Unheard Voices: The bleachers are lovesick

Unheard Voices: The bleachers are lovesick 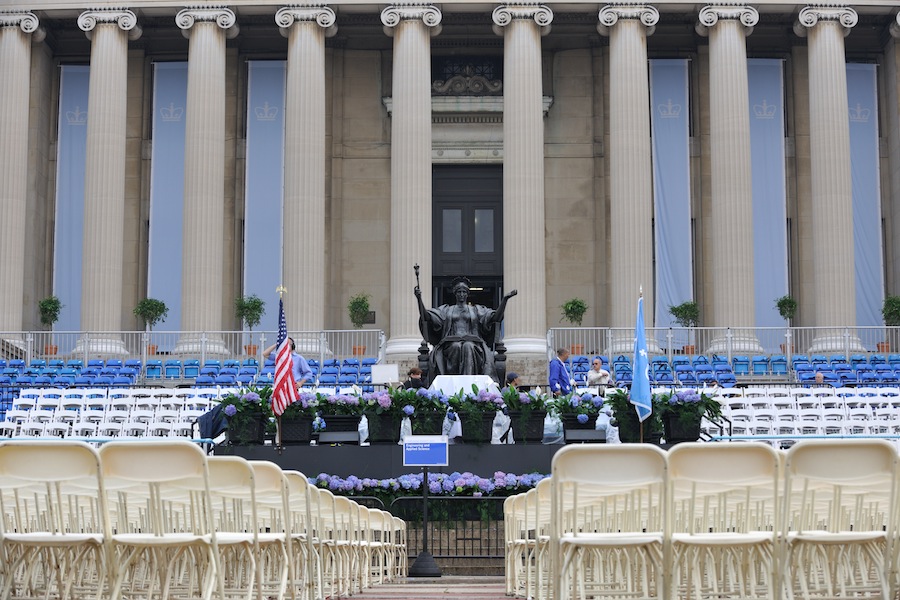 In her weekly series, blogger Rebecca Farley lends a platform to the university's unheard voices. This week, she sat down with her first repeat guest, the graduation bleachers.

Every year, come spring, Columbia students celebrate as the lawns become a site for frisbee playing and general lollying about. But all good things come to an end: the lawns, the last bastions of student fun on campus, are now covered by the graduation bleachers, our yearly visitors. However, the bleachers are kindlier than they seem. Yes, they take up enormous amounts of space on campus. Yes, they increase cross-campus travel time by about two minutes. No, you can't make a fort beneath them. But they're good fellows. They like graduation. They like Columbia. They're very sorry for the trouble they cause.

"It's really a shame that we arrive under such annoying circumstances," says one bleacher. "I just have a feeling that if we met under different circumstances, we'd all really get along."

"Yea!" another bleacher pipes in, "Listen, I love 'Game of Thrones,' I think Surf and Turf is the best day of the year, and I thought Big Sean was kinda underwhelming. I'm with you guys! I just think if the students gave us a chance they'd really like us."

The bleacher shrugs. "I mean, I've seen him in the past and he's always been underwhelming. I like his earlier stuff though. Did you go to Governor's Ball in 2010?"

The bleacher nods emphatically. "Make fun of us as much as you want, but the bleacher life is kinda fantastic. We get to watch marathons, presidential inaugurations, Shakespeare in the Park, soccer games--we're the omnipresent spectators!"

Another bleacher to my left rolls his eyes. "He's been rehearsing that speech."

"It's true!" the first bleacher protests.

"No." The grouchy bleacher creaks in the spring wind. "We're not spectators. We support the spectators, which means we have to deal with smelly butts and really pointy high heels."

The grouchy bleacher nods. "He says we're spectators, but the truth is that we can hardly see the speakers at graduation. I usually take a long nap. And I mean long. That shit lasts forever."

With that closing statement, the grouchy bleacher closes his eyes and excuses himself from the interview.

"Ugh." Another bleacher speaks up. "He's such a bitch lately."

The first bleacher looks sheepish. "Give him a break. Times are tough, I think."

"What's tough about it?" I press. Everyone knows bleacher gossip is the best type of gossip.

The bleachers stay silent for a moment, ignoring my question. One bleacher clangs a bit to fill the silence.

Finally, a bleacher from the back chimes in. "He's in love."

"Shhhhhh!" Another bleacher hurries to quiet the brave little bleacher. "He doesn't know what he's talking about." To the bleacher in the back, he says, "You mind your own business."

I am baffled. Who could possibly the object of a bleacher's affections?

"She's graduating, that's the thing. Do you know an Orli Matlow?"

I nod emphatically. The bleacher in the back gives an indicative nod.

Times is tough for bleachers in love.

Rebecca Farley is a junior who would like to give a shoutout to Orli Matlow, the one and only true love of the commencement bleachers.