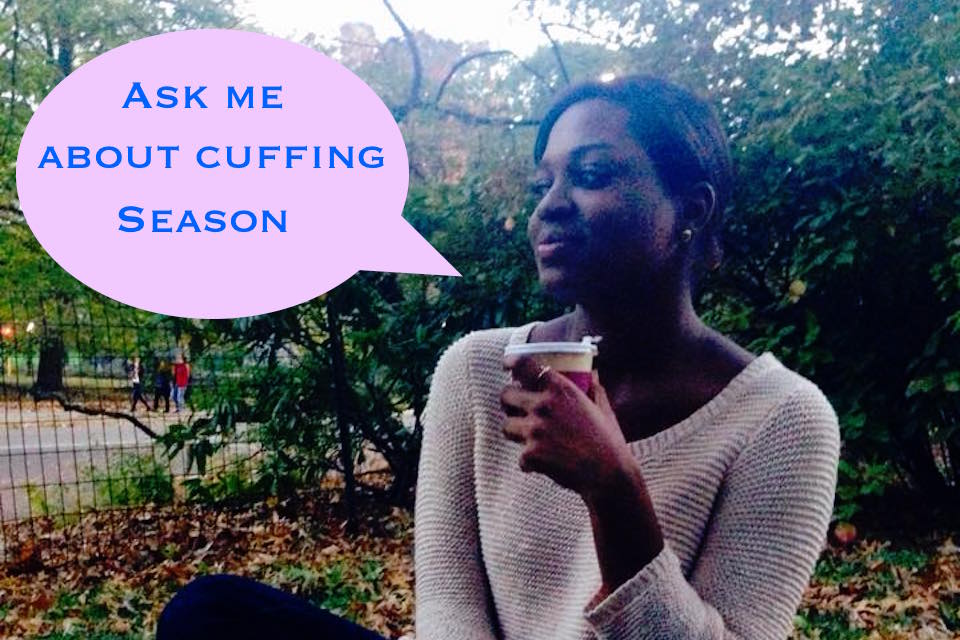 Camille Sanches, cuffing season meteorologist, enjoys a cup of coffee while considering the effects of the warm weather on cuffing season

Let it be known, henceforth, that Spectrum, the blog of the Columbia Daily Spectator, has a cuffing season ~*~expert~*~ on their hands.

Camille Sanches, CC '18 and a current Associate Spectrum Editor, was recently interviewed by the "New York Times" (you've heard of them, right?) about the time of year when we see, to quote the rapper Fabolous, "summer hoes turning into winter wifeys."

The phenomenon can best be explained as such:

The weather gets colder.  The days grow shorter. The night is dark and full of Tindrs.  "Netflix and chill" becomes "Netflix and hibernate until Bacchanal." Ergo: that summer hookup becomes your winter S.O.

Earlier in the semester, Ms. Sanches (who, here at Spectrum, we just call "Camille"—we're casual that way), advised the CU community on how to prepare for cuffing season. Her advice? Look like a 10. Make business cards. Go to Mel's. Go to the Heights. Go everywhere. Cuffing season is serious business.

The "New York Times" took notice and reached out to Sanches for their most recent stuffy-newspaper-tries-to-understand-young-people piece (see: "For Posterior's Sake" and this piece on "ghosting").

The old fart "New York Times" wanted to know: What is cuffing season?

"People want a stable and constant hookup they can kind of rely on," says Sanches in the article. The article kindly notes that Sanches is "focusing on her schoolwork instead of finding someone to cuff (it's also midterm season, after all.)" Head's up, bud—that applies to most the Columbia community.

It's also important to note that the awkward weather we've been experiencing isn't just frustrating in a general sense—it's also sexually frustrating. What happens to cuffing season when no one's even wearing pants yet?! You can't cuff a pair of shorts, even if they're a nice pair of salmon chinos.

Here's to hoping there'll be a winter storm (or even just a nice chill in the air) to push cuffing season into full swing. Have any questions? Ask Camille Sanches. She's got the 411.