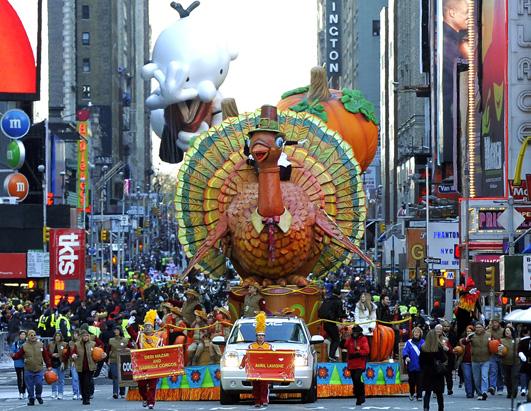 Ah, Thanksgiving. One of the greatest, most treasured holidays in the good ol' US of A. Who doesn't love sitting around a table with your extended family, answering question after question (no, I don't have a boyfriend. Yes, I'm majoring in Yiddish Studies. No, I don't know what I'm going to do with my degree, but thanks for reminding me) and stuffing your stomach until you can barely move? I know I sure do!

But all of that changes once you move over a thousand miles away from your hometown and family. Suddenly you're left alone in New York City with a single high school friend to give thanks with.

Just one person with whom to spend your very underwhelming first Thanksgiving in NYC...

The day starts in the worst way — early.

The 5:30a.m. alarm goes off, but I turn that shit right off and go back to sleep. The 6:00a.m. alarm follows after what feels like five minutes later (but must have been 30 somehow??) and it's go time.

We make our way to the subway station and hop on the 1. It's so crowded that I don't even have to hold onto anything because we're so densely packed that I wouldn't be able to fall. It's pretty uncomfortable and kind of convenient, I guess.

Once we finally get out of the sardine can, we struggle to find a spot to watch the Macy's Thanksgiving Day Parade. This turns out to be a nearly impossible task. All the streets and avenues are blocked off. We ask volunteers where we can watch the parade from. They ask us if we have tickets.

What? Tickets? To a public parade? Of course not! Why TF would we buy tickets??

The volunteer tell us that means we have to "go uptown and then cross over," ... whatever that means. He makes vague gestures with his arms and hands and tries to point us in some direction. This just adds to the confusion. We slowly walk away and disappear into a sea of other potentially ticketless parade viewers.

We eventually (miraculously) arrive at a place along the parade route. It's already crowded with a solid wall of people sufficiently blocking our view of the street. We decide to try our chances at walking further down the route. We're stopped abruptly at the end of the block by fencing and volunteers. We settle in right there and wait.

All of the standing hurts our feet, so we decide to sit down on the sidewalk (ew).

We play hangman on the brown paper bag that we had from a Dunkin Donuts detour on the way to our perch. Time passes slower than usual, but eventually we decide it's time to stand up. Once we're off the ground we notice that everything has changed. There is a significantly greater number of people surrounding us than before.

We're reminded of the subway ride and become sad.

Finally, the first float is in sight. The parade ensues and we enjoy the various acts, bands, balloons, and celebrities, (but we don't enjoy the clowns. Why are there so many clowns??) It is an alright experience watching the parade in person, but, honestly, it is pretty underwhelming.

All the bands decide to rest in front of us.

Not one of the marching bands played a note within our ear shot. None of the celebrities even sing. When Jordin Sparks comes by, no one can tell if it's really her or not. Everyone around us begins whispering, "Is that Jordin Sparks?" We're still not entirely sure.

When Mariah Carey's float comes by, she's sitting down in her chair. She's not even standing up to wave. She even calls her hair and makeup crew over to her to primp her up for the end of the parade.

The parade ends with the Santa float (slight confusion ensues because isn't this a Thanksgiving Day parade?) and we are left somewhat unfulfilled. It's nice to be able to check it off the bucket list, but was it worth all this? Questionable.