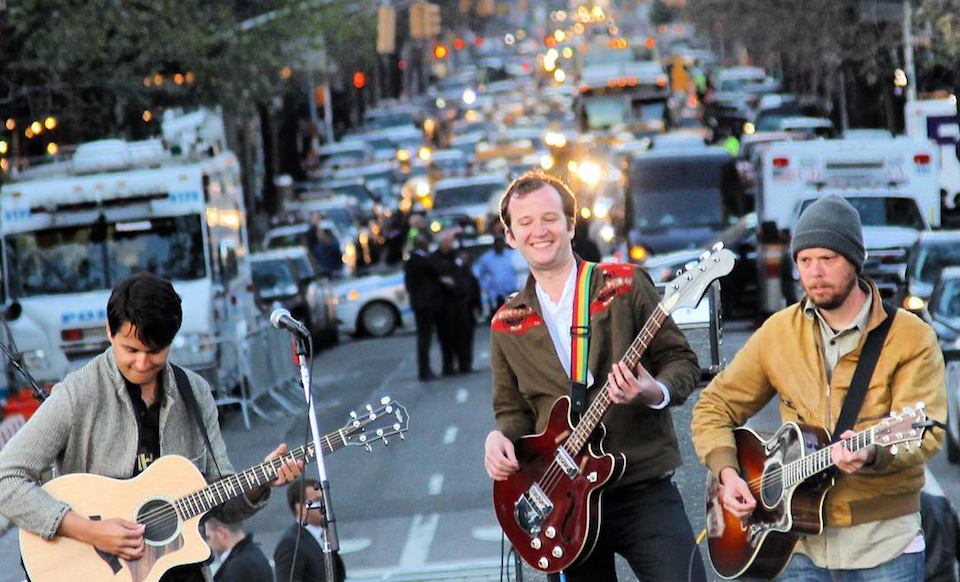 With the New York primaries coming up on April 19, voters rallied for Bernie in Washington Square Park last night. Because he's ~hip~, Bernie had Columbia alums, Vampire Weekend, opened for the rally (along with one of our acapella groups, the Metrotones).

This actually isn't the first time the horchata-loving band has opened for Bern, which makes us wonder—has Vampire Weekend felt the Bern long before Sandy was White House-bound?

It may never have clicked for you, but there are actually substantial overlaps between Senator Sanders' beliefs and the band's lyrics that we couldn't help but notice.

If anyone in this presidential election is a Contra it's definitely Trump (sorry Trump luvers). Bernie, who undoubtedly listens to Vampire Weekend on loop, probably mutters "Contra" under his breath every time Trumpy passes.

Maybe the rally was really a way to make Contra a mainstream curse word. Free education and lingo for all.

As semi-woke millennials, the members of Vampire Weekend are more than aware that racism is prevalent in America. In this lyric, lead singer Ezra Koenig even wonders if his musings on preppiness have colonial undertones. Bernie, too, has said that racism has no place in politics.

“The gloves are off, the wisdom teeth are out / What you on about?” — Step

If we have learned anything from this election, Bernie is a hard-core baller who'll rip off his gloves and take his haters to court. We are 99% (because of the 1%, am I right?) sure that Senator Sanders listens to Step as his hype song before shooting hoops. President Obama is going to have to watch out because there might be a new resident White House Baller.

“You were born with ten fingers and you’re gonna use ’em all.” — Cousins

If musicians and politicians have one job, it's definitely to remind us to live up to our full potential as human beings. Bernie and Vampire Weekend have done an adequate job doing so and for that, I am thankful.

“You take your time, you lion” — Young Lion

Okay, Bernie might not actually agree with VW on this one because if you take your time registering to vote you're going to end up like Ivanka and Eric Trump and won't even be able to vote in the primaries.

(Don't forget to register! If you're from New York, you've taken too much time, young lion.)

“Who will guide us through the end” — Everlasting Arms and “Hold me, in your everlasting arms” — Worship You

This is less what Bernie would say and more what the bird who flew onto his podium was probably thinking. Did the band have visions of Bernie dancing in their head when they wrote the songs? Will the Everlasting Arms become the alternative national anthem if Senator Sanders wins?

Regardless of who you support, you can't deny that the parallels between the Bern and Vampire Weekend are pretty neat. Check back during Kanye's campaign in 2020 when we map out his foreign policy plan with the lyrics from "808s & Heartbreak."