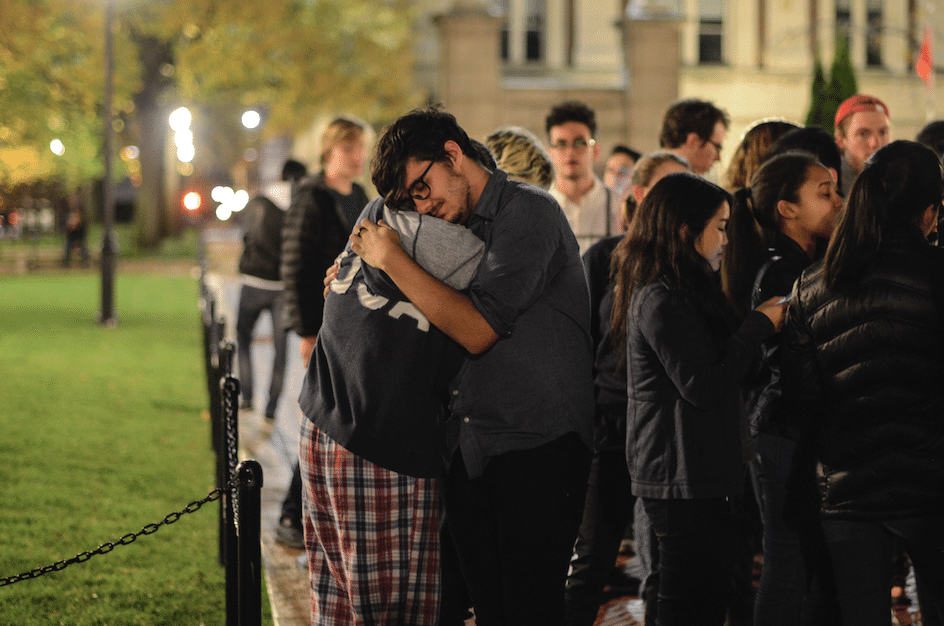 The news on campus today was pretty much the same across the board: While many of us thought we’d be waking up to greet our first female president, the electoral college swung unpredictably in favor of Donald Trump.

A lot has happened over the past 48 hours, not just in terms of the election, but also in terms of CU's response. Over 200 students took to College Walk to scream "Fuck Trump!" Even more signed a petition to cancel classes (and some profs did take their students' advice). Two high-up figures within Columbia's administration—PrezBo and SuGo (we're trying to give Suzanne Goldberg her own nickname)—had a thing or two to say about Trump's election.

So, let's say you haven't read any of the reporting yet—we'll get you up to speed swiftly and chronologically.

Group scream against Trump on College Walk in wake of elections Early Wednesday morning, as Clinton’s chances started looking slim, five students made a Facebook event calling for students to unite on College Walk and vent their frustrations in the form of ear-piercing screams.

Columbia students reel from shock of Trump victory At one in the morning, over 200 hundred students took to College Walk to scream, cry, hug, and find solace in one another. "Fuck Donald Trump" may have been the most popular words of the night.

Video footage from College Walk's scream This was the scene during the scream, also featuring some of students' frustrations and anxieties.

Chapter 2: The effect on academics

Barnard didn't institute college-wide class cancellation Though some professors did ultimately decide to cancel classes or postpone midterms, no official decision was made to cancel all Wednesday classes.

Bollinger responded to Trump's victory In an email sent out to all CU students, PrezBo urged us to return to our "fundamental values" (i.e., freedom of thought, tolerance, etc.) in these difficult times.

Suzanne Goldberg "reflects forward" We as a community must "pause and affirm our shared commitment to learning and discovery, to our diversity as a strength, and to inclusive community as a core Columbia value." Also, there are a bevy of counselors on the Morningside, Medical Center, and Barnard campuses, poised and ready to offer support.

Barnard students lament their shattered dreams of first female president in 2016 Many students chose Barnard over other schools because of its empowering atmosphere for non-cis-males. How, then, have students reacted since the possibility of having a female president seemingly all but disappeared overnight?

How did this happen?! Both Columbia and Barnard held town halls to discuss the politics behind Trump's election and how we can now mobilize for the causes we care about.

What you can do now… Members of the Roosevelt Institute have recommendations on how you can can influence local, state, and national policies as a Columbia student.

Just remember: Lean on the resources here at CU, whether that be in the form of counseling, partaking in panel discussions, or just talking about it among one another. Additionally, keep checking back on Twitter, as we'll be letting you know about new safe spaces as we hear about them.

Veronica Grace Taleon is Spectrum’s deputy editor and a Barnard sophomore. She’s devastated, same as almost everyone else, but she’s reminded of that quote from The Great Gatsby, “So we beat on, boats against the current.” Reach her at veronica.taleon@columbiaspectator.com.