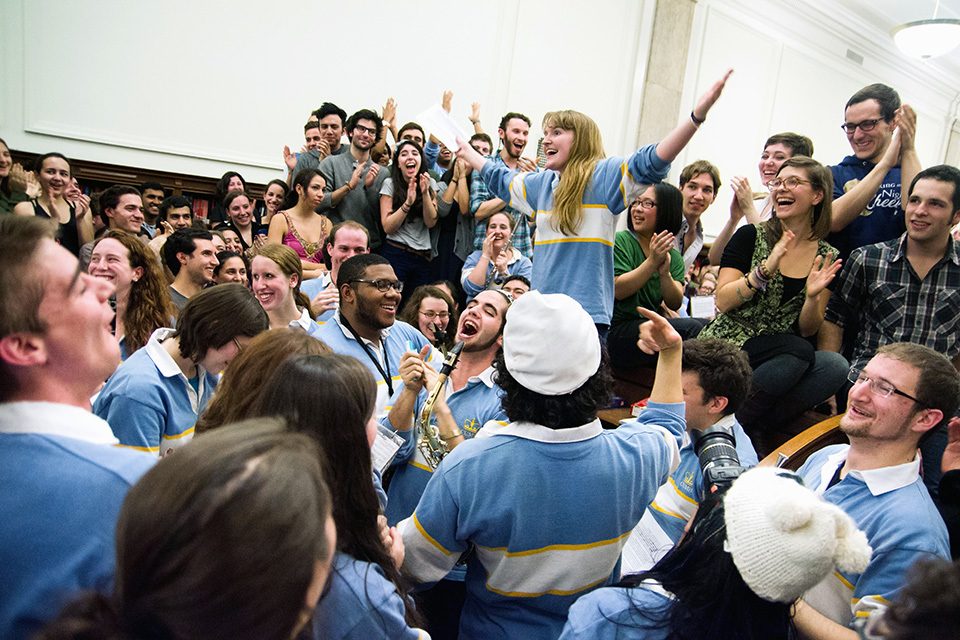 It's become a Spectrum tradition that we live blog (and more recently, live video) Orgo Night each and every semester. We clump together with the rest of you, fight for a good vantage point from the desks of Butler 209, and exchange sweat with our fellow students. You know, the usual.

But things are obviously different now that the marching band has been denied access to Butler 209 and is planning on holding its performance outside of the library in protest of the administration's decision.

We'll still be there, freezing in the 21-degree weather with the rest of you, typing and filming away for our live blog and video. If you're too lazy or too busy studying to venture out into the cold, you can check out our Facebook page around 11:30 p.m. for all of our Orgo Night material.

If you're attending but don't know much about this year's Orgo-gate, we've got you covered for that as well. Read on for a summary of the controversy surrounding this campus tradition.

One of the few traditions we have at Columbia, Orgo Night has been a performance by Columbia's marching band in Butler 209 for the past 40 years. It used to occur the night before the legendary organic chemistry exam—hence the name—but nowadays it's generally the night before the first day of finals.

This year, however, the administration decided to throw a wrench in the tradition by moving the band out of Butler 209 and to some other, less iconic location (for a while, it looked like it would happen in Lerner).

Liz Pudel, BC '17 and CUMB head manager, insisted that the Butler location was integral to the whole performance. "Butler 209 is so central to the issue because students are there cramming for finals. If it were anywhere else, we wouldn't be reminding them that cramming for finals isn't healthy and reminding them why Columbia is great—and it's not because of our grades. It's because of the community that we build."

As they say, the show must go on. Tonight's Orgo Night is not just a continuation of a campus tradition—it's a protest of the administration's decision.

According to Pudel, the decision has "far more implications than administration would like us to believe it has. … This is something that undermines students' right to free expression." The administration, however, is adamant to "protect students' ability to study for their final exams," and stands by its decision.

As the title suggests, Bollinger chose to side with the administration's decision to keep CUMB out of Butler 209. This may come as a surprise to many students. (I mean, he is a leading scholar in First Amendment Rights, and his class "Freedom of Speech and the Press" is one of the most popular on campus.)

However, PrezBo claims that the administration's decision is rooted not in the content of the event but rather in the fact that there are always  "a number of objections and complaints by students of disrupting study time at this critical time of the year."

In the 141st Editorial Board's first staff editorial, Spectator voices its opinion on the Orgo Night debacle. The brief breakdown: It's important, especially this year, that we support free speech and forums for discussion, even if we do not necessarily endorse the content of that speech.

While the administration emphasizes that the main issue is the location of the event, Elise Fuller suggests that it's more about the controversial jokes themselves. It's no secret that CUMB refuses to adhere to political correctness year after year. When a marginalized group makes fun of itself, it's a way of fighting against the oppression it faces—but when CUMB does it, it feels mocking.

Recent alumnus Mikhail Klimentov, CC '16, former CUMB poet laureate and Spectator Editorial Page Editor, mentioned that the administration's decision represents a larger power struggle between the University and its students. Klimentov called on students to push back against the decision to relocate Orgo Night.

OP-ED: Suppression of expression does not become Columbia

Not-so-recent alumnus and current Columbia parent Kevin G. Chapman, CC '83, called the ban "implicit censorship." Attendance is voluntary, he mentioned, so the only people disrupted by Orgo Night are those who choose to be there. He encouraged students not to allow such a ban to occur, mentioning that if he were still a Columbia student, he would be leading the charge of CUMB members into Butler.

OP-ED: The implications and opportunities of Thornton’s Orgo war

There are three main points mentioned in this column: First, you may not like Orgo Night, but how would you feel if the administration barred you from protesting something you were against? Second, the administration can't win: It either gets accused of suppressing free speech or accused of not caring about minority groups. Third, if you're against the marching band's performance, host another comedy event elsewhere.

There are many arguments being made both in favor and against Orgo Night, but hopefully now you've heard a bit from each side. Regardless of what you decide to do tonight, enjoy the evening. If you want to keep up with our coverage, check our Facebook page around 11:30 p.m. for updates.