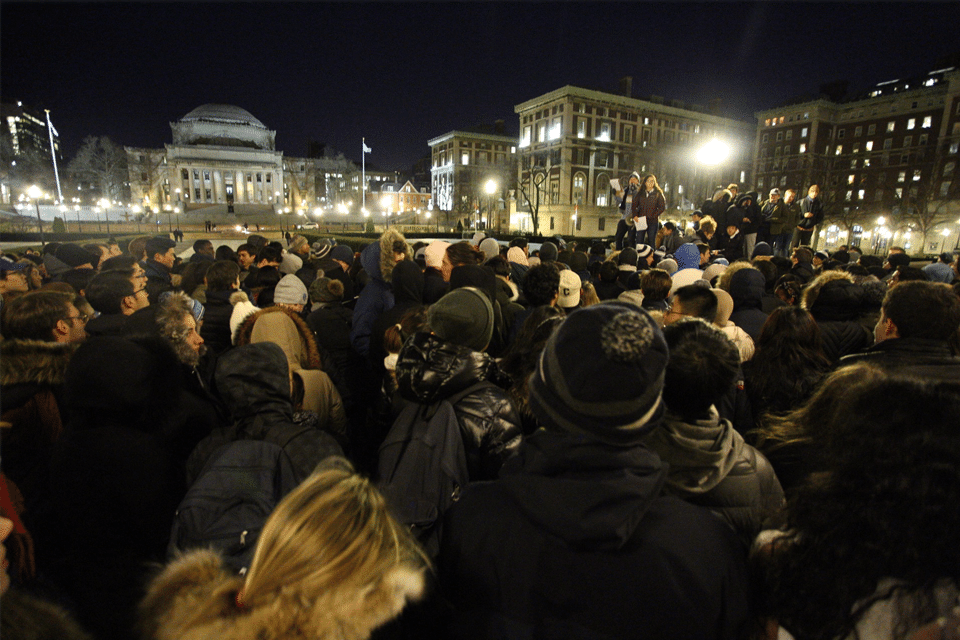 No, they didn't rush Butler. Yes, everyone froze their asses off.

While Spec's News team follows CUMB around on its post-Orgo Night campus march, Spectrum's already shacked up in SIPA putting together the evening's best jokes for those of you who didn't turn up and couldn't be bothered to check out our live coverage.

We've got this semester's Orgo Night's most ~*memorable*~ (i.e. the good, the bad, and the ugly) jokes lined up for you.

If anything, a phallic imagery warning for Big Sub may just incentivize people to come.

"The most recent War on Fun started with the Barnard guest policy, because what are security guards for if not slut shaming? Then they decided to corral us like animals at Bacchanal, the tame excuse to day drink. And now, Orgo Night. We in the band have to ask, what's next? Will a Public Safety officer be stationed outside 1020? Or Is Big Sub going to be hidden behind content warnings for phallic imagery?"

"In the hazy morning after the election, we Columbians shuffled home on our walks of national shame, wondering if we had Trumpomoniasis or Hepatitis Orange."

If Rob Goldberg could fix printers on campus, that would actually be a big help, tbh.

"Barnard's diverse students deserve a president that makes them tingle in all the right places, not a cis white man who looks like he fixes printers for a living."

The Ivy League in general

Well, that's what they get when they go to college in New Jersey.

"Princeton hookups might think they're the hottest thing since sliced bread, but unfortunately, they're exactly as hot as sliced bread. And just as white."

We know nothing about sports, but we thought basketball players were the ones handling balls…

"When Bwog published leaked messages from wrestling team seniors, the biggest surprise was that apparently wrestlers can both read AND write! In these messages, the wrestlers were confused that Columbia women don't 'beg for the cock,' since their sport requires that they fondle ballsacks at every opportunity."

"It might not look like it, but we in the band are actually all econ majors—literally all of us—and we are seriously worried about the state of our meme economy. The memeflation has caused a bull market... Or BULLSHIT market. Meme currency is hyperinflating to the levels of Harvard's grades, and memeconomists know this trend can't continue forever. If you look at the memeconometrics, you would realize that from the solvency curves, the marginal utility of unexpected losses is decreasing due to the monopoly of diminishing returns. In other words, Goldman Sachs, please hire me."

Enthused? Sickened? Bummed about all the politics surrounding Butler 209? Well, there's no time for that now. Buckle down, do your finals, and we'll be at it again in May for the next Orgo Night.