What went down at CUMB's inauguration performance, “Urine Good Hands”

What went down at CUMB's inauguration performance, “Urine Good Hands” 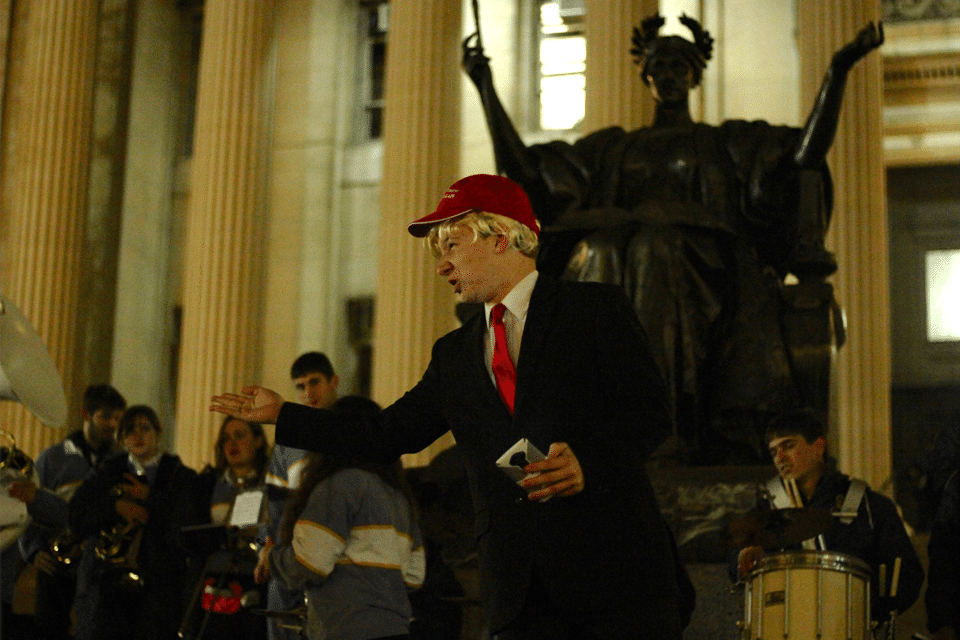 On the evening of Jan. 20, just nine hours after Donald Trump was sworn in as the 45th president of the United States, the Columbia University Marching Band took to Low Steps to give their own interpretation of the day's events … in true CUMB fashion.

There were two main actors: "Supreme Overlord" Vladimir Putin (Liz Pudel, BC '17), who promised to "faithlessly excrete on the office of the president of the United States" (the only one clapping at that: Trump), and "First Lady" Donald Trump (Ross Chapman, CC '18), who swore to "incessantly tweet and have the maturity of a four-year-old.

Both the Supreme Overlord and the First Lady were sworn into their respective offices, gave speeches, and were serenaded by the marching band with a tune that fit their MO. Putin: "Dynamite." Trump: "Barbie Girl."

But after a few minutes of the performance Trump and Putin seemed to be done. The band called it a night at approximately 9:30 p.m. and exited the scene by marching around the west side of Low to the tune of "Roar, Lion, Roar."

What did you think of CUMB's jokes and portrayals of Putin and Trump? Let us know on Facebook, Twitter, or Snapchat @CUSpectrum.