Bummed that you’re missing Bacchanal? Here’s how you can still enjoy the day

Bummed that you’re missing Bacchanal? Here’s how you can still enjoy the day 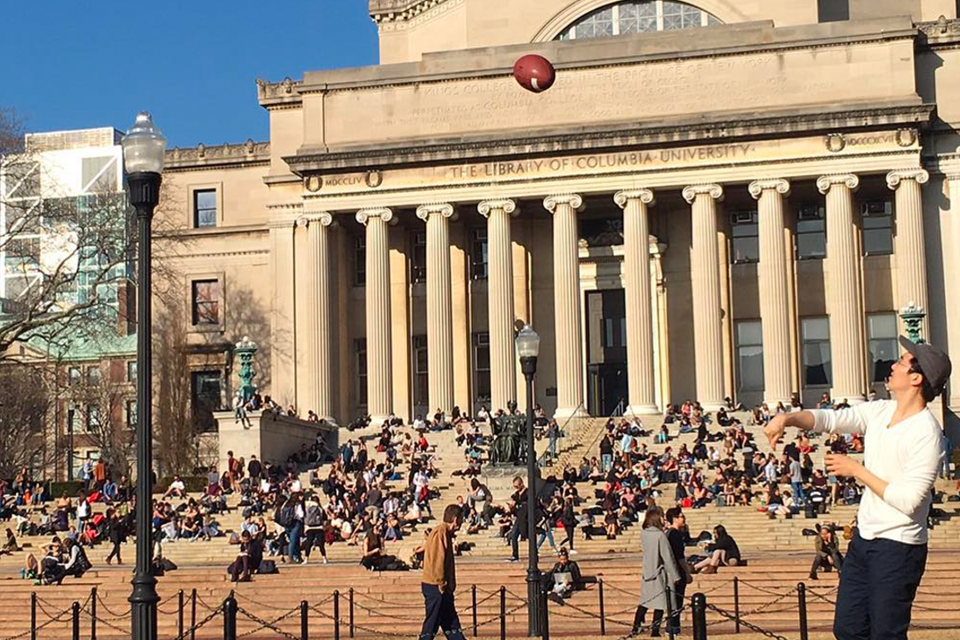 Try after try, you can’t seem to nab a ticket to Bacchanal. Sure, if you wanted to go, it sucks, but there is some good news. Obviously you won’t have to brave the mosh pit in front of Low or have your personal space and hygiene compromised by countless drunken strangers. Also, there’s still plenty of ways to enjoy the Bacchanal experience and even find a great view to watch the show. All you need is a little creativity.

Why look over thousands of people’s heads when you can survey the whole scene from over campus? If you’re determined not to resort to studying amidst the booming music across campus, try climbing a few flights of stairs in the buildings surrounding Low Library (so Kent, Hamilton, Dodge, even Butler [though they’re not really “surrounding” Low]).

So on the day of the concert, find a free classroom in one of the aforementioned buildings. (Though if you’re Barnard, you’ll have to find a Columbia pal to let you in—on the weekends, the buildings usually need to be swiped into with a CUID). I’ve scoped them out and found some pretty decent vantage points on the seventh floor of Kent and the eighth floor of Dodge… Could be worth a shot.

Sitting on the lawns

Sure, you’ll be stuck with a ton of other people who weren’t able to get tickets, but this definitely has potential—take it from me. I’ve spent my last two Bacchanals on the lawns and didn’t consider it bad luck. You could listen to the concert while hanging out in front of Butler, or really anywhere else on campus, as long as the weather’s nice.

A ton of people will be packed on Butler lawns, but if you want something a little less explored, try the lawns in front of Dodge and Math. The music can still be heard, but it’s not as distinct as if you were right in front of the stage at Butler. However, the energy and excitement are still there, and you won’t have to fight through a sweaty hoard of concert-goers or hang out with a ton of strangers near College Walk.

Going to parties on campus

There’s no shortage of these before and during Bacchanal. This option is obvious but still worth it, including for those who occasionally like to embrace the traditional college student lifestyle and go to darties (that’s day parties for those not in the loop). You also will be spoiled for choice, as there’ll be a ton of party options on campus (think friends, frats, etc.).

Meandering around campus could be fun if you can’t get right in on the action. It’s exciting just to be around and enjoy the day when there’s more energy in the air than ever. You can listen to the music and just take some time to relax and appreciate the momentary dissipation of stress and seriousness on campus.

Going out to eat

Bacchanal could be the perfect time to venture off campus and try out that restaurant, café, or brunch place you’ve wanted to go to all semester—you’re probably not going to be able to get any work done if you stay on campus, anyway. You’ll find a lot of people just wandering around Broadway on the day of Bacchanal, so places around campus have more of an air of festivity about them than usual. And if you’re super bummed about missing the concert, you can at least assuage your frustration with good food.

The mosh pit isn’t the be-all and end-all of Bacchanal—there’s plenty more to do besides hitting the library if you didn’t get tickets. You probably deserve this day to relax and have fun, so hopefully these suggestions may inspire you to make the most out of this weekend and turn your luck around.

Have any other ideas on how to make the most of Bacchanal without tickets? Let us know on our Facebook, Twitter, and Snapchat at @CUSpectrum.

Tina Watson is a Spectrum trainee and Columbia College junior. Maybe this year she’ll progress from the lawns to Hamilton during Bacchanal. Reach her at tina.watson@columbiaspectator.com.