Don’t just wing it: Set up a finals study/relaxation schedule that you’ll actually stick to

Don’t just wing it: Set up a finals study/relaxation schedule that you’ll actually stick to 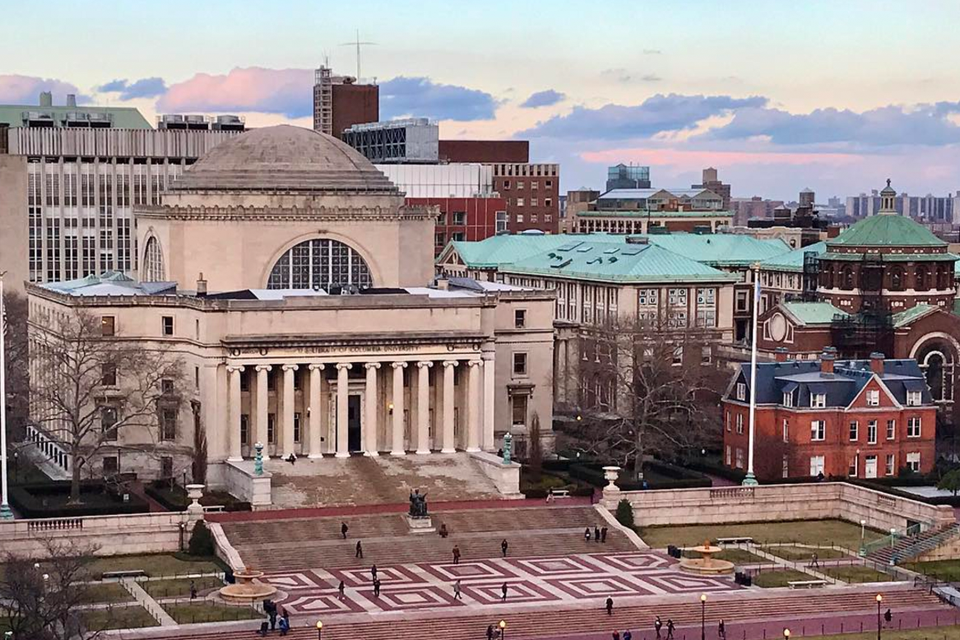 Oh dear, it’s already Wednesday. This time next week, we’ll all be up to our heads in readings we didn’t do during the semester, cups upon cups of caffeine, and prayers for finals to come so we can just get it over with.

Yes, finals are hard, but make them as stress-free as possible by doing a bit of planning ahead. The key to getting through the next few weeks relatively smoothly is all in how you delegate time. Cram last minute and you’ll be miserable, no doubt. Set up a schedule and sure, you might still worry about your exams and essays, but at least you can take comfort in the fact that you’ve done the best you can. Here’s how you can devise a study (and relaxation) schedule for reading and finals weeks—one that you can actually stick to.

All of your school email accounts use Gmail, meaning that you have Google Calendar hooked up to them already. Go there.

First, pencil in your final exams

If you don’t know when they are yet (shame on you), check out the schedule now (Columbia, Barnard). Put them into your GCal under a single color. 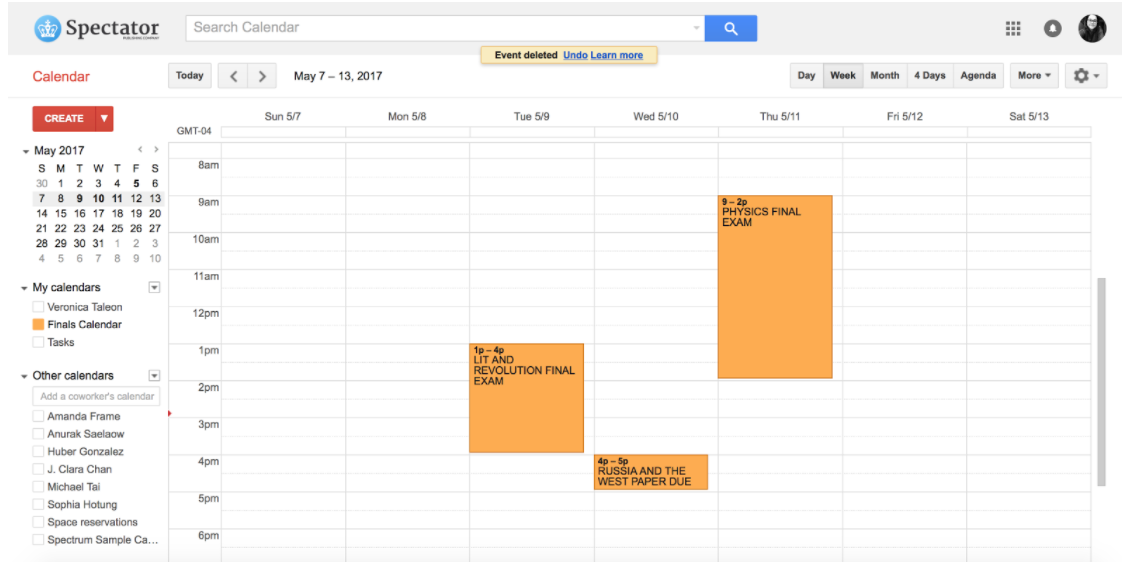 So far, so good

Then, consider any other obligations you have for the week

Your first priority is your exams, then come any other events that you have to go to during the week. Schedule those events into your calendar in a different colour than the one you just used. For instance, my parents are coming into town and we’re going to see a show on Thursday, so I know I’ll have to block off that entire evening. It’s important that you know what obligations you have so you can adjust your schedule accordingly and make up for the missed time. 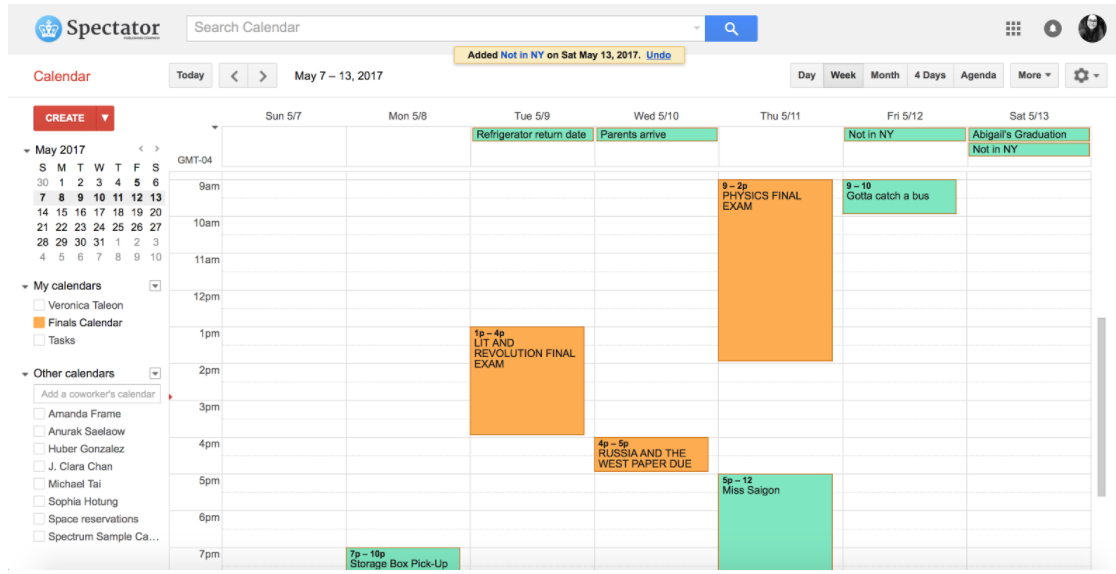 Figure out when you want to relax

Yes, we’re actually building a schedule around when you want to not be studying. Your detoxing time will be different from my own—it really just depends on when you think you’re most productive. I, for instance, cannot be counted on to do any work past 8 p.m. I get restless and bored by that time. Since I already know that I’m going to be very unproductive during that time, I make up for it during the day.

Schedule in your relaxation times in a new color. 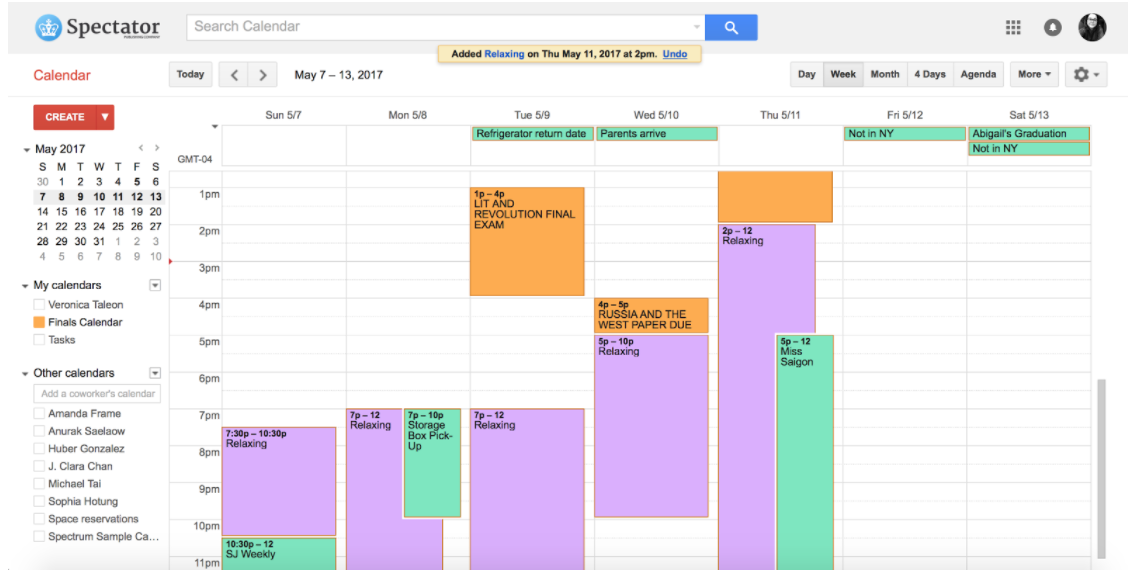 Roughly map out when you’ll be studying

Now we can hit the books. Things might switch around a bit, but just have a rough idea of when you’ll actually be studying. Make sure you account for mealtimes as well. Your studying slots should be a different color from everything else, and I’ve put meals in the same purple as my relaxation time. 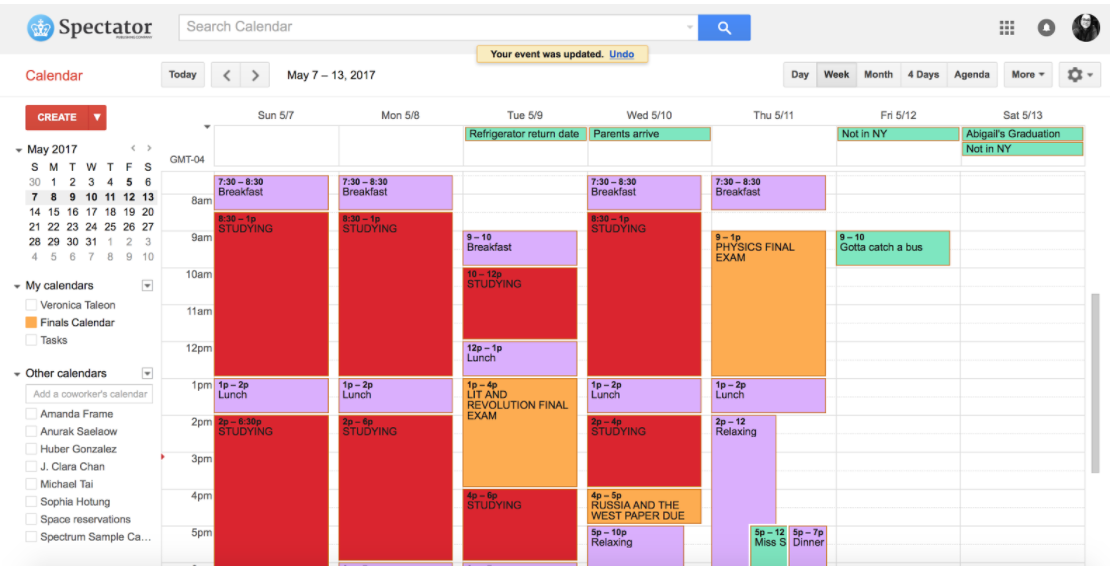 Divide your designated studying time into smaller chunks for each subject

I find it’s most effective to focus on a couple of subjects per day, rather than making Monday my designated Lit Hum day, Tuesday my designated FroSci day, etc. Now, in different colors (one color per subject), roughly figure out when you’ll be studying what. Make sure you take into account when the exam is, though—you’ll probably want to focus more on an exam that’s sooner rather than later. 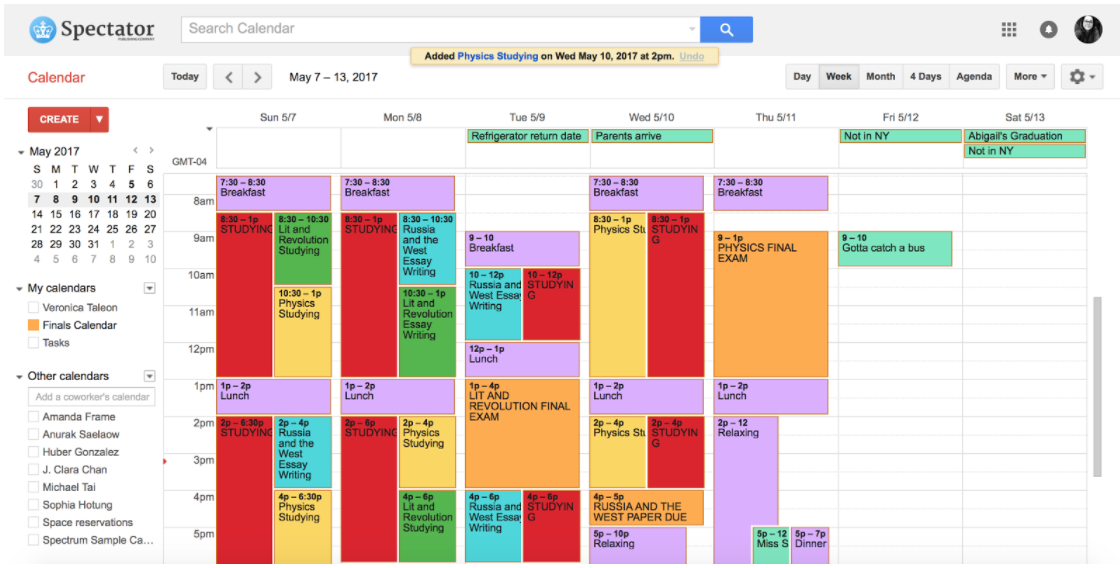 Yes, yes, the colours are terrifying, but they help you better visualize your week, I promise.

I can tell you how to set up your study calendar, but sticking to it is completely up to you. Right now, my schedule probably looks daunting to an outsider (a lot of you are probably thinking, “She’s never going to be able to follow through with that”), but when making these, you have to consider your preferred method of studying. I, for instance, work by the philosophy of 15 minutes of break for every 45 minutes of studying. I turn on a website blocker, like SelfControl, and plug away for three quarters of an hour, so the five-hour blocks of studying you see on my cal aren’t purely studying—they’re 3:1 study-to-break ratios, repeated pretty frequently.

But this tactic might not work for you—you might feel more productive if you have longer (but fewer) breaks scheduled throughout the day. If that’s worked for you in the past, make sure not to mimic my schedule, or else you’ll be miserable—schedule in your breaks where you best see fit.

It’s all fine and well to set up a calendar for reading and finals weeks, but it’s just busy work if you don’t actually follow through with it. Some people are better at self-motivation, that’s just a fact, but if you’re concerned about your ability to make the most out of your study days, there are a couple of ways to hold yourself accountable.

The only person in control of your actions is you, so ultimately, it’s you who decides whether the things you hope to accomplish in a day get done. There’s no easy solution to making sure you don’t procrastinate, but you can start off by tracking your progress and seeing just how successful you are from day to day.

This is a doc I made to see how many hours I’d ideally like to spend on each subject, and then each day I’ll return to it to see if I accomplished my goal. If I start seeing a bunch of “NO :(”s accumulate, I’ll probably feel pretty bad and unprepared, whereas if I actually power through and get to write down a “YES” at the end of the day, I won’t be so hard on myself.

However, it’s also important to note that you have to be kind to yourself: Things happen, and if a day or two go by and you don’t meet the goal you set for yourself, it’s not the end of the world. So don’t beat yourself up over a couple of missed targets—it’s really only an issue if there’s a “NO :(” on every day of the week.

Get the squad on board

Studying in a group is probably one of the most effective methods to beat procrastination. I’m not strictly talking about a group where you all study for the same class—I’m more talking about finding a friend or two and hitting the library together. If you can sync up your schedules, that’s even better, because then you’re forced to start studying at one point, relaxing together, and then actually returning to work when your break is up.

Sleep, eat, and be well

Making sure you’re feeling top-notch is crucial to staying motivated through reading and finals week. If you feel like crap all the time, you’re not going to want to do anything.

Get a decent night’s sleep first. On my schedule, I’m going to wake up at 7:30 a.m. each day, but I’m also going to bed at around 11 p.m., meaning that I’m getting a decent eight and half hours of sleep each night. Additionally, on the days when I have finals, I plan on sleeping in a bit more if I can, just to make sure I’m as well rested as possible.

(And yes, I know a lot of you are probably going to be like, “It’s finals, no one sleeps a full seven hours,” but I’m telling you it’s possible if you just plan for it. If you start procrastinating, of course it’ll be much more difficult.)

A decent diet is also important, so first make sure you schedule in those meal times (all three of them if you can), but then when you go to the dining hall, consider making a healthier decision than you ordinarily would. Perhaps forgo the mozzarella sticks at JJ’s Place and go for soup and a sandwich at Ferris. Instead of getting your traditional fry-up at breakfast, get some oatmeal or a hard-boiled egg. Anything that you think will keep your immune system up is a plus. (But if you think you’ve done well today, got everything that you wanted to accomplish done, etc., it’s probably productive to reward yourself with a treat from John Jay’s dessert station.)

Finals are a pain—you know it, I know it, PrezBo knows it. But that doesn’t mean that they inherently have to be panic-inducing. Yes, you may feel stressed, but if you set yourself some goals each day and make a genuine effort to achieve most of them, you can go into your final knowing you’ve done everything you could. (Plus, if you power through, summer vacay is at the end of the tunnel.)

Have any other questions about how to stay on track during reading and finals weeks? Ask us on our Facebook, Twitter, or Snapchat @CUSpectrum.

Veronica Grace Taleon is Spectrum’s Editor and a Barnard sophomore. She pretty much GCals every day of her life like this. Even in the summer. Reach her at veronica.taleon@columbiaspectator.com.