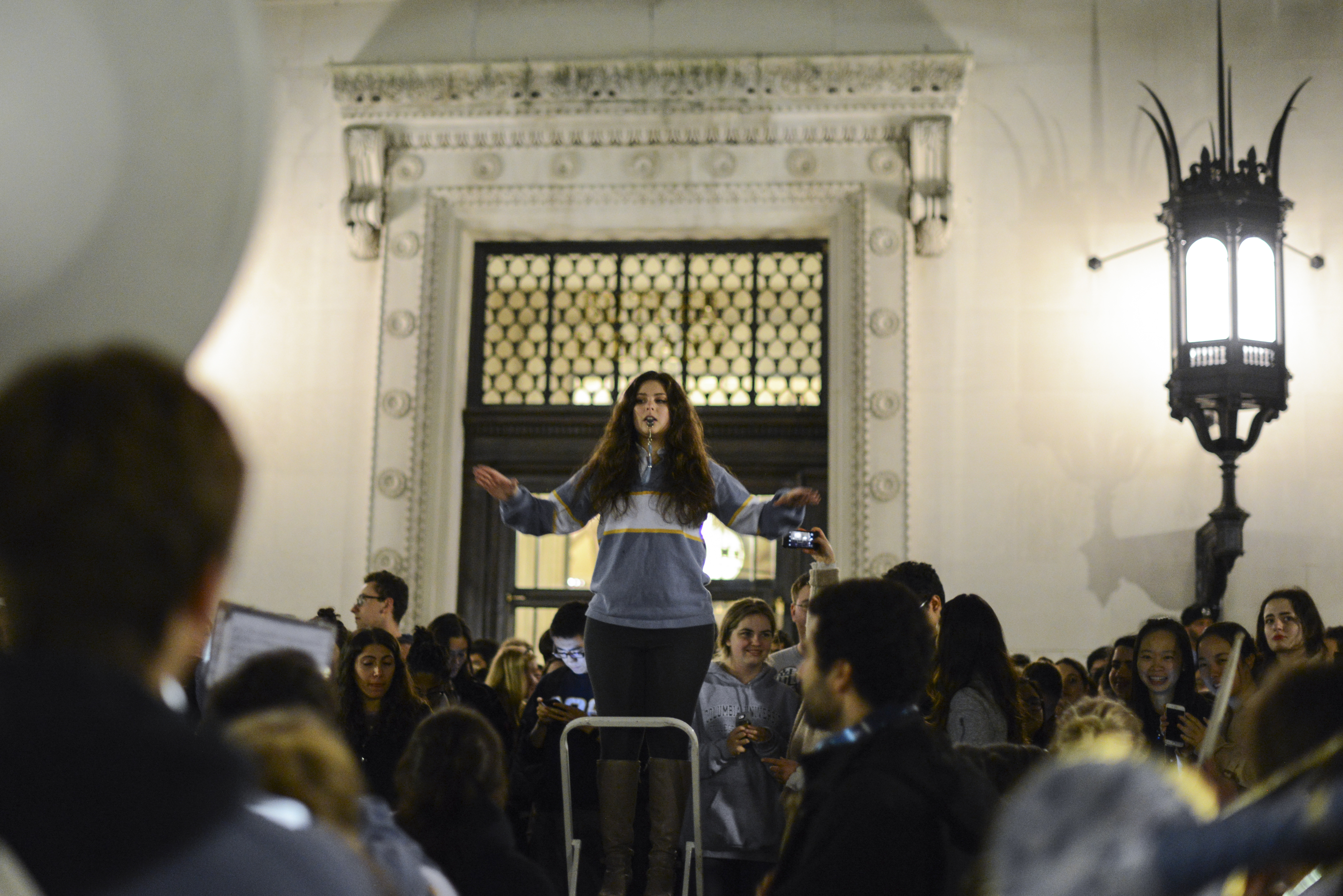 While the Columbia University Marching Band still wasn’t allowed in Butler, Public Safety wasn’t able to stop it from doing its routine outside in the cold. Armed with an upside-down Yale flag and a small black dog, CUMB got into formation and pulled out all the stops.

Spectrum’s here to give you the most memorable jokes from this year’s performance, in case any of your missed our live stream and blog.

The band started with some commentary on JJ’s closing down after the pipe collapsed.

“At first we treated John JJ’s with the same suspicion as a new stepfather, thinking ‘you’re not my real dad’ and ‘no, i don’t want to play catch with you, John.’ But step-JJ’s revealed real JJ’s for the deadbeat dad that it was.”

“John JJ’s had enough room to walk around without having to go to second base with everyone in the pancake line.”

The band then mused on what else would be better if it “accidentally broke.”

“What if Schapiro burned down and was replaced with a bouncy castle?”

“What if Columbia’s administration slipped on a banana peel and was replaced with automated template emails?”

“Or what if the football team drowned in a pile of shit and were temporarily replaced with literally anything else?”

After a song break, commentary moved to more controversial material.

The band talked about how No Red Tape gave AXO backlash for “equating the pain of domestic violence to the pain of platform heels” and for “having the gall to raise money instead of just triggering bright-eyed prospies.”

When talking about the guy who tore down LGBTQ signs in Pupin and replaced them with signs reading, “Remember Sodom and Gomorrah,” they said, “In a science building this is hate crime, in Hamilton this could have just been a helpful study tip for a Lit Hum final.”

They also made some other Bible jokes, but since Victoria is in SEAS and Huber didn’t read his Lit Hum books, all the jokes went over their heads. What we did understand is that “to get A’s you don’t need understanding, all you need is to go to office hours and get on your knees … and pray” because “if Jesus can turn water into wine, you can turn your C- into an A+.”

They then moved on to talking about sexual assault and how “a student is suing Columbia after her two sexual assault cases from 2015 got even less attention than minorities in the Core.”

They said that the fact that the student got put on hold by the sexual violence response hotline could “mean one of two things: Either Columbia outsourced its customer service to United Airlines, or its sexual violence resources are about as genuine as a sorority’s commitment to ‘philanthropy.’”

Finally, in an attempt to get some audience participation, the band asked everyone to say who they thought was in the right: Israel or Palestine.

In the simultaneous answers shouted by the band and audience members alike, both “Israel” and “Palestine” were heard, alongside “Russia” and “Denmark.”

After resolving this perennial campus dispute, the band gave some study tips before announcing the end of Orgo Night, and students filed back into Butler past  numerous Public Safety officers at the entrance and along the hallways of the second floor.

Enthused? Sickened? Bummed the band still didn’t get to perform in 209? Let us know on Facebook, Twitter, and Snapchat @CUSpectrum.