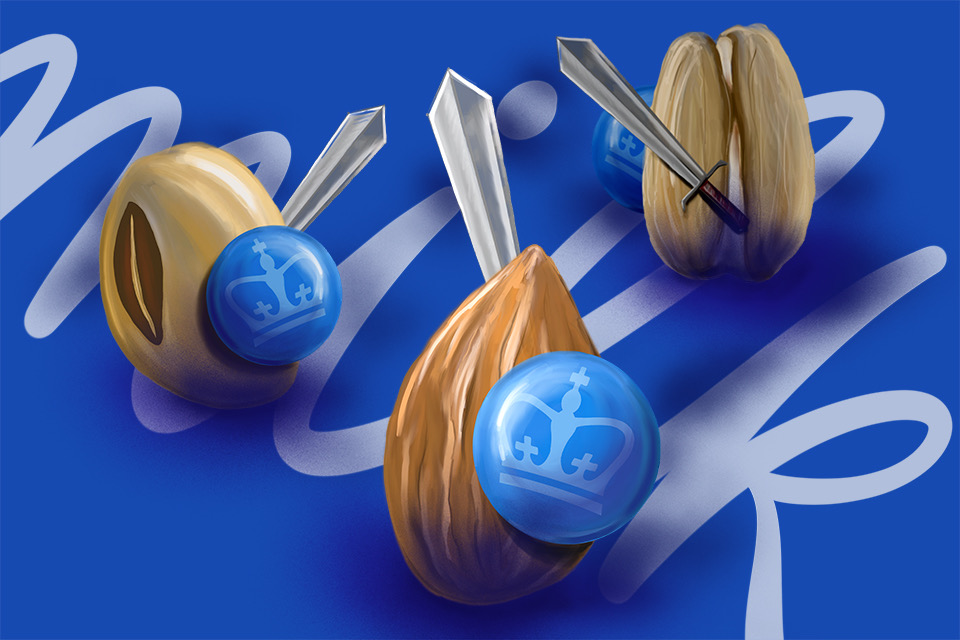 We heard that there was a war over milk on campus, and rather than coming out as explicitly for or against milk-shaming, we here at Spectrum decided to take a hint from Aristotle and follow the middle way. There’s no denying it: While milk is (generally) a healthy and delicious beverage, the dairy industry that produces it is not so easy to stomach. Making one 200-milliliter (about a 6.7-ounce glass) of dairy milk requires over 100 liters of water and 1.5 square meters of land—and produces over 0.5 kilograms of carbon emissions. While you should, by all means, enjoy your beverage of choice in the dining halls, we here at Spectrum have decided to review all of the alternative milk options in Ferris and John Jay—just in case you’re lactose intolerant, vegan, or are considering reducing your dairy intake for environmental or ethical reasons.

Additionally, since it’s the OG, soy milk is probably the alternative milk least likely to get you milk-shamed. We’re serious—Train references “soy lattes” in their perennial hit “Drops of Jupiter,” which came out in 2001. To those who turn their nose up at good ole soy, we challenge you: Has your alternative milk of choice been referenced in pop culture longer than the first-years have been alive?

Solid, but not out of this world. A good consistency with a pretty strong bean-y aftertaste.

With 8 grams of protein, 4.5 grams of fat, and 45 percent of your daily calcium needs, soy milk best approximates the nutritional profile of whole milk and has been rated by nutritionists as the healthiest non-dairy milk.

Soy milk with coffee is passable in a pinch, but definitely is not the best we’ve ever had (sorry, Train). Unless you’re into adding more beans to your beans, we suggest turning to the other cartons in the morning.

The consistency of soy milk is thick enough for cereal. However, we couldn't really get past the aftertaste.

Vanilla soy milk: A twist that misses the mark

For those trying to come off as unique, but not pretentious, vanilla soy milk is the hipster younger sibling of original soy that tries to be as cool as the OG—but unfortunately misses the mark.

Weakly vanilla-flavored and a little thinner in consistency than the original. Bizarre clash of flavors between the vanilla and the soy.

Mirrors the profile of original soy, but has slightly less protein, fat, and calcium.

We actually enjoyed this soy milk a bit more than the original in our coffee—the strong and slightly stale taste of dining hall brew does a good job of masking the soy while letting the vanilla shine through.

Chocolate soy milk is probably the best drink in the dining hall that you’ve never had: Trust us on this one.

Thick, rich, and delicious. The chocolate flavoring does a wonderful job of masking the soy—drinking this is like drinking cold hot chocolate.

Who drinks coffee with chocolate milk?!

We didn’t try this combo, but we should have: Chocolate soy and Cocoa Puffs would probably be a delicious (albeit sugar-laden) power duo!

What besides almond milk goes equally well with a pumpkin spice latte, a fedora, and that Foucault reading you never did? Though almond milk might be the drink of choice for us woke Barnumbians, maybe we should reconsider that: A single cup requires 74 liters of water to produce.

Neither too thin nor too thick, with no single overpowering flavor.

While almond milk punches above its weight for calcium and vitamin D and E content, it’s not as hot in the protein department, with only 1 gram/cup.

Original almond milk’s smooth and rather nondescript flavor blended well with our morning joe. However, Joe (the coffee shop) is the where almond milk truly sings: Order that $7 almond milk vanilla latte and you will also understand.

Original almond milk had the right consistency and flavor to hold up to our Lucky Charms. The leftover cereal milk was the best of the bunch.

If you like almond milk but think that it’s lacking a punch, look no further: This delectable variation on a delicious classic is for you.

This sweet, milky nectar tastes like a lighter, liquid version of melted vanilla ice cream. It has exactly the right amount of vanilla extract to elevate the taste of original almond milk, which was just a little too bland.

The closest substitute to French vanilla creamer that there is! We only wish that Joe also offered vanilla almond milk lattes.

Though vanilla almond milk is decent with cereal, we suggest that you stick with the original: This concoction was just a little too sweet for us.

Much, much thinner in consistency than both original and vanilla almond milk. Can accurately be described as water with a hint of almonds.

If you’re watching your calories and/or sugar consumption, unsweetened almond milk is the dairy-free milk alternative for you.

Works in a pinch, but too thin for a truly satisfactory cup.

Do not attempt! Tastes just like the abomination that is cereal with water.

Original oat milk: Are you sure this didn’t come from a cow?

Planet Oat’s extra-creamy oat milk was a newcomer and instant hit in Ferris this year—though it’s stocked every morning, it’s rare to find past noon. After testing it, we immediately understood the hype: This alternative milk is alternative in name only. It tastes almost exactly like a cold glass of whole milk, fresh from childhood. If you’re lactose intolerant and still miss dairy milk, we’re raising this glass to you.

Smoother than your suavest date. This beverage is so rich and creamy, it’s like, silky.

Velvety and wholesome. I felt like Ego trying Remy’s dish in Ratatouille.

If there’s one thing Columbia Dining does right, it’s alternative milks—between soy milk, almond milk, oat milk, and all their variations, you won’t find a shortage of choices. The sheer breadth of options, however, also makes choosing a winner difficult: Most of the milks had areas where they shone, and other aspects where they fell short. But if we had to choose, the winners in each category are below:

Enough talking—now it’s time to swipe into the dining halls and drink up!

Staff writer Michelle Zhuang can be contacted at michelle.zhuang@columbiaspectator.com.