Which UWriting is “write” for you?

Which UWriting is “write” for you? 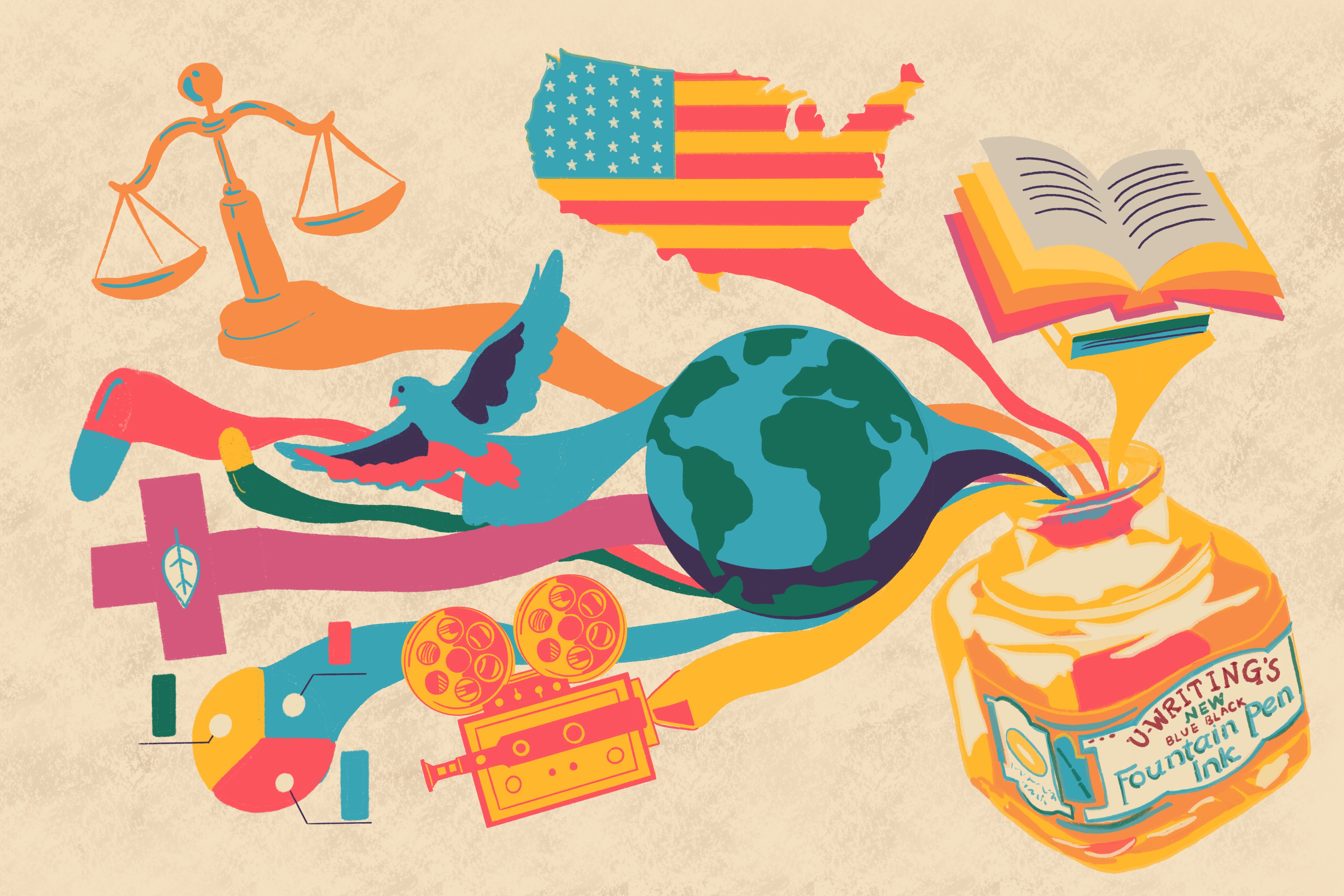 For some, the Core Curriculum is what drew them to Columbia. For others, it is the bane of their existence. No matter which category you fit into, taking University Writing is a given. All first-years in Columbia College and the School of Engineering and Applied Science are required to take it. With second semester coming up, those who haven’t yet taken the course have the chance to choose which section they like best. But with nine different sections of the class, how can you know which one is right for you?

As the only non-themed version of UW, Contemporary Essays places an emphasis on enhancing your literary skills in a variety of different subject areas.

Take if: You like having the freedom to choose your own topics.

Don’t take if: You have a specific interest you want to write about and need more structured prompts.

Example texts: “They Pretend To Be Us While Pretending We Don’t Exist” by Jenny Zhang, “Brainy or Busty? Both. Sexuality and Intelligence in BBC’s Sherlock” by Emily Man, “Fashion’s Latest Trend: Pushing the Boundaries of Beauty with Intersectional Identities” by Emily Lau, “The Decline of the Nation-State and the End of the Rights of Man” by Hannah Arendt, “Education programs in Florida would reduce recidivism, costs to taxpayers” by Tabitha Cohen.

Readings in Law and Justice

This section will focus mainly on interpretations of law through textual analysis. The issues that come up will cover areas of law and justice that impact everyday lives in society.

Take if: You want to ponder over questions of morality in your writing.

Don’t take if: You’re looking for a class which will give clear answers as to how a text should be interpreted.

Example texts: “Free Feminism Tomorrow” by Ryan Miller, “Beyond the Monochromatic: Suffering and Empathy through the Lens of Intersectionality” by Shannon Sun, “Half the land in Oklahoma could be returned to Native Americans. It should be.” by Rebecca Nagle, “Themes of 2016: Progressive parties have to address the people’s anger” by Michael Sandel.

This course is designed to work across multiple different fields of textual analysis, including the historical, political, literary, musical, and theatrical aspects of America. You will come to understand the variety of voices that have come together to form what we know as American society.

Take if: You’re interested in working with interdisciplinary areas of American culture.

Don’t take if: You want a clear voice and message in the work you are studying.

Example texts: “What to the Slave Is the Fourth of July?” by Frederick Douglass, “Letter from Birmingham Jail” by Martin Luther King, Jr., “Good Day Columbus: Silences, Power and Public History (1492-1892)” by Michel-Rolph Trouillot, “Eating the Dead: Consumption and Regeneration in the History of Sugar” by Vincent Brown, “American Extremism Has Always Flowed from the Border” by Greg Grandin.

Readings in Gender and Sexuality

By analyzing the impact of gender and sexuality in a variety of fields, this section aims to help its students become more well-versed in the topic of gender studies.

Take if: You like to read about topics currently being discussed often in society with large amounts of freedom involving what to write about them.

Don’t take if: You don’t want to hear about sensitive issues regarding personal topics such as identity and sex.

Example texts: “The Queer Art of Failure” by Jack Halberstam, “Skirt Chasers: Why the Media Depicts the Trans Revolution in Lipstick and Heels” by Julia Serano, “Bad Feminist: Essays” by Roxane Gay, “The best $6,250 I ever spent: top surgery” by Daniel Ortberg, “Women deserve orgasm equality” by Jessica Valenti.

Readings in Film and Performing Arts

In this course, you will be analyzing work across a particular medium of artistic expression such as film, theater, or music. Through discussing your reactions to pieces from different artists with classmates, you will gain new perspectives about the work and art in general.

Take if: You want to learn more about artistic culture both inside and outside of the classroom, with field trips in the city.

Don’t take if: You’d like to study written works.

Example texts: “The Theater and the Plague” by Antonin Artaud, “There Must Be a Lot of Fish in That Lake: Toward an Ecological Theater” by Una Chaudhuri, “Ethics, Evolution, Ecology, and Performance” by Bruce McConachie, “Geek Mythology: Nostalgia in Four Colors” by Ryan Hampton, “Can the Pen Match the Sword?: A Look at the Value of Words in the Depiction of War” by Julia Halperin

This section of UW features texts regarding hot topics in human rights, not only within the confines of our country’s borders but throughout the rest of the world as well. It will also provide context for a historical and global struggle for rights to be defined.

Don’t take if: You want to focus on more lighthearted material in your UW class.

Example texts: “Humiliation: Finding the Silver Lining” by Kyelee Fitts, “The Difficulty of Imagining Other Persons” by Elaine Scarry, “Who Gets to Be Human on the Evening News?” by Alisa Solomon, “Studying While Black” by Zack Etheart, “Overlooking the Rite in the Name of What’s “Right”: The West and Its Perceptions of Female Genital Cutting” by Catherine L. Crooke

Readings in Data and Society

This course outlines the need for an intersection between technical and literary language. You will be identifying and discussing the ethical implications of technology such as social media and biological data on our society.

Take if: You want to go into a field combining complex and colloquial language.

Don’t take if: You are not interested in data-based literary work.

Example texts: “Save the Robots: Cyber Profiling and Your So-Called Life” by Richard T. Ford, “Indirect Light” by Paul Virilio, “Panopticism” by Michel Foucault, “Computing the Human” by N. Katherine Hayles, “The Seductive Power of Science” by Jennifer Terry

Though it centers on medical topics, this course views issues of biological ethics through many perspectives, so to take it you do not necessarily have to be a student interested in pursuing medicine. The course will look at complicated questions arising from historical, political, and hypothetical situations.

Take if: You want to discuss controversial topics surrounding the medical aspects of society.

Don’t take if: You don’t want to touch any scientific texts whatsoever.

Example texts: “The Pain Scale” by Eula Biss, “The Cancer Journals” by Audre Lorde, “Born a Womyn?: Lisa Vogel’s Paradigm for Transgender Exclusion” by Nadia Khayrallah, “Beyond ‘That’s Not Funny’: Reading Into How We Read a Prison Rape Joke” by Nadia Khayrallah, “How the Senate’s Health-Care Bill Threatens the Nation’s Health” by Atul Gawande.

Open only to international students, this section will allow those from outside the United States to learn more about American writing culture in the context of their own and other students’ experiences.

Take if: You are an international student looking for a glimpse into American culture through text.

Don’t take if: You are not an international student.

Registration can be a point of stress for many students, but it’s important to remember that you have a foundation of support. Meet with your advisor, complain to your friends, and ask a trusted upperclassman for advice! And to all those first-years out there in Frontiers of Science or The Art of Engineering, good luck next semester.