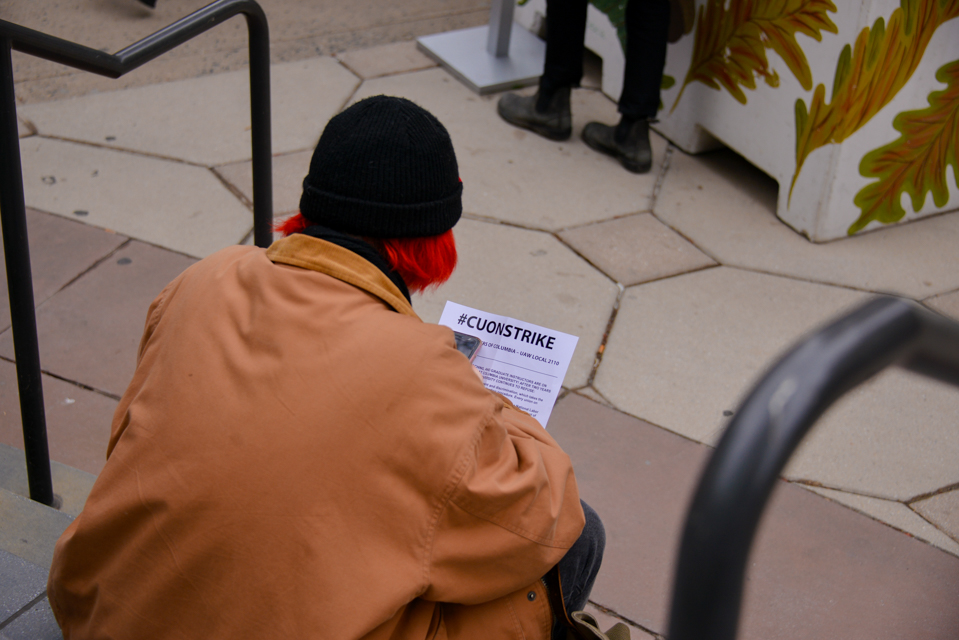 Following over two years of unsuccessful bargaining and picketing attempts, Columbia research and teaching assistants are once again going on strike to demand a fair contract and recognition as employees. The Graduate Workers of Columbia-United Auto Workers (GWC-UAW) union hopes that this strike will compel Columbia to “bargain in good faith” and to properly respond to workers’ demands by accepting the employment rights contract the GWC-UAW drafted in 2018. The decision to strike is the result of a GWC-UAW vote last spring that saw 96 percent—1833-77—voting to authorize the bargaining committee to call a strike if necessary. Student-workers are continuing their active fight for “living wages, comprehensive healthcare, recourse for harassment and discrimination, and union protections and shop for all.”

In their most recent letter to the administration, members of GWC-UAW emphasized that their core issues include their inadequate current salaries, which they argue are $10,000 below a workable living wage in New York City, inadequate medical coverage, student-workers’ susceptibility to power-based and sexual harassment, and the University’s refusal to recognize all workers as part of the union and grant a union shop clause to the student-workers, which would guarantee workplace protections, rights, and benefits for student-workers. They stress the importance of recognizing graduate students as employees, evidenced by a growing reliance on graduate students to teach Literature Humanities and Contemporary Civilization classes—only 28 percent of all classes in the 2015-2016 academic year were taught by tenure-track faculty.

Graduate students have been frustrated at various elements of the administration’s COVID-19 response, including its removal of teaching appointments for graduate students and its failure to provide rent relief and a sufficient stipend for the summer months. Head to the union’s website for a complete list of its bargaining goals, and read our recent article on its mission to advocate for child care benefits here.

What’s the history behind this strike?

Before August 2016, student-workers at Columbia were not allowed to unionize and exercise collective bargaining for a fair contract due to the 2004 Brown University ruling by the National Labor Relations Board (NLRB). It ruled that graduate teaching assistants, research assistants, and proctors at private universities are students and do not have bargaining power, a right that student-workers at more than 60 public universities across the United States exercise.

Starting in late 2014, teaching and research assistants at Columbia campaigned to unionize, joining the wave of graduate student-workers across the nation hoping to do the same at institutions including Stanford University, the Massachusetts Institute of Technology, Harvard University, and more. They petitioned the NLRB in 2015 to overturn the 2004 Brown ruling, and despite an initial dismissal, their case was reviewed in 2016 and resulted in a historic decision that overturned the 2004 ruling.

The Columbia administration resisted the formation of the union by filing objections and refusing to come to the bargaining table with GWC-UAW. Columbia’s refusal to bargain meant that union members could now exercise their right to strike, and starting April 24, 2018, over 1,500 teaching and research assistants participated in a week-long strike, attempting to convince the administration to start bargaining with its student-workers.

The 2018 strike saw a strong display of solidarity not only from Columbia students but also from other unions and institutions, including workers from New York University, Yale University, Princeton University, and Fordham University. They also received support from several New York City Council members, Cynthia Nixon, and the president of Ireland.

While the University committed to “abiding by the National Labor Relations Board definition of who is in the union” after the strike and to beginning the bargaining process in February of 2019, it has withdrawn proposals on protections from discrimination and harassment, eliminated the enhanced health plan, and continued to implement policy without consulting the union. Since then, Columbia student-workers have held strikes in 2019 and 2020, seeking to improve their employment conditions and find solutions to the union’s initial bargaining goals.

How are student-workers striking?

Since Monday, teaching assistants who are partaking in the strike have not been involved with their teaching responsibilities. There have been both digital and virtual picketing efforts. The in-person picket lines have been taking place on the Morningside campus on College Walk and at the Columbia University Irving Medical Center. In the coming days, in addition to these two locations, there will also be picketing activity at the Jerome L. Greene Science Center. See the full schedule on the in-person picket sign-up form here and the virtual picket form here.

What does this mean for undergraduate students?

Students with TAs who are partaking in the strike will likely not see or hear from their TAs for the duration of the strike. This includes grading, responding to questions, and holding office hours. Some professors and TAs have reached out to students to talk about the strike. The Columbia Writing Center will be canceling all appointments for the duration of the strike and will be transitioning to a drop-in system. They will also be canceling workshops and Writing Productivity Sessions.

What has the administration’s response been?

In an email sent on March 12, Dean of Columbia College James Valentini and Dean of General Studies Lisa Rosen-Metsch encouraged undergraduate students to continue attending class and fulfilling their responsibilities as students. Interim Provost Ira Katznelson, in an email on March 15, asserted that the present demand of a 5 percent and no less than 4 percent salary increase at the start of contracts and in subsequent years is “not tenable, and no strike … can change that reality.” He also wrote that the University has proposed new changes to the Equal Opportunity and Affirmative Action and Title IX processes, referring to the GWC-UAW’s rejection of this initiative on the ground that “no one at the university can be neutral” as “something of an affront.”

The GWC-UAW has written a response to this email to clarify what it calls misinformation from the provost. GWC-UAW has thus far had two bargaining sessions with the University this year, with another one scheduled for Wednesday. The union describes that the sessions “did not provide anything in the way of significant updates.”

What has the response from the undergraduate community been?

Student groups like Student-Worker Solidarity and Columbia Young Democratic Socialists of America have expressed solidarity. A GoFundMe by SWS has raised more than $89,000 as of March 17.

Head to our articles from News and the Eye if you would like to read what GWC-UAW members have to say. See photos from the picket line in our photo essay, and read an op-ed by Ph.D. student Noah Rauschkolb, who is currently striking.

Deputy Editor Jane Mok can be contacted at jane.mok@columbiaspectator.com.