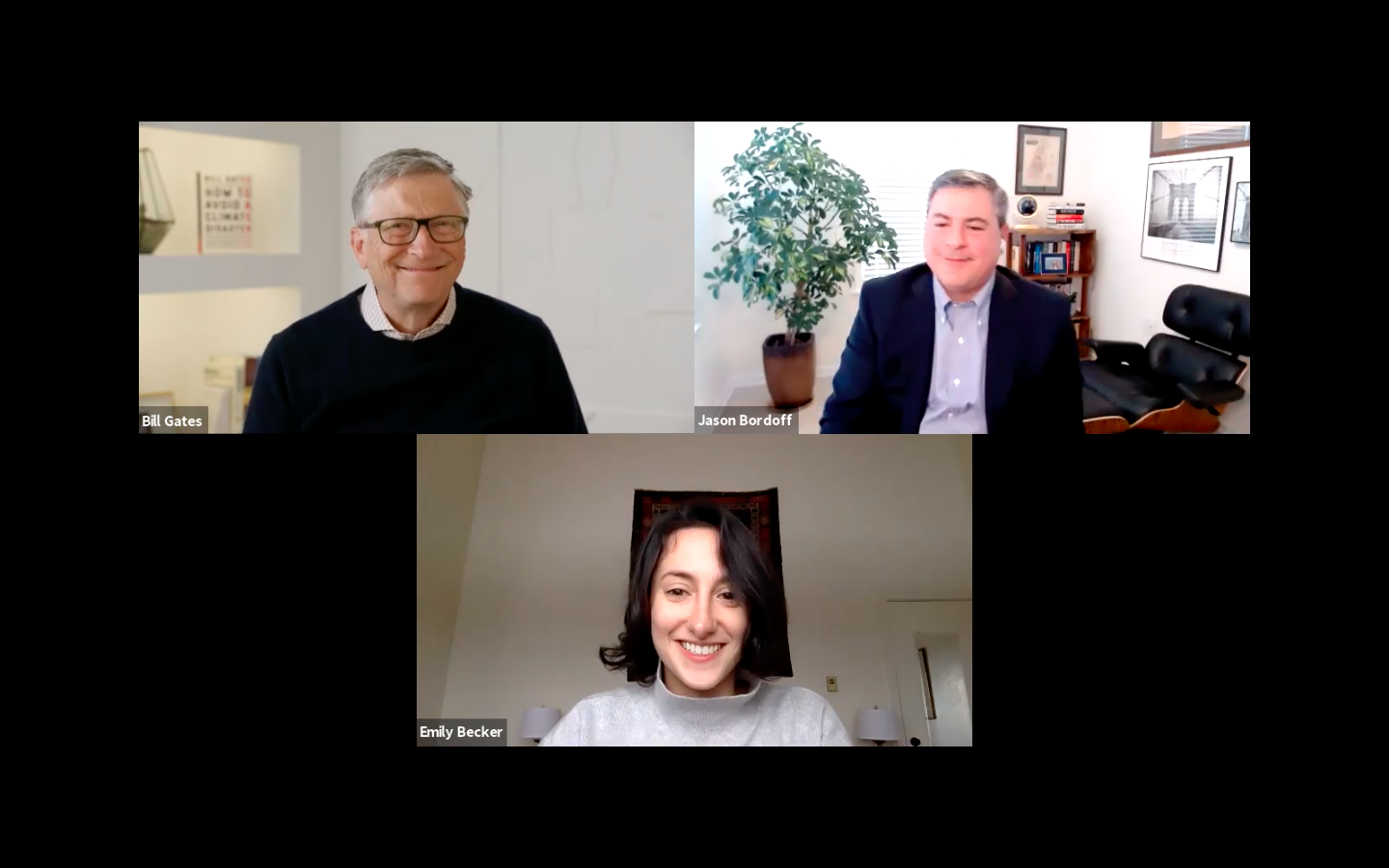 With the world keenly focused on tackling the COVID-19 pandemic, it’s easy to forget other pressing issues at hand that need to be addressed. A Zoom webinar held by the Center on Global Energy Policy at the School of International and Public Affairs with Bill Gates on Feb. 23 brings our attention back to the climate crisis that is still ever-present.

Moderated by Jason Bordoff, founding director of the Center on Global Energy Policy, the webinar has Gates discussing his new book “How to Avoid a Climate Disaster,” which outlines strategies to efficiently tackle global warming and reduce carbon dioxide emissions.

Over the introductory video that started the meeting, Gates narrated: “In a typical year, the world emits over 51 billion tons of greenhouse gasses. And as we keep doing that, the consequences for human life will be catastrophic.”

The key ideas in question revolve around the overarching goal of completely eliminating the world’s yearly carbon dioxide emissions by 2050. Central to this goal is the idea of “net-zero” emissions, or the point at which we’re no longer releasing any carbon dioxide into the atmosphere. “As long as you’re driving more carbon dioxide in—therefore temperature up, therefore more of these bad things, particularly for the poorest in the world—it’s really disastrous,” Gates explained.

Such a daunting challenge invites another one of Gates’ key ideas: the “green premium,” or the cost of achieving net-zero emissions. In his words: “We can compare the green approach … with no emissions to the current approach and compare those prices, and the [price] increase to be green is what I call the green premium.”

Gates was sure to emphasize just how unprecedented our efforts would have to be to truly prevent catastrophe. “Avoiding a climate disaster will be one of the greatest challenges humans have ever taken on,” he asserted in his opening video. It’s not the first such warning he’s made—Gates referenced his TED Talk from 2015 that advised about the dangers of a pandemic for which the world was not prepared. Even in comparison to what we have experienced as a result of the actual coronavirus pandemic, Gates cautioned that the threat of climate change and its consequences are “bigger, harder, more pervasive” than those of a global pandemic.

Gates’ hesitations about the achievability of his goals arose in other areas as well. While impressed by the enthusiasm of young people, Gates admitted that reducing greenhouse gas emissions and increasing genuine concern for the future of the planet will be a massive undertaking for our generation. He also pointed out that in his view, younger people “don’t really have a plan” and will need to “accelerate innovation,” or else the objective of truly avoiding a climate disaster “won’t get done.”

Such a plan necessitates policy—another area that Gates said needs strengthening—as the policies we have in place right now are “not directly aimed at greenhouse gas reductions.” Gates suggested that the solution lies in increasing research and development budgets, improving education about climate change, and bettering the designs of innovations that already exist, among many other things.

After hearing such a grim assessment of the reality of climate change, most of the students in the audience probably felt daunted. Not unexpectedly, then, one student asked Gates what we should be doing as individuals to avoid a climate disaster. Gates gave an answer in four parts: educating yourself and sharing that information; participating in politics—since “policy matters”; acting as a green consumer and favoring products with a “lower emissions impact”; and, as an employee, putting pressure on companies to contribute to the goal of net-zero emissions by 2050.

Gates also pointed out other strategies to achieve the goals written in his book. He cited adaptation—that is, methods to help poorer communities adjust as we work to reduce carbon dioxide emissions—as an area that was promising and prime for innovation. Other examples included work in offshore wind in the U.K., solar energy and electric busses in China, and climate policies that also address vast inequality in wealth, not to mention the founding of the Columbia Climate School. Gates also highlighted the United States’ ability to tax the wealthy more stringently and opportunities to subsidize green premiums, among other things, as other tactics we can use to reach net-zero emissions by 2050.

2050 is close, and Bill Gates made it clear that the work that needs to be completed before then is demanding, unprecedented, and urgent. Yet the discussion ended on a list of things we can do and the steps we can take to get there.

Gates made it clear that though our current situation isn’t “hunky-dory,” he firmly believes that the goals outlined in his book are ones that are possible to implement with a lot of work from younger generations.

If you would like to watch the official recording of the webinar, you can find it here.