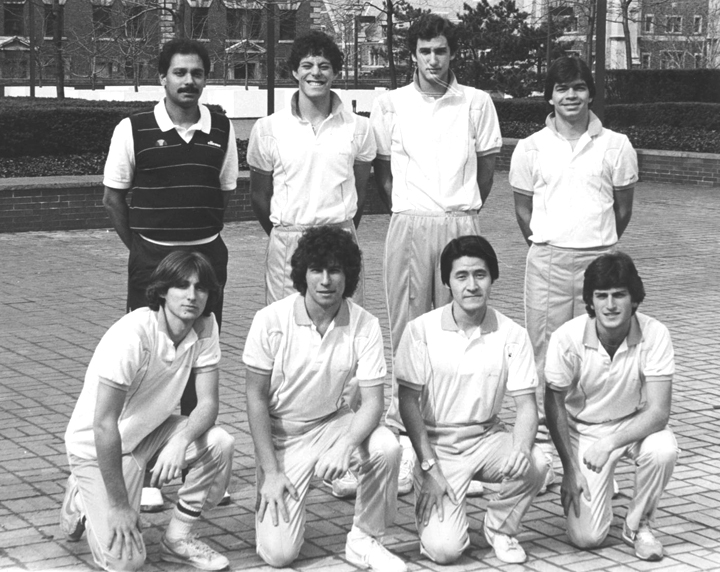 Goswami revitalized the mens tennis program in his second year, leading them to a 17-0 season in 1984.

Yet despite his personal achievements and the winning culture he has built at Columbia, Goswami is humble and disarming.

On first meeting, his lighthearted jokes, big smile, and modesty seem out of place for someone who has accomplished so much. But those who know Goswami, like associate head coach Howard Endelman, CC '87, recognize that his easygoing personality is in many ways the reason for his success.

Endelman was part of Goswami's first recruiting class in 1983, and he still remembers his four years playing under the head coach as "the right amount of intensity combined with fun."

For Goswami, fun and tennis have gone hand in hand since he began playing in his native home of Assam, India.

Because his father had connections with a manager of the British tea gardens where he lived, Goswami and his family were able to play tennis in the tea gardens on what Goswami recalls were the most beautifully manicured tennis courts he has ever seen.

"We used to go in a lot, and we got pretty good," Goswami said. "The managers and their kids, they loved us. So that's how we got involved in tennis."

Goswami went on to play tennis at St. Xavier's College in Calcutta, India, and then began touring as a professional player. He had a few moments of notable success—earning a spot on the 1974-1975 Indian Davis Cup squad and then winning his home country's national titles in 1978 and 1979—but Goswami never achieved a world ranking better than No. 308.
Goswami was having trouble making a living as a player, and then suffered a shoulder injury that inhibited his serving while playing in tournaments in the U.S.

That injury ended up revealing a new opportunity to Goswami. While hurt, he stayed with a friend who was an instructor at the Westchester Country Club. Though Goswami could not serve, he could certainly teach.

"I started giving a few lessons, I made some money, one thing led to another, and they offered me a job in the country club," Goswami said.

During summers, Goswami would work at the country club, and during the year, he would leave to play tournaments. But when the head coaching position for Columbia's team opened up in 1982, he saw a new opportunity.

Goswami was friends with former coach Butch Seewagon and Dick Savitt, whose name was bestowed on Columbia's new tennis center. Both men encouraged Goswami to take the job, a position that he admits he was unqualified for at the time.

"The story goes—and I didn't know—that it was rigged," Goswami said. "I didn't have any coaching experience, I never played college tennis in this country, so how the heck did I get this job? It's good luck, I guess. It's not my looks, even though I had a lot more hair back then."

Despite his lack of experience, Goswami was quick to make his mark on Light Blue athletics.

Goswami's first season brought mediocre results, as the Lions finished in sixth place in the league with an 8-7 record. But when Goswami brought in his first recruiting class the next year, Columbia's fortunes took a turn for the better.

In the spring of 1984, with three freshmen in the singles lineup—one of whom was Endelman—the Lions went 17-0 to win the Eastern Intercollegiate Tennis Association and earn a bid to the NCAA tournament.

It was the first time the Lions had gone undefeated in 81 years, and Columbia's first league tennis title since 1973.

"From last in the Ivies to first in the Ivies the next year—I became an instant genius," Goswami said. "So I guess I've been blessed—lucky and blessed is the right word."

The Lions lost in the first round of the national tournament, but that year signaled the beginning of an era of success for Light Blue tennis that has continued for 30 years.

"I wish I could say that there was something that I found really tough, but I didn't," Goswami said. "Everything kind of fell into place. You have to be lucky a little bit."

"He leaves a lot up to us, in the sense that he knows when to push us but he also knows when to lay off," senior Rajeev Deb-Sen said. "It helps us mature because we have to know ourselves and we have to take the initiative to practice and work hard."

While developing title-contending players, Goswami manages to make training an enjoyable experience for the members of his team as well.

"He knows how to keep it fun," senior Haig Schneiderman said. "I always look forward to going to practice. He's good at taking things seriously without taking them too seriously."

Schneiderman, the Lions' No. 1 singles player who is ranked No. 64 in the nation, is one of the many all-Ivy competitors that Goswami has cultivated.

Goswami credits much of Columbia's success during his tenure to the talented players like Schneiderman whom he has coached. But Endelman said Goswami's coaching has had a large role in developing those players' abilities.

"This job is less than 50 percent about tennis and much more about trying to get many different types of individuals with different goals and different aspirations to reach their potential as people, tennis being a part of that," Endelman said. "And I think he's the master of that."

Both Schneiderman and Deb-Sen were part of the Lions' championship teams in 2009 and 2010, and with the Light Blue riding a nine-game win streak headed into conference play, both seniors are confident Goswami may win his ninth league title this spring.

Goswami, the 2007 ITA Regional Coach of the Year, described his passion for both the sport and the Light Blue as unwavering, and he hopes this mentality will continue to make him an effective leader for his players.

"That's, I think, the most important part—that it's not getting stale," he said.