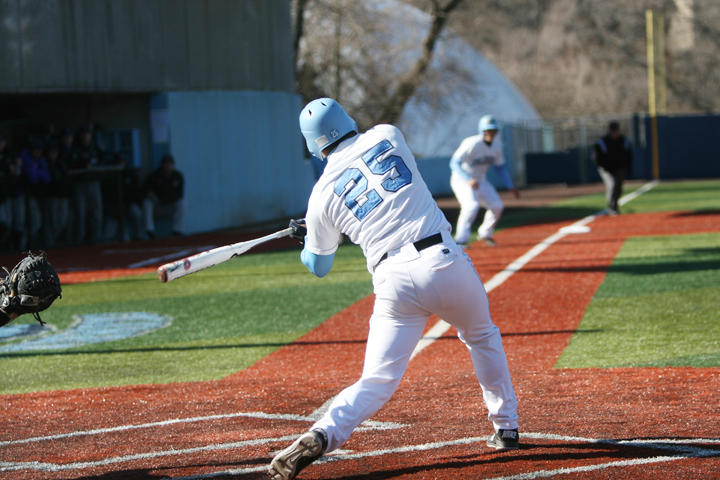 Dario Pizzano was selected No 461 in the 15th round of the MLB draft.

Pulaski, Va., and Orem, Utah may not be New York City, but it is hard to imagine there is any place left fielder Dario Pizzano or pitcher Pat Lowery would rather spend their summers.

Less than one week after Pizzano was selected No. 461 overall in the 15th round of the MLB draft by the Seattle Mariners and Lowery was taken in the 21st round as the No. 657 overall pick by the Los Angeles Angels of Anaheim, each former Lion has signed on with his new team.

This marks the first time a Columbia player has been selected in the MLB draft since 2004, when Fernando Perez and Jesse Grant were selected. Pizzano and Lowery are the 15th and 16th players to be drafted in program history. Pizzano will be assigned to play for the Pulaski Mariners, an advanced rookie league team in the Appalachian League, and Lowery will be assigned to the Orem Owlz, an advanced rookie league team in the Pioneer League. Both teams begin their seasons this week. Neither player can forget the experience of getting drafted.

"It was pretty crazy," Pizzano said. "The anticipation was ridiculous: I was stressed, anxious, excited. When I finally heard my name called, it was a rush, it was awesome. It still hasn't really hit me yet that I'm a professional baseball player. It's been my dream for my whole life, so it's unbelievable."

While Pizzano was drafted in the final round on June 5, Lowery received indication from the Angels around the 10th round that day that he might soon be drafted. He was not drafted by day's end, so the following day, instead of watching the draft on the computer, he went with a "different strategy."

"I was actually out at lunch with my family when I got the first couple texts that said congratulations," he said. "It was a pretty surreal feeling." Head coach Brett Boretti was not surprised by the selections. "We were expecting both of them to get drafted," he said. "We knew the Mariners had a lot of serious interest, and with the different draft rules this year, we weren't sure how that was going to affect Dario, being a junior."

Indeed, there was indication before the draft that Pizzano may have been taken earlier on—though he was the fifth Ivy player to be drafted.

"They said even top-10 rounds, but I had been told by plenty of people that the draft's a crazy thing and it doesn't always work out exactly how people tell you," Pizzano said.

Boretti believes that has to do with the recent draft changes made by MLB. These changes penalize teams for exceeding certain limits, or "slot amounts," on the amount of money they spend in signing bonuses, making it more difficult for teams to entice underclassmen to leave school.

Pizzano was a first-team All-Ivy outfielder in each of his three seasons for the Lions. After being named the Ivy League Co-Rookie of the Year in 2010, he never looked back. He was named Ivy League Player of the Year in his junior season, his final as a Lion, hitting .360 (including .409 in Ivy play) with four home runs and 16 doubles, drawing a staggering 31 walks, and striking out just 16 times. His success made quite the impression on the Mariners and their scout Brian Nichols.

"They were the team that was most interested in me since last year," Pizzano said. "They came to my house and they were talking to me constantly throughout the season. They attended lots of games at Columbia, videotaping me. I had a good feeling, familiarity with their scouts and organization."

Pizzano noted that he gained a lot of recognition while playing for the North Shore Navigators in the New England Collegiate Baseball League last summer, when Nichols first took an interest in him and invited him to a special workout for the Mariners for northeast prospects.

"Dario is a player that our Northeast area scout Brian Nichols pushed hard for," Mariners Director of Amateur Scouting Tom McNamara said in an email. "We really liked his hitting ability and his strong physique. He has an extra base swing and showed that in college."

Boretti believes Pizzano was sought after as a "very selective hitter with a good eye: When the ball's in the zone, he hits it well." Pizzano admits that he did pressure himself in front of the scouts at the start of last season. "When we came back from our California trip, I was hitting .270 on the year," he said. "I was thinking so much about every at bat, trying to do so much, and taking myself out of my game. It was tough at first, but I got used to it and once I settled down, the hits started coming."

Meanwhile, his senior teammate was more consistent than ever as the ace of the pitching staff. Lowery was a two-time first-team All-Ivy starting pitcher and the 2010 Ivy League Pitcher of the Year, when, as a sophomore, he helped lead his team to the Ivy League Championship Series. For his final three years, he was the ace of the Lions' staff, and finished his Columbia career with a 3.56 ERA and 147 strikeouts, ninth most in program history. Lowery led the league with a 2.35 ERA in his senior season.

"I didn't know what to expect," Lowery said of the draft. "I talked to the Angels a few times before the draft, but not for about a week leading up to the draft."

He helped raise his profile by pitching for the Brewster Whitecaps in the Cape Cod League last summer.

"From our series down at the Citadel there were a good number of guys there to see Pat, many of whom knew about him from the last couple of years but especially last summer at the Cape Cod League, he got the exposure there," Boretti said. "He was pitching 90 to 92 last summer and obviously that's going to bring some interest, and I think he was consistent throughout the year. That was the biggest thing: He maintained his velocity from last summer and he showed better secondary stuff and better command than he did last summer, which is a credit to his working on it over the past year."

Just as it had been for Lowery, the summer league proved essential to Pizzano. "There was great talent, kids from all over the country in that league, and wood bats," Pizzano said of the NECBL. "That's what you're going to be playing with at the next level, and I hit for a higher average in that league than for my last two years at Columbia. That was huge, that was the first step."

But the decision for Pizzano to conclude his Light Blue baseball career after three seasons was not easy. "It was one of the hardest decisions of my life," he said. "I wanted to be a pro baseball player my whole life, and people say you might only get one shot, so take it. But I love everything about school, everything about being a college baseball player. That whole lifestyle is awesome, I fell in love with it. I love my team. We had great team chemistry, all those kids are my best friends. I loved playing under Coach Boretti. I'm going to miss every part of that."

The decision was only made more difficult after back-to-back disappointing seasons, in which the talented Lions fell short of the Gehrig Division title.

"It was a little disappointing but we made a good run," he said. "This season we felt we were the best team. We know we work harder than anyone else in the Ivy League. We were ready. We had one bad weekend [at Cornell]."

While Pizzano indicated that he had a good idea 2012 could be his final season, the prospect didn't affect his approach throughout the year. And a Light Blue diploma isn't out of the picture—according to Pizzano, the Mariners will pay for the final two semesters of his Columbia education as part of his signing bonus, and he may very well finish off his degree over the next two fall semesters. Looking back, Piazzano believes coming to Columbia was the right choice.

In just three seasons, Pizzano left quite a mark on the Columbia record book. He ranks eighth all-time at Columbia with a .364 batting average, second with a .647 slugging percentage, seventh with a .448 on-base percentage, fourth with 43 doubles, and sixth with 108 RBIs. Most notably, he has tied with Gene Larkin for first place in home runs, having earned 25.

"It's great to have that record with a World Series champion, Gene Larkin," he said. "To be mentioned in the same breath as him for something to do with baseball, that's an honor."

It's possible that Pizzano and Lowery may one day claim a World Series ring, but first, they must focus on working through the minor leagues.

"I think both of them are mentally prepared for it," Boretti said. "I think it's more mental than physical. I think they both have the physical abilities. That's obvious, because they wouldn't have gotten the shot that they're getting right now."

While Lowery will play his home games in Utah this summer, his road games will take him to Idaho, Colorado, and Montana. Pizzano won't be playing in traditional "baseball country" either, as his games are scattered across Virginia, West Virginia, North Carolina, and Tennessee.

"I'm just grateful for the opportunity. Hopefully I can make the best of it and continue to move forward and continue to achieve everything that I ever wanted to," Pizzano said. "People have been telling me [Pulaski] is kind of one of those little midwestern ghost towns. And that's OK—I'm there to play baseball. So it will be a new, exciting experience. It's not like Boston where I live or New York City where I go to school. But it will be fun."

"Everyone told me it's going to be a grind, it's not the glamorous professional lifestyle that everyone knows about," he added. "I love baseball, but when it becomes your job, you have to really love the sport to get through it because it's a grind. But I'm ready to do it."

There is a strong possibility that, during that grind in the coming years, the two American League West draftees will face each other in the minor leagues, if not eventually the big leagues. "That'd be awesome if we did," Lowery said. "After facing him so many times in practice, I don't know who'd get the edge." Pizzano agrees.

"We've faced off against each other in fall ball a couple of years," he said. "But, hey, we're both going to be developing in the minor league system, so maybe he'll come up with a new pitch or I'll be a little better, but I feel like I have the advantage because I've seen him in inter-squad all that time. But he knows all my strengths and weaknesses too, so it would be a good battle."

Before they may face each other, they both can bond over what they share this week: legacies as two of the greatest players in Columbia's history and an open road ahead as they each begin their professional baseball careers, even over 2,000 miles apart.