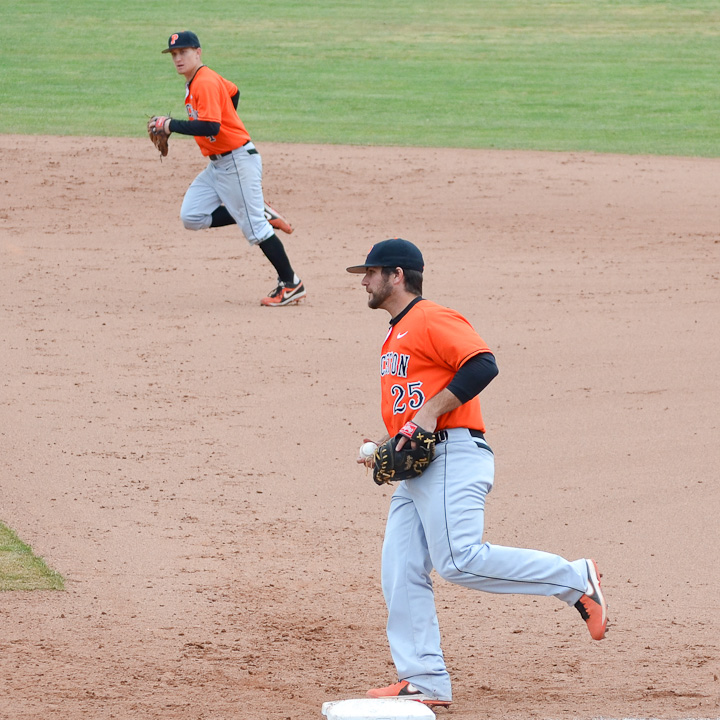 Courtesy of the Daily Princetonian

Pitcher Mike Ford was the playmaker for Princeton this weekend, hitting a homer and crippling the Harvard offense with a complete game.

Every team but Columbia in the Lou Gehrig Division split its conference twin bills this weekend. Columbia, meanwhile, went 4-0.

The Bears had a field day against Penn, as J.J. Franco smashed two home runs in the third and fifth to get the bats going. Brown starter Anthony Galan fended off the weak Quaker offense, pitching a complete game shutout with seven strikeouts.

The Bears faltered in the second game, as starter Heath Mayo took a seat in the dugout after walking three, hitting one, and allowing a single to let the Quakers go up 2-0. Soon after, Penn's Ryan Mincher tripled into center field, coming home on a Connor Betbeze single. The Quakers went on to score three unanswered runs to secure the victory.

All bats were quiet in a game that just barely tipped in Cornell's favor. After Mike Martin scored the Crimson's lone run in the bottom of the third, lefty pitcher Nick Busto tied up the Crimson offense, preventing any runners from advancing past second base. Big Red left fielder Conor McCabe solidified Cornell's lead with a double to left field for two RBIs in the fourth inning.

After taking an early lead, Harvard slipped up in the middle innings, temporarily losing the lead. The Crimson then rallied from the largest deficit it has faced this season, scoring seven unanswered runs in the seventh inning.

A series of Princeton doubles broke a 1-1 tie in the third inning to establish the Tiger's 3-1 lead. Three more insurance runs and righty Zak Hermans' strong starting pitching led to six dry innings for Dartmouth, with the Big Green scoring only a single run.

The tables turned in the second game as the Big Green threw off the Tigers' defense, forcing five errors. Princeton soon dug itself into an inescapable hole, scoring just one run en route to a 6-1 loss.

Pitcher Mike Ford came up big for the Tigers both on the mound and at the plate, hitting a homer and pitching a seven-inning complete game, crippling any chance of a Harvard comeback in the decisive Princeton victory.

A different Harvard offense took the field for the second game, as the Crimson started swinging like it was batting practice. Innings four through six were particularly strong, with Harvard putting up 14 runs to take a 17-10 lead. The Crimson pulled off the win due in part to some wild pitching from Tigers' Nick Donatielloin the bottom of the ninth.

Despite allowing only two runs in the series, the Quakers had to settle for their second split twin bill of the weekend. Both teams struggled to get runners around the bases, but Penn got its the bats going in the fifth and sixth innings, taking the lead 5-1.

A pitchers' duel looked like it would head into extra innings as the ninth drew near and the board still read 0-0. But the Big Green managed to load the bases and Trent Goodrich drew a walk from Cornell lefty reliever Michael Byrne to break the deadlock.

The second game, too, was a shutout. Though Cornell scored right off the bat in the first, the game started to look like another pitchers' duel. Tacking on an insurance run in the sixth, the Big Red sealed the deal at 3-0.

Around The League Baseball Ivies