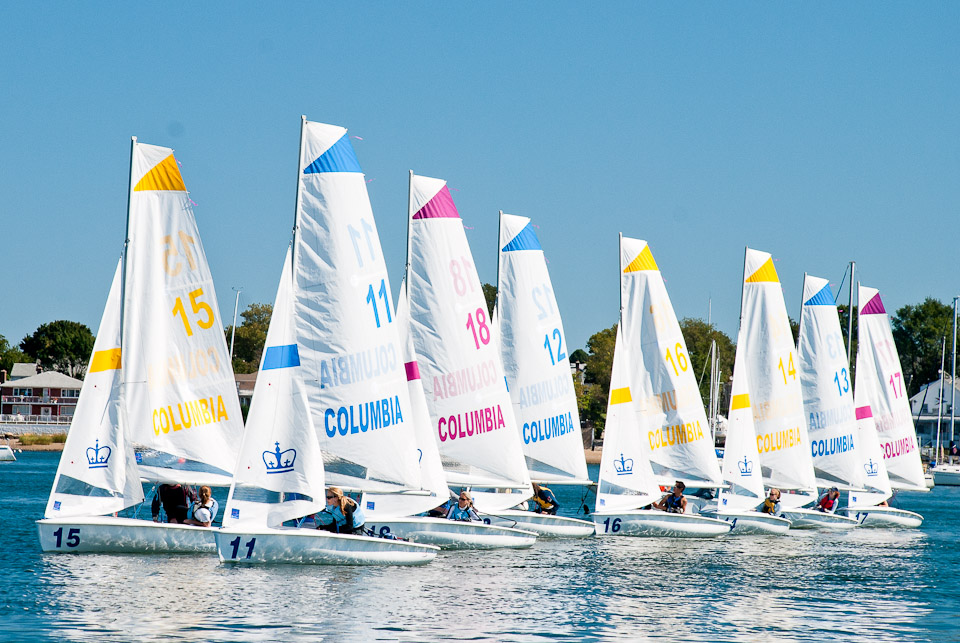 Columbia sailing is successful in no small part due to its board of officers' organization and coordination.

On a cold February day, a group of Columbia students traded their down coats for protective dry suits and gathered just off the water near City Island. Although the winter weather was brutal, they all committed to braving the frigid conditions.

That day marked the first of many five-hour practices to come for the Columbia Sailing Club, which has an incredibly time-consuming spring season for a club sport. Not only does the team practice four days a week, but it also travels up and down the East Coast on weekends to compete in regattas.

But the sailors cherish those cold, dark February days. Team co-captain Katie Duggan, BC '15, said she loves that sailing allows her to escape Columbia's stressful environment.

"I honestly don't know if I could handle attending Columbia University without sailing," Duggan said. "Sometimes I feel like I'm in summer camp—you know, middle of a school week, and I go out and sail for three hours and just have a beautiful picture of the Manhattan skyline."

Although the sailors bear their school's name on their gear, the team is not recognized formally by Columbia. Columbia's club sports regulations bar the club from being referred to as a team or as the "Lions." It also cannot use any aspect of the University's logo.

Head sailing coach Will Brown is disappointed that the University places these restrictions on the team, because it detracts from the club's presence on campus. The team has been remarkably successful, but many Columbia students don't know it exists.

"We are technically not the Columbia Lions—I don't really understand why," Brown said. "In the grand scheme of things, it just makes it feel less legitimate on campus and takes away from the feel of the team aspect."

The organization is student-run and led by a board of officers, who handle logistical responsibilities such as travel authorizations, space requests, fundraisers, and team workouts. New sailor Sarah Frost, BC '15 and a Spectator videographer, notes how important the leadership of these individuals has been to the squad.

"They're really driving the team," Frost said. "The team would not exist without the core nine people that really dedicate a lot of time and energy to it."

Although being a member of a student-run team requires a significant commitment from each member, co-captain Conor Cashel, CC '14, welcomes it.

"I love being able to help out just as much as I can," he said. "I really, really care a lot about the team and sport, and the opportunity to put as much of the load on my back as I can is fine with me because I really want it to get done."

The students do, of course, receive significant help from Brown. He takes charge of the technical aspects of the sport by providing feedback on their sailing, devising strategies for racing, handling the boats, and preparing the club for competitions. Brown began coaching in 2010 and has been credited with revamping the program. Under his leadership, the women's team qualified for the 2012 national semifinals, and last fall's Atlantic Coast Championships.

Additionally, Brown actively recruits each season to draw experienced and accomplished sailors to the program. The group's status as a club team puts it at a disadvantage for recruiting new sailors, as other Ivy schools such as Harvard, Dartmouth, and Yale have teams holding varsity status and can sign prospective students.

"Those schools are able to give kids likely letters and get them in the moment the kid steps on campus," Brown said. "If they sign, then they are going to that school. Here, it's really, get kids to apply and work with admissions." Brown also noted that admissions is open to discussion about prospective students, even though it can't use the same pull to bring students to Columbia as with varsity recruits.

There have been internal discussions about whether the club should become a varsity sport in the future, but the team is wary of the Athletic Department's support. Brown would welcome the transition.

"It would make the team just feel more legitimate, just being able to walk around with a Lion on your chest," Brown said.

But many of the sailors would prefer to retain the club format due to its inclusive and nurturing nature. Duggan loves the fact that although some sailors are recruited, anyone can join the club regardless of previous experience.

"I think one of the best parts of being a club sport is that we teach people who have never sailed before to sail, and if we were a varsity sport—like many sailing teams are at most colleges—we wouldn't have that opportunity," Duggan said. "Sailing, it can really be a privileged world and I think it's just so important that we allow everyone at Columbia University to come and learn to sail."

Although neither the coed nor women's team qualified for nationals this year, team members are optimistic about their chances of continuing their success and qualifying in the future.

"We got a coach three years ago and the program really started three years ago," Cashel said. "In three years you can send a team to a national championship and compete. There's a lot of room for really quick growth, so we might be at the bottom end of the spectrum right now, but if you get a couple kids in a year or two down the line, you're going to be right in the mix."