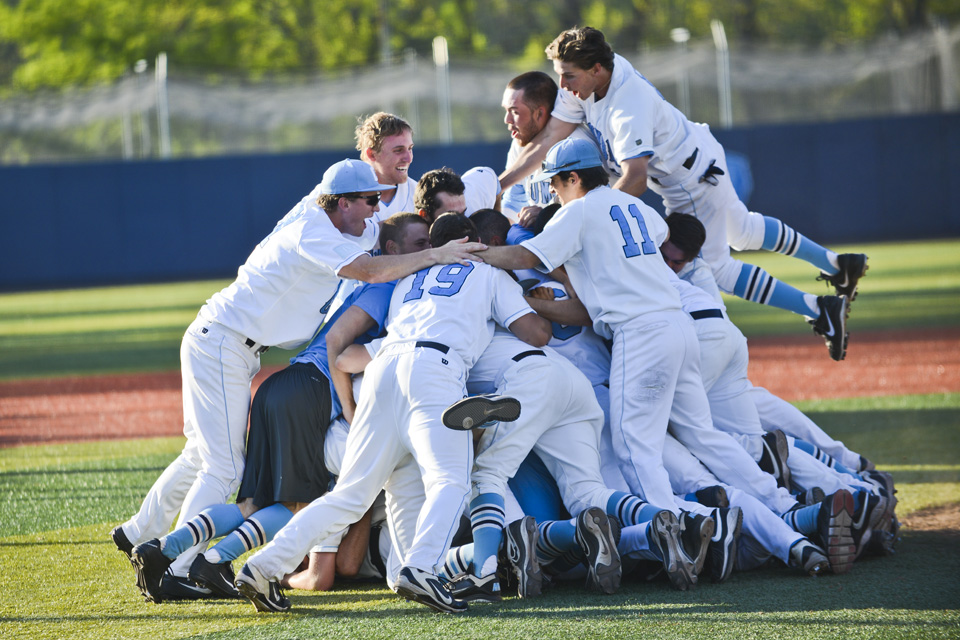 After Jordan Serena caught the game's last out in center field, the team charged into a jubilant pileup on the field in celebration.

For the first time since 2008, the Lions are Ivy League baseball champions.

Columbia (26-19, 16-4 Ivy) swept the opening doubleheader of the best-of-three Ivy League Championship Series on Saturday to seal the title. The victories came against perennial Ancient Eight powerhouse Dartmouth (32-9, 15-5 Ivy), which made its sixth straight ILCS appearance as the Red Rolfe Division champion.

"It feels great. I've been imagining this since the year started—since my playing career started, really," junior lefty David Speer said. "It couldn't be better. Everything we've worked so hard for this year coming through, finally."

The fact that the victory came against a Dartmouth team that defeated the Lions in the ILCS the last time Columbia won the Lou Gehrig Division in 2010 also gave the win a certain fairy-tale quality.

Multimedia: Click here to watch the In the Zone postgame show.

"We wanted Dartmouth all year. They beat us twice earlier this season. This senior class, they beat us back when we were freshmen, two out of three at this field," senior outfielder Nick Ferraresi said. "So it's something out of a book—it really is."

Speer got the start in Game 1 for the Lions and gave his team a solid outing. The Columbia ace gave up four runs in 7 1/3 innings, while striking out 12 Dartmouth hitters and walking none.

The Lions carried a 5-4 lead into the top of the ninth with senior righty Tim Giel on the hill. But he quickly got into trouble, as a double and a wild pitch put the tying run on third with no outs.

Though Giel did bounce back, inducing a groundout and a strikeout to get within one out of escaping from the jam, a walk and a single soon tied the game at five.

After the Lions went down in order in the bottom of the ninth, freshman righty Kevin Roy got himself into trouble in the top of the 10th, loading the bases with nobody out. It seemed that Dartmouth was poised to take the lead.

But Roy buckled down, forcing a popup and striking out back-to-back Dartmouth batters to get out of a tough spot and give his team a chance to win it in the second half of the frame.

"Kevin came in in the 10th and got out of a huge jam, which was huge for our confidence," Speer said. "And we were pretty confident after that that we were going to win the game right there."

The Lions wasted little time putting the game away in the bottom of the 10th. Junior catcher Mike Fischer hit a ground-rule double to dead center, and sophomore outfielder Gus Craig knocked him in with a single to seal the 6-5 walk-off win.

The Lions' Game 2 starter, junior righty Joey Donino, left the game after five solid innings with Columbia ahead, 4-3. But the Lions wound up needing some late-game magic after Dartmouth scored a pair of runs in the bottom of the sixth to take a 5-4 lead.

Once again, Columbia responded in a big way. The Lions put up six runs the very next inning, and at one point had eight straight batters reach base safely. Columbia quickly got back on top, 10-5.

"That six-run inning, that was huge. We just jumped on their pitching and got hit after hit," senior first baseman Alex Black said. "Just grinded out at-bats. That's when I really started getting the feeling. Oh man, that was awesome."

Columbia got two more runs in the top of the ninth to put the game on ice, and senior righty Stefan Olson retired the side in the bottom of the frame to seal the win.

The fact that everything seemed to fall into place in the final innings of both of Saturday's games was symbolic of what has in many ways been a charmed season for Columbia baseball.

"Everything clicked. Baseball, you hate to say it, but it's a lot of luck," Ferraresi said. "Balls bounce one way or another, and it's how you handle it, how you react to it. Nothing against teams in the past, but this team is fantastic. It dealt with adversity, and took everything one pitch at a time—we never got down."