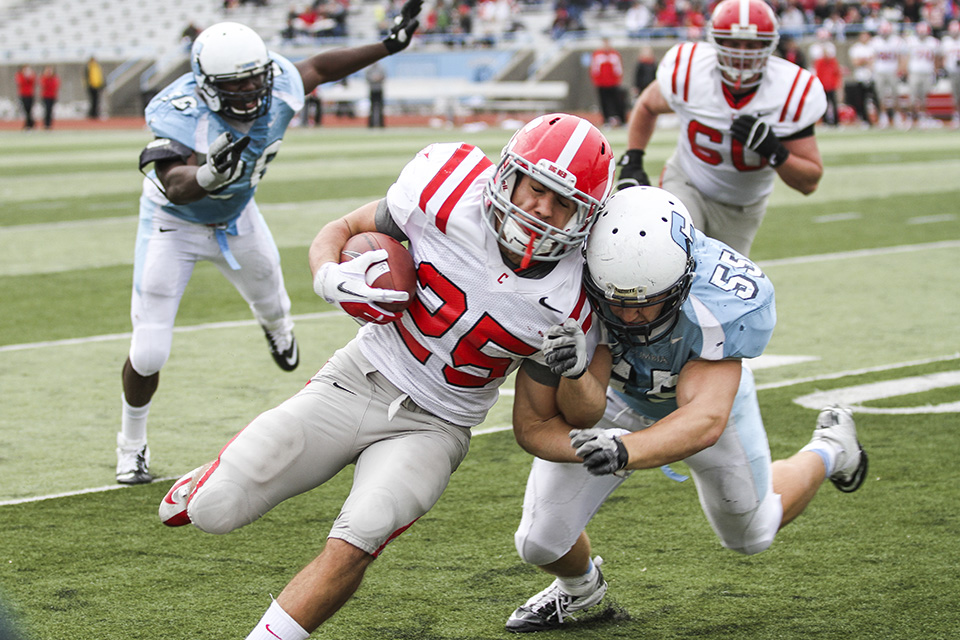 Mere hours after the football team's final game of the season at Brown on Nov. 17, Columbia head coach Pete Mangurian tweeted, "Starting Monday, we start doing everything for the second time and doing it better."

With all of the Light Blue's progress in the head coach's first year of 2012, Mangurian has plenty of reasons to believe the team will improve significantly in 2013.

With the Light Blue ending the season with an improved but still disappointing 3-7 record, Mangurian said many of the losses—especially those to Dartmouth and Penn—were an important part of the team's development, and those experiences were key to defeating Yale and Cornell.

"It was painful, no doubt about it, but it was something we had to go through," he said. "We won a close game down the stretch, and then we had one more that wasn't close. We played from a lead and extended a lead and did some things we hadn't done before."

The Lions started the Mangurian era with a nail-biting 10-9 victory over Marist on Sept. 15. The Lions scored 10 points in the third quarter, and held on to win after junior defensive tackle Wells Childress blocked an extra point.

But the Light Blue would go on to lose its next five games. The Lions had late leads against Penn on Oct. 13 and Dartmouth for Homecoming on Oct. 20, but ultimately allowed both teams to produce game-winning drives in the fourth quarter.

"You've got to learn to win," Mangurian said after the Homecoming game. "You've got to be that same team for the whole three hours and we didn't do that. We're not in the business of moral victories."

Columbia did find ways to win in two of its last four games. On Oct. 27, by a score of 26-22, the Light Blue beat a Yale team that had to play its starting running back under center due to injury, before getting blown out 69-0 at Harvard the following week.

The Lions finished out their home season with a 34-17 victory over Cornell on Senior Day, where junior running back Marcorus Garrett put up 187 rushing yards—including an 86-yard touchdown run.

Senior quarterback Sean Brackett struggled at times this season, finishing with 1,876 yards, eight touchdowns, 12 interceptions, and a 52.4 completion percentage. Mangurian said it took time for Brackett to adjust to the new offensive system, but he did a great job in the second half of the season.

A lot of Brackett's improvement came from the progression of the receiving corps. At the beginning of the season, the wideouts and tight ends continually dropped passes, but they caught the ball more consistently as the year went on.

One offensive player who especially stood out to the head coach was Garrett. The junior put up some of the Ancient Eight's best numbers, as he finished second in the league in rushing yards—with 957—and fifth in all-purpose yards—with 1,115. The effort earned Garrett first-team All-Ivy honors.

"We were very clear about what we expected of him, and when he came back in the fall, he was ready to go to work and learned every single day," Mangurian said. "For all the things that were said about our offensive line, the bottom line is they opened up for the third-highest rushing total in the history of the school."

But the defensive side of the ball is where the Lions made substantial improvements. After ranking last in the league in total defense in 2011 by giving up 414.3 yards per game, this year's team jumped up four spots at 373.5.

Columbia's most notable strength was its front seven, led by senior linebacker Ryan Murphy and senior defensive lineman Josh Martin. The defense finished fourth in the league with 27 sacks, including three by Martin on Senior Day against Cornell. His efforts earned him a non-drafted free agent contract with the NFL's Kansas City Chiefs.

"Josh deserves that," Mangurian said in April. "I don't think anybody can argue with the fact that he was a dominant player at his position. He's worked unbelievably hard in the offseason. You're just happy to see guys that work hard get a chance."

The Lions will have plenty of seniors to replace—especially on defense. With key contributing seniors like Murphy, Martin, and fellow linebacker Mike Waller, as well as defensive linemen Greg Lee, Will Patterson, and Shad Sommers, the Lions will need their younger players to step up.

But they will also have a standout new face in training camp this summer—former Stanford quarterback Brett Nottingham, who comes to Columbia with two years of eligibility remaining. Still, Mangurian said that just because he comes from such a well-known program doesn't make him "the answer to every question."

"That's not the way it works—you've got to be objective about it," Mangurian said. "All players have got things they've got to work on, and the same things he had to work on there, he's going to have to work on here. It's just not going to go away."

And as far as players already on the roster, the head coach said rising-sophomore quarterback Trevor McDonagh has made "a huge, huge jump" during the offseason.

As he did all season, Mangurian reiterated in November that despite all the noise of the past, the team is headed in the right direction.

"I have tremendous confidence in where we're going," he said. "There's absolutely no doubt in my mind we're going to win. But I know how hard it's going to be."