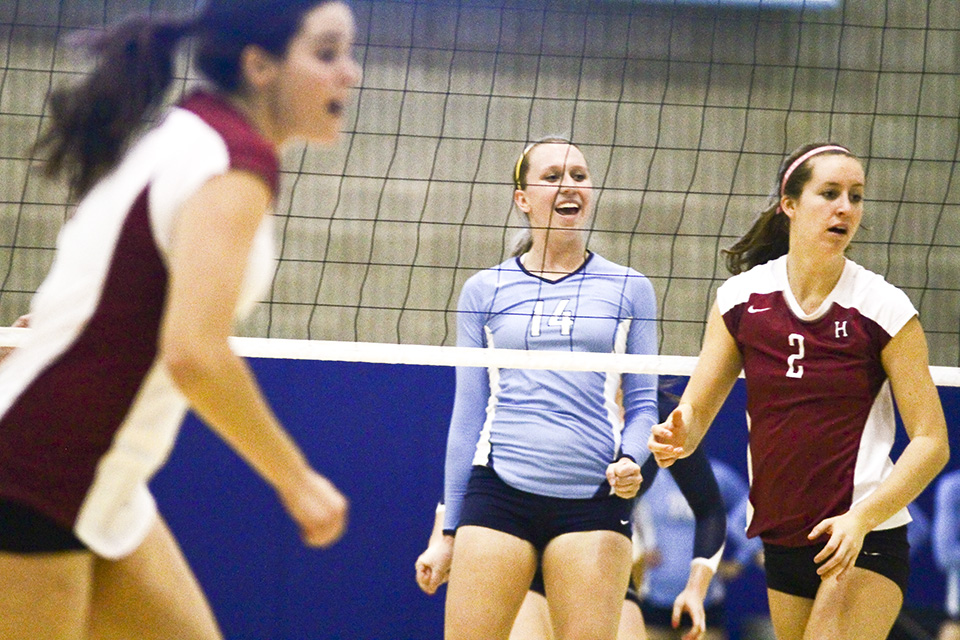 Gaughn helped change the culture of the women's volleyball team during her fours years as a Lion.

To understand senior Megan Gaughn's impact on the volleyball program, one simply has to look at the team's performance before her arrival. From 2005 to 2008, the Lions went 5-51 in Ivy play—including two 0-14 seasons in 2007 and 2008. In fact, 2001 was the only season in program history in which the Light Blue finished above .500 in the Ancient Eight.

But over the past four seasons, Gaughn has helped the team compile a 29-27 Ivy League record, including a 9-5 finish in 2012—good for second in the league. It was the first time the Lions ever finished a season in second place.

Four years ago, Columbia wasn't high on Gaughn's initial college list. But she eventually decided to commit to the Lions after conversations with Light Blue head coach Jon Wilson.

"Talking to Coach Wilson, he really shared a vision, how we would be his first recruiting class," Gaughn said. "He had only been there a few months, and he made us buy into a dream that was pretty much just a dream."

"Our entire class bought into it," she added, in reference to fellow recruits Kelsey Musselman and Heather Braunagel. "To go in and change something is a lot cooler and more rewarding experience than going into a place that's been a powerhouse for five years. So I kind of looked at it as an opportunity and being part of something bigger."

Gaughn stood out at Columbia because of her play and her leadership. Despite not being the most physically dominant player, her vision and understanding of the game allowed her to find ways to score points even when other teams stacked their defenses to try to slow her down.

"Freshman year, everything was still new," Gaughn said. "I started to realize the ball came to me a lot. Sophomore year, I definitely realized I had to take more of a vocal role. I felt like I had to be the example for everyone else on the team. But I still had a lot of help from the juniors."

Because volleyball is such a team-oriented sport, Gaughn's dominance on the court also stemmed from her ability to make those around her better.

"You're a team of 12 strong. You're only as good as the people around you," junior Colleen Brennan said. "Megan found a way not only to work hard, but also to help other people."

Gaughn also helped sell the vision of Light Blue volleyball to potential recruits. One player she convinced to come to Columbia was sophomore Molly Winger, who played with Gaughn at Lake Highland Prep and for the Orlando Volleyball Academy club team. As soon as Winger reunited with Gaughn, she noted the improvements that Gaughn had made.

"She had really developed into a good leader, and I could tell her hitting got a lot harder," Winger said. "She wasn't the best passer in high school. In college, her passing and defense improved by leaps and bounds."

With four years of strong play, Gaughn became the program's all-time kill leader in the fall with 1,264. She is also the first Light Blue player to have over 1,000 kills and 1,000 digs in her Columbia career.

As such, Gaughn graduates as one of the most decorated players in program history. She received All-Ivy selections all four years as a Lion. She made the All-Ivy second team as a freshman and then received three straight selections to the All-Ivy first team, including a unanimous selection in her junior year. She received Columbia's Varsity C award for volleyball all four years as the team's most outstanding player.

Gaughn showed a recruit around Columbia even after finishing her four years on the team, a move that spoke volumes about her commitment to the program.

"Everyone should respect where we came from, but they don't need to hear that anymore because it's already the past," she added. "That's how fast the change is."