Football remains winless after 8 games with loss to Crimson

Football remains winless after 8 games with loss to Crimson 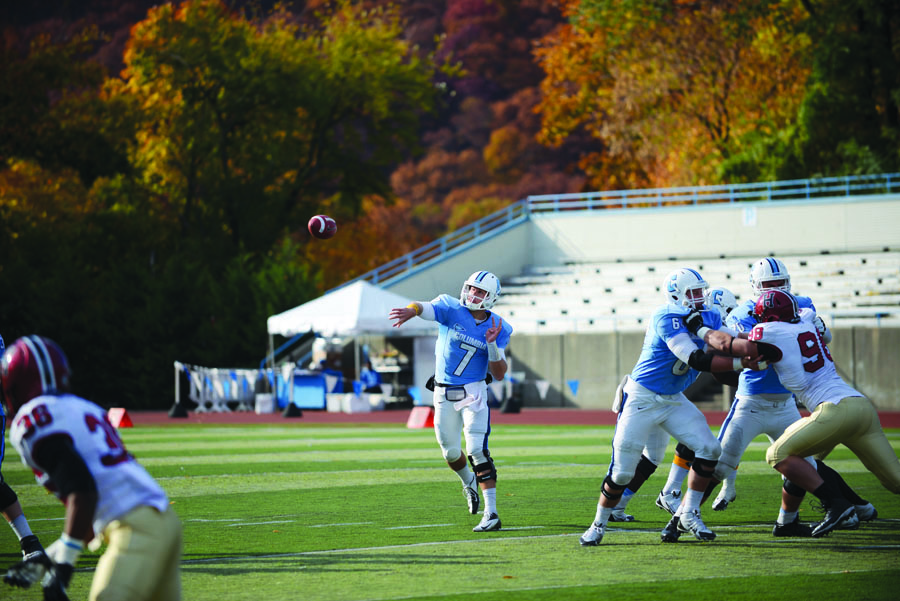 Quarterback Trevor McDonagh replaced Kelly Hilinski in the first quarter and completed 18 of his 45 passes.

The football team suffered its second shutout loss of the season on Saturday, falling to the Crimson 34-0.

Harvard (7-1, 5-1 Ivy) jumped out to an early lead and held a 21-0 advantage with 13:50 to play in the second quarter. Though the Lions kept the Crimson off the board for the rest of the half and the entire third quarter, Columbia (0-8, 0-5 Ivy) was unable to score itself and gave up a pair of field goals and a touchdown in the fourth en route to its second consecutive shutout loss to Harvard.

"The lack of consistency really hurt us. Plays were there to be made and we didn't make them," Lions sophomore quarterback Trevor McDonagh said. "We'd put a couple good plays together, then have one that would set us back."

Harvard wasted little time getting on the board against Columbia, scoring on its second possession. Running back Paul Stanton reeled off a 54-yard run to set up a 1-yard touchdown run for quarterback Conner Hempel.

The Lions went three-and-out on their next possession, and a 33-yard punt return gave Harvard the ball at the Columbia 21 with an excellent chance to add to its lead.

Light Blue junior defensive end Chad Washington strip-sacked Hempel on first down, but the Crimson recovered the fumble and scored on the next play. Stanton ran it in from 22 yards out to increase Harvard's lead to 14-0.

The Lions then went three and out on back-to-back possessions, though, allowing Harvard to add to its lead early in the second quarter. Hempel scored another 1-yard touchdown run to make the score 21-0.

Harvard looked like it was going to add to its tally once as it drove up the field late in the second quarter. The Crimson went for it on a fourth and two and looked like it had a complete pass for the first down. But senior safety Marquel Carter laid down a huge hit to jar the bar loose, leading to an incompletion and giving Columbia the ball at its own 20 with 0:49 left on the clock.

McDonagh led the Lions up the field, completing a string of passes to get the Light Blue all the way to the Crimson 19. But Columbia would get no further, as a fourth-down pass to sophomore wide receiver Chris Connors fell incomplete.

Though they did not score, the Lions' two-minute drill at the end of the half was one of the most effective offensive possessions Columbia has put together all year.

"There definitely was a little improvement. We were able to move the ball," McDonagh said of the offense's performance on Saturday.

The fact that a scoreless performance was, in many ways, one of the Light Blue offense's strongest of 2013 is emblematic of Columbia's struggles. Still, even though the Crimson has trounced Columbia in each of the last two seasons, Harvard head coach Tim Murphy also said that he saw signs of growth since the Crimson crushed the Lions 69-0 in 2012.

"They're definitely a much improved football team, even from our standpoint, over the last year," Murphy said, pointing to Columbia's first-years in particular. "It's just going to take time."

Though the Columbia offense showed hints of life, neither team scored in the third quarter. But Harvard added to its lead early in the fourth.

A 75-yard Crimson drive culminated in a 29-yard field goal by Andrew Flesher that made the score 24-0 with 13:26 left in the game. Flesher then added on another field goal, this time from 33 yards out, on the next Harvard drive to make it 27-0.

The Crimson added on another touchdown with 0:33 in the game to finish the scoring. The loss marks the second time in three seasons that the Lions have started 0-8.