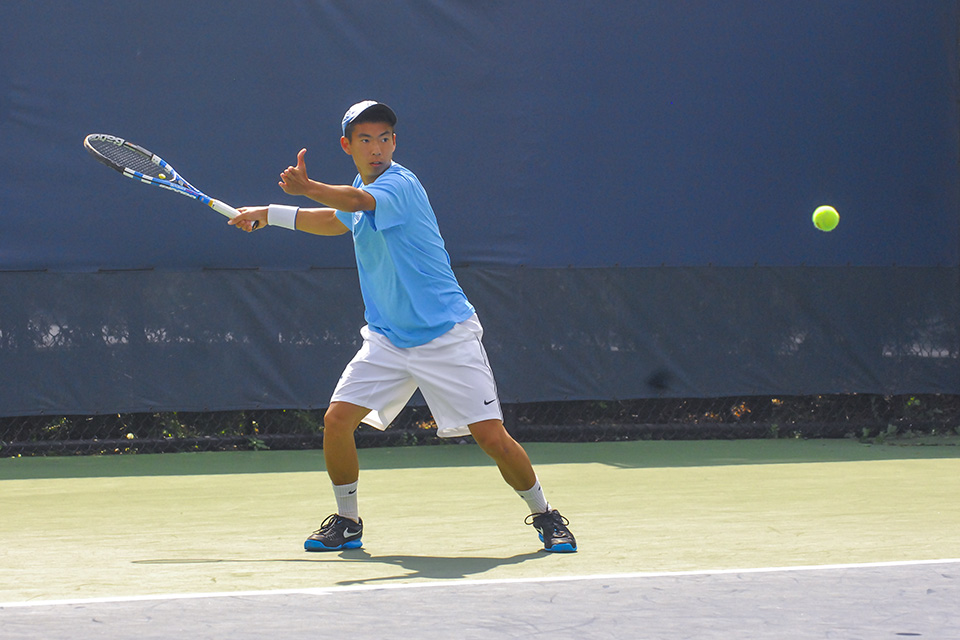 Junior Winston Lin made it to the semifinals of the tournament.

The men's and women's tennis team finished an incredibly successful fall season on Sunday at the ITA/USTA National Indoor Championships, headlined by the crowing of juniors Ashok Narayana and Max Schnur as doubles champions. But they weren't the only Lions in action in Flushing Meadows.

Junior Winston Lin, ranked No. 54 in the nation, also had an impressive showing at Nationals, defeating No. 23 Alex Sarkissian of Pepperdine 6-0, 6-2. Lin then won a tough match in three sets against North Carolina's Brett Clark before falling to Axel Alvarez of Oklahoma in the quarterfinals.

Lin has stepped up to be a leader for Columbia and has affected the entire team with his work ethic.

"Winston makes everyone better. He's the bar that everyone shoots for. If we follow Winston, we are in good shape," head coach Bid Goswani said. "You don't need to look at the great [professional] players. You just have to wake up in the morning and look at Winston, and you'll be incredibly successful."

The doubles championship should make the Light Blue the team to beat heading into Ivy League play in the spring.

The women's team did not fare as well at Nationals, but the experience should set the team up for success in the upcoming spring season.

The team of first-year Tina Jiang and junior Crystal Leung battled with No. 54 Giuliana Olmos and Zoe Scandalis of USC, but ultimately dropped the last point tiebreaker 7-5. The duo of sophomore Kanika Vaidya and senior Bianca Sanon lost their opening match 8-6 to the No. 50 team of Lauren Herring and Maho Kowase of Georgia.

Despite their tough losses, both pairs bounced back in the consolation round to defeat the No. 18 pair Tereza Bekerova and Paige Miles of Utah on successive days. Vaidya and Sanon played well in their second consolation round, but lost 8-6.

"We had mixed results," head coach Ilene Weintraub, CC '02, said. "In the first round in doubles, we went up breaks early on in matches but couldn't hold on to it. Those were winnable matches that didn't go our way."

"Every match you play at nationals is against a tough opponent. Everyone earned their way by beating the best of the best," Vaidya said.

Vaidya returned to top form in the consolation round of singles play, when she defeated Florida's Sofie Oyen in three sets. Oyen was the top ranked women's singles player at the beginning of this year, and Weintraub called Vaidya's win "one of the best matches I've seen her play to date."

But her run came to an end in the second consolation round, when she lost in straight sets to No. 27 Beatrice Capra of Duke.

Sanon did not fare any better in singles play, as she was unable to play consistently enough and hold serve when she needed to, losing both her matches in straight sets.

Nonetheless, each Lion came out with at least one win against top competition, giving them confidence going forward.

"We showed that Columbia is a very good presence," Vaidya said. "We were able to play the best of the best, putting up a fight, and we were in it the whole time. There were games in which a point or two made all the difference."

Both Columbia teams will now spend the upcoming months preparing for the Ivy season in the spring.