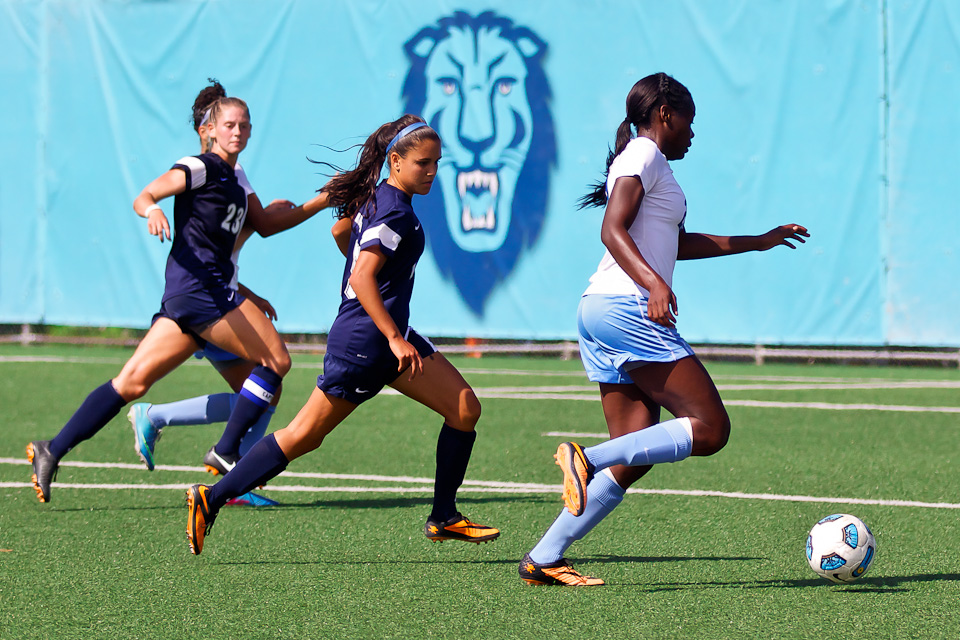 Beverly Leon's goal and Columbia's aggressive shooting kept the game competitive, but the Lions ultimately finished their season with a 2-1 loss.

"I'm incredibly proud of how we played," Light Blue head coach Kevin McCarthy said. "Anybody who was here and saw how we played saw an incredibly beautiful soccer game played with a lot of passion. We couldn't find the back of the net enough."

Harvard showed its championship pedigree early on in the match, generating a great deal of pressure on first-year goalkeeper Allison Spencer. Elizabeth Weisman broke through at the 13-minute mark to put the Crimson on the board. Though the Lions defended well for the remainder of the match, they were unable to keep pace offensively, getting outshot 8-4 and giving up five corners.

With just three minutes left in the first half, Meg Casscells-Hamby put in another shot from 35 yards out to give the Crimson a 2-0 lead.

Coming out of the intermission, Columbia showed a renewed intensity. Junior Phoenetia Browne led the Lions down the field twice before the Harvard defense committed a penalty, setting up senior Beverly Leon to take a penalty kick and make the score 2-1 with 40 minutes to play.

With fewer than four minutes left in the season, Leon put up another shot in an attempt to knot the score. But the ball narrowly drifted past the goal post after the Crimson goalkeeper fumbled it, costing the Lions perhaps their best opportunity to tie things up.

Despite putting up nine shots in the second half compared to just one for Harvard, the Lions were unable to break through.

"It's a pretty cool game, because the team that dominates possession and makes the most passes and creates the most scoring chances doesn't always win, and that was the case tonight," McCarthy said.

Throughout that hectic second half, the Lions had the champion Crimson on the ropes. But they were unable to capitalize on their defensive recovery and complete the comeback, allowing Harvard to sweep its slate of Ivy games.

"Results-wise, I believe we could have done better," McCarthy said. "Anybody who saw us play saw a team that was exciting to watch, that played really attractive soccer, that worked hard for each other, and those were things that were hard to control and I think we succeeded with that. The legacy that the seniors leave playing that style of play is one they should be really proud of."

McCarthy was effusive in his praise of the seniors.

"The seniors were great," he said. "They all had fantastic games. I wish that they had had a bit of luck, but the legacy of their style of play that our program has and ability to dominate games by keeping the ball and moving the ball is really the legacy they're going to leave. It was great that there were probably 60 or 70 little girls in the stands watching the game. I guarantee long after they remember the outcome of the game they'll remember how our girls played."