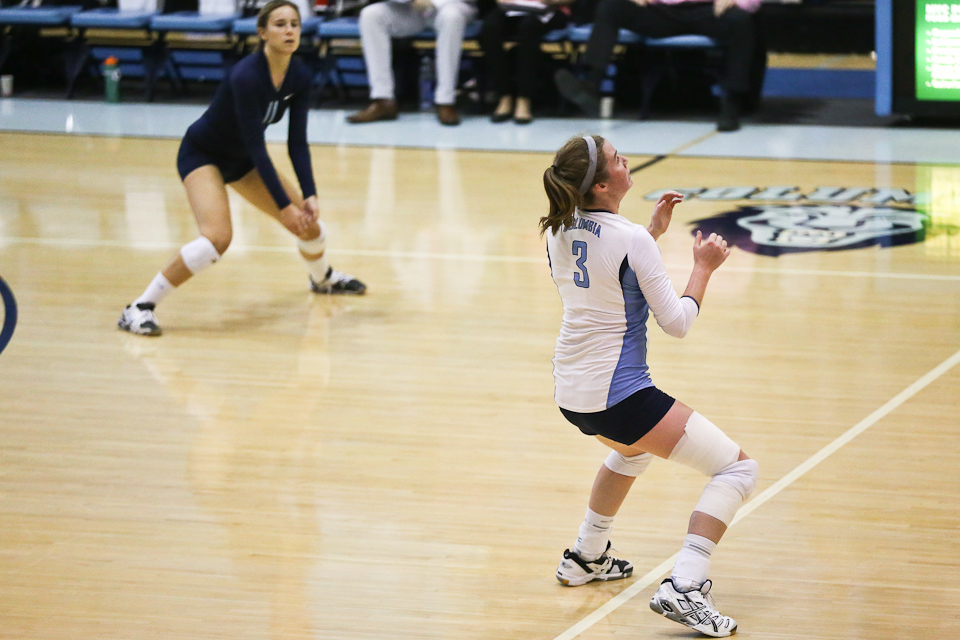 Senior captain Colleen Brennan (right) shared setting duties with first-year Jennifer Petrovich, an experience which she said taught her more about the game.

Heading into the final week of the season, the Columbia volleyball team's 5-16 overall record and its last place standing in the Ivy League are a huge setback from three previous seasons of successively better finishes.

Just last year, the Lions were in third place heading into the final weekend and clinched a tie for second place with a big win over Princeton.

This year, the team has been faced with the challenges of a younger roster and an unfortunate series of injuries to key players, including senior Savannah Fletcher and sophomore Atlanta Moye-McLaren.

"One thing that we've noticed about this team—and I think it's been true since I got here­—that the heart for all six years and the commitment has always been there win or lose," head coach Jon Wilson said. "When I first got here, we lost. Then we learned how to win, and then we learned how to win pretty good. This team, it's probably harder for them because there are more expectations."

Junior Molly Winger recounted the team's feelings early on in the season as they encountered many obstacles.

"In the beginning, with only three upperclassmen it wasn't really a setback for us, 'cause people were stepping up," Winger said. "When our senior captain Colleen got hurt, Jenn stepped up, we overcame that. Then Kat was out—when she came back we had our whole team for maybe a week."

The injury that Winger feels was hardest to deal with was the loss of Moye-McLaren, especially since other players had already been sidelined. Since Moye-McLaren's injury at Harvard on Oct. 12, the Lions have won just one match.

But there is hope going forward.

Throughout the season, Winger has been a leader and has mentored the back row, working with players such as sophomore Lucy Tilton and sophomore Bailey Springer to become better passers.

Wilson praised Springer for her offensive contributions and ability to step up for her team.

"Bailey is one of the top hitters in the conference, and she has to play six rotations all the time—she's become one of our better servers, she's been a steady force for us all the time," said Wilson. "Even when she struggles a little bit, her hitting is making us a lot of kills and breaking the game at a rate comparable to any hitter in the conference. It's been really good to see her step up from a role player last year to a central figure that's carrying a load."

Springer said that though she and the other sophomores saw playing minutes last year, they have a much bigger role this season.

"For us to take these huge leadership positions, it was a lot of uncertainty this first half of the season," she said. "We haven't defined our roles that well, and that has contributed to the drop off in the second half of the season."

Senior captain Colleen Brennan points to the character of the team and the maturity of the younger players as a positive sign.

"As freshmen, it's a different game than what you've been used to. All of them are a huge part of the team, so they had to get in there right away. We also had a big sophomore class and they had to step up in their way, as did Molly, as did Sav and I as seniors. We've had to step out of what we've been used to for the last few years and really get tough in a lot of ways."

Brennan has shared setting duties with freshman Jennifer Petrovich, who is one of the team's talented underclassmen.

"To be honest with you, I think we both learned from each other. I've learned so many things from Jenn and that's what's nice about collegiate athletics," Brennan said. "Even as a senior, you still have so much to learn. "

Brennan is hopeful that the season, while disappointing in terms of wins and losses, has been meaningful for the players and for the program.

Correction: A previous version of this article incorrectly stated the Lions have gone winless since Atlanta Moye-McLaren's injury. Spectator regrets the error.