Football falls to Cornell 24-9, remains winless with 1 game to go

Football falls to Cornell 24-9, remains winless with 1 game to go 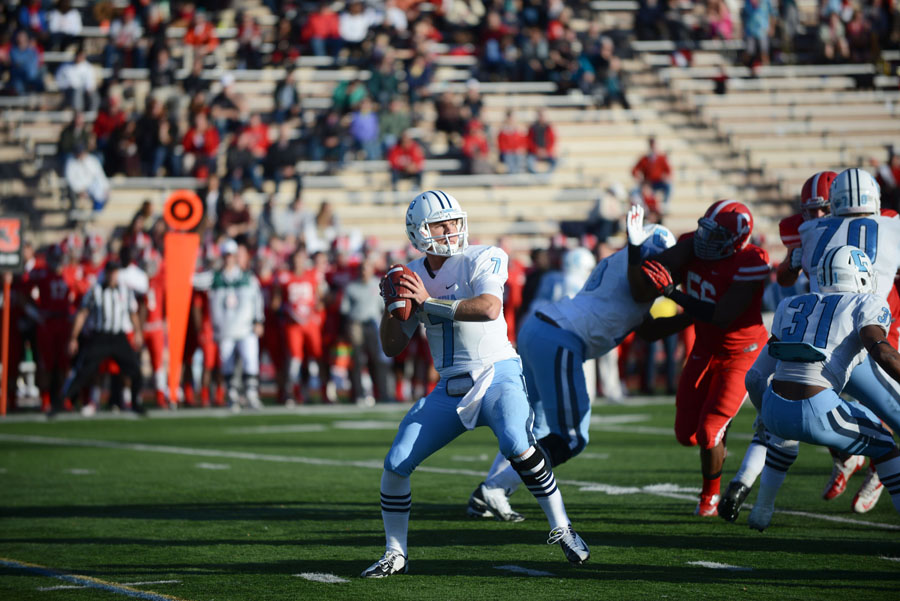 Sophomore quarterback Trevor McDonagh threw for 292 yards, but could not lead the Lions to victory in Ithaca.

ITHACA, N.Y.—For the second time in three years, the football team has started a season 0-9.

The Empire State Bowl trophy, awarded each year since 2010 to the winner of the Cornell-Columbia matchup, will be in Ithaca for the next year following a Columbia (0-9, 0-6 Ivy) loss on Saturday. Despite playing without injured quarterback Jeff Mathews—the all-time Ivy leader in career yards passing with 10,817 and second all-time leader in career passing touchdowns with 68—Cornell (2-7, 1-5 Ivy) was nonetheless able to handle the Lions, coming away with a 24-9 win.

The game was much closer than most of Columbia's contests have been this season. The Light Blue was within one possession early in the fourth quarter, but a late-game meltdown prevented the Lions from making it interesting down the stretch.

"Disappointing, for a number of reasons, not all just related to football," Lions head coach Pete Mangurian said after the game. "I was really concerned with the lack of poise we showed at the end of the game. That disturbs me more than anything."

[Multimedia: Analysis of the Light Blue's 24-9 loss to the Big Red]

With the score at 17-9, Big Red tight end Ty Bostain and Columbia senior safety Marquel Carter both went up for a tightly contested seven-yard pass from quarterback James Few on second-and-goal. They were still fighting for it when they hit the ground in the end zone, and for a moment it looked like Carter had come away with the ball.

He started running downfield, but the play was ruled a Cornell touchdown, triggering on-field protests from the Lions players that resulted in a 15-yard unsportsmanlike conduct penalty.

"Penalties, unsportsmanlike conduct—there's absolutely no place for that," Mangurian said. "It's totally unacceptable. It's not going to be what this program's about."

Despite putting together a promising drive that got as far as the Cornell 25 on its next possession, Columbia was unable to get back in the game.

"I thought we were playing well, came out strong, and then we gave up a lot of third-down conversions, which really killed us," sophomore linebacker Mark Cieslak said. The linebacker had a great game for Columbia with 12 tackles, including a sack and 2.5 tackles for loss. "Towards the end, our emotions got the best of us, a couple of us, and really hurt us."

Cornell got on the board first, driving up the field 63 yards to set up a 38-yard field goal that gave the Big Red a 3-0 lead. But the Lions quickly struck back to even the score.

After a lull in the action, Cornell was able to put together a scoring drive that took up most of the second quarter. The 19-play, 80-yard possession took 10:09 off the clock and allowed the Big Red to regain the lead, 10-3, on a one-yard touchdown run by Few.

With less than a minute to go in the half, Columbia got the ball at its own 40. Thanks to a 23-yard pass from McDonagh to sophomore wide receiver Cris Connors along with a roughing the passer call, the Light Blue got in position to score. After an incomplete pass, Eddy nailed a 42-yard attempt to bring the Lions within four at halftime.

But Cornell wasted little time building its lead when action resumed. The Big Red put together a 69-yard drive to open the third quarter, putting another seven points on the board with a 16-yard touchdown pass from Few to wide receiver Ben Rogers.

Though the Lions quickly made it a one-possession game with another field goal, for the third time in as many tries Columbia was unable to come away with a touchdown in the red zone.

"We'd move down the field, then [in the] red zone kind of stall out, make a few mistakes," McDonagh said, adding that inconsistent play made it difficult for the Lions to get in a rhythm offensively.

As the Light Blue was driving up the field in the fourth quarter, a McDonagh pass was intercepted by Cornell safety Twan Terrell, setting up the Bostain touchdown that gave the Big Red a 24-9 lead.

Neither team would score again. Columbia's loss marked the first time all season that the Light Blue has held an opponent to fewer than 50 points on the road.