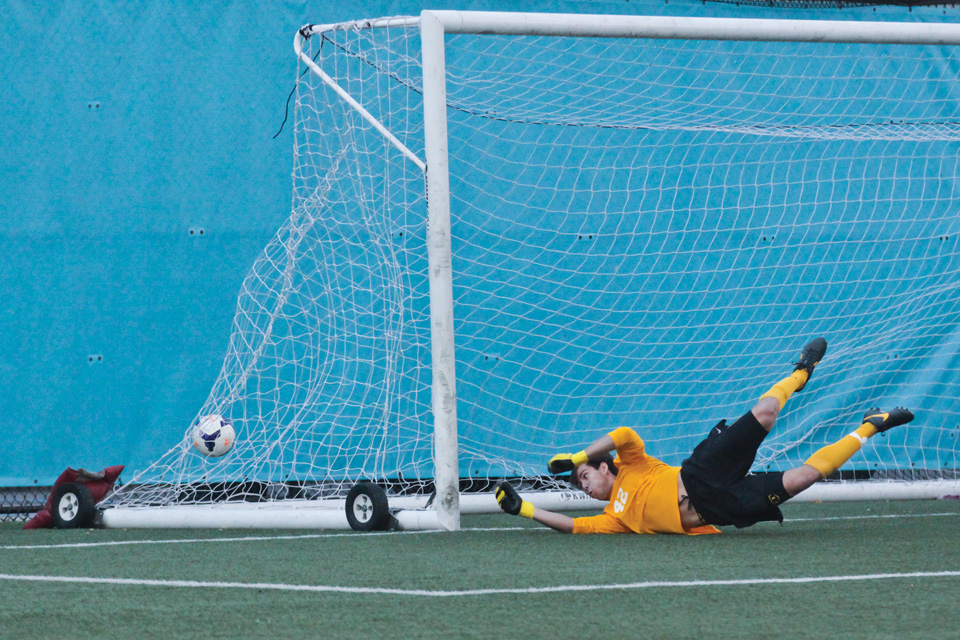 The Lions strong possession game slipped in the second half of the season, leading to fewer goals for and more goals against. The team only won one Ivy game.

A year ago, the men's soccer team managed a fifth-place finish in the Ivy League standings. Lacking firepower, the team looked to stay organized defensively, get good goalkeeping from then-first-year Kyle Jackson, and crank out a low-scoring win. During conference play, that formula worked twice, in 1-0 wins over Harvard and Penn.

The Crimson and Quakers battled with the 2013 Ivy title on the line on Saturday. Meanwhile, the Lions (8-6-3, 1-3-3 Ivy)—themselves much more talented than they were in 2012—fell 3-0 to Cornell to finish seventh, with only a single conference win to their name.

"Coaches and players included, we're all a little disappointed in how it went," senior midfielder David Najem said.

The season started well. After dropping both games in a season-opening road trip that included a game against then-No. 2 Creighton, the team rolled off five wins in a row, scoring 12 goals and allowing only two over that stretch. Offseason changes—the return of senior striker Will Stamatis after he missed the 2012 campaign thanks to injury, the additions of skilled first-year midfielder Andrew Tinari and first-year forward Nicholas Pappacena, and Najem's move to the wing up front—helped the team control the ball for most of its games.

But there were still some issues. The team started slowly in the last couple of games of that streak, and that trend continued into the Ivy opener against Brown. The Lions found themselves down two before coming back to tie the game.

"At times, when things were going well, we got complacent," Stamatis said.

The well-oiled Light Blue attack began to falter. Columbia's passing game wasn't as smooth as it was earlier in the season, and bad passes killed attacks before they got past the midfield.

Stamatis explained that the Lions were not "holding each other accountable and making sure we [they] stay hungry," or not "being a cannibal," as Najem put it.

The downward spiral continued. The team drew Ivy champ Penn, 0-0, and only had the better of play for less than 40 minutes of the 110. It followed that performance with a blowout loss at No. 10 UConn and a 2-1 loss to Princeton. After briefly rebounding to defeat Dartmouth and Binghamton, the Lions hosted Yale and, after another slow start, needed a frenetic rally in the final ten minutes to earn a draw. They closed the season with losses to Harvard and Cornell.

Nonetheless, both Stamatis and Najem believe the program has improved since they joined the team and has made strides forward this season.

"A lot of guys have gotten on board, and they've seen what it takes to be a winning program and how that differentiates from a championship program pushing it every day, working as hard as possible for as long as possible," Najem said. "I think we've seen more frequent stints of good soccer."

Stamatis said that the team culture now is very different from in his rookie season in 2009. "I think we were just a little too comfortable with losing," he said, noting the team's 4-12-1 record that season and its disappointment this season at finishing 8-6-3. "Every huddle we were in, we always say 'family,' now, which is completely different than when I got here."

In Stamatis' junior season two years ago, Columbia relied heavily on its seniors, and the talent drain left the team without many experienced options the following year. The Light Blue this season was not as reliant on its seniors, with only four playing regularly—Najem, Stamatis, midfielder Henning Sauerbier, and center back David Westlake—putting itself in better position to withstand their graduations. But given how this past season unraveled with those four in the lineup, in order to take another step toward becoming a championship program, the precocious first-years and sophomores need to avoid the same mistakes they and the rest of their teammates made this season.

"I think this season should serve as a good reminder in the future of what can happen when you get complacent," Stamatis said.