0-10: Football falls to Brown to go winless for 6th time in program history

0-10: Football falls to Brown to go winless for 6th time in program history 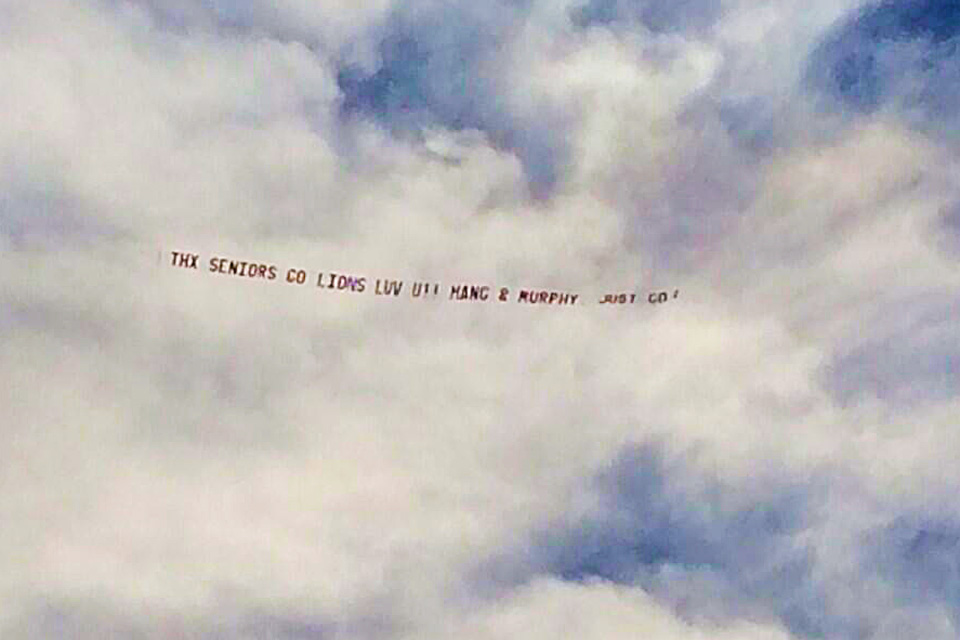 The Light Blue's nightmarish season has led to a lot of frustration with both head coach Pete Mangurian and athletic director M. Dianne Murphy.

Frustration was literally in the air at Robert K. Kraft Field Saturday afternoon.

For part of the second quarter, a plane circled above the field, trailing a banner calling for the departure of Athletic Director M. Dianne Murphy and head coach Pete Mangurian. It read, "THX SENIORS GO LIONS LUV U!! MANG & MURPHY...JUST GO." Columbia (0-10, 0-7 Ivy) trailed for the duration of the game and fell to Brown (6-4, 3-4 Ivy), 48-7, to finish the season winless for the first time since 1987.

[In the Zone: Highlights, analysis of Columbia's 48-7 loss to conclude its 0-10 season]

"Obviously not the way we wanted to end the season. As I told the team inside, I really have two sets of feelings right now," Mangurian said after the game. "One for the seniors, and how hard they've worked and what they've put out there, and one for the rest of the guys that have to make a decision on whether this defines them or it doesn't."

"There's no other way to put it—tough," he said of the seniors' experience in the 2013 season.

But East, who had a forced fumble and 18 tackles on the afternoon—including two for a loss—did not say that he felt the entire season was a waste.

"The record shows what it is, but at the end of the day, I cherished this year," East said, expressing his confidence in the program's future. "If I had two more years with Coach Mangurian, that'd be very, very special. And those underclassmen are very lucky because we all know that no matter what was shown on the field, this program is truly going in the right direction."

Many people outside the program do not share East's outlook, with harsh criticism coming from throughout the extended Columbia community. But regardless of the ongoing punditry surrounding the team's future, it was Brown that stole the show on Columbia's Senior Day.

Led by running back John Spooney, the Ivy League's top rusher, the Bear offense turned in a dominant performance. Spooney had 186 yards rushing to front Brown's attack, while quarterback Patrick Donnelly turned in a great performance under center, finishing with 305 yards and four touchdowns on 22-of-37 passing. Columbia did not fare nearly as well. Hampered by a very weak passing game, as it has been all season, the Lion offense was unable to find any kind of rhythm between a barrage of dropped passes and poor quarterback play.

"The inconsistency, I mean it's been a problem for us," sophomore signal-caller Trevor McDonagh said. "We've been working on it, working on the drops and missed throws, and just got to keep working on it. We're going to be working on it all offseason."

McDonagh would finish the afternoon with 149 yards, a touchdown, and three interceptions on 16-of-50 passing.

The Bears' first score came on a 45-yard run by Spooney with 8:13 to play in the first quarter, and Brown added to its tally on its next possession when Donnelly found wide receiver Jordan Evans for a 13-yard touchdown strike.

The Lions, on the other hand, struggled mightily in the early going. The Light Blue had a net of 14 yards on 19 plays in the first quarter and was kept off the scoreboard in the first half.

Ahead 14-0 after the first quarter, Brown tacked on a field goal and another touchdown in the second to go up 24-0 going into the intermission.

Not much changed in the second half.

The Bears extended their lead to 31-0 with a two-play, 75-yard touchdown drive on the first offensive series of the third quarter. A 35-yard run by Spooney set up a 40-yard pass from Donnelly to wide receiver Telleff Lundevall.

Columbia's offense finally broke through on its next possession, as McDonagh found first-year wide receiver Toure Douglas for a 12-yard touchdown pass that made it 31-7.

But the score proved to be little more than a drop in the bucket.

Brown responded with a field goal and tacked on a touchdown in the third, followed by another in the fourth to make it 48-7.

Neither team would score again, as Columbia's dismal season came to a fitting end.