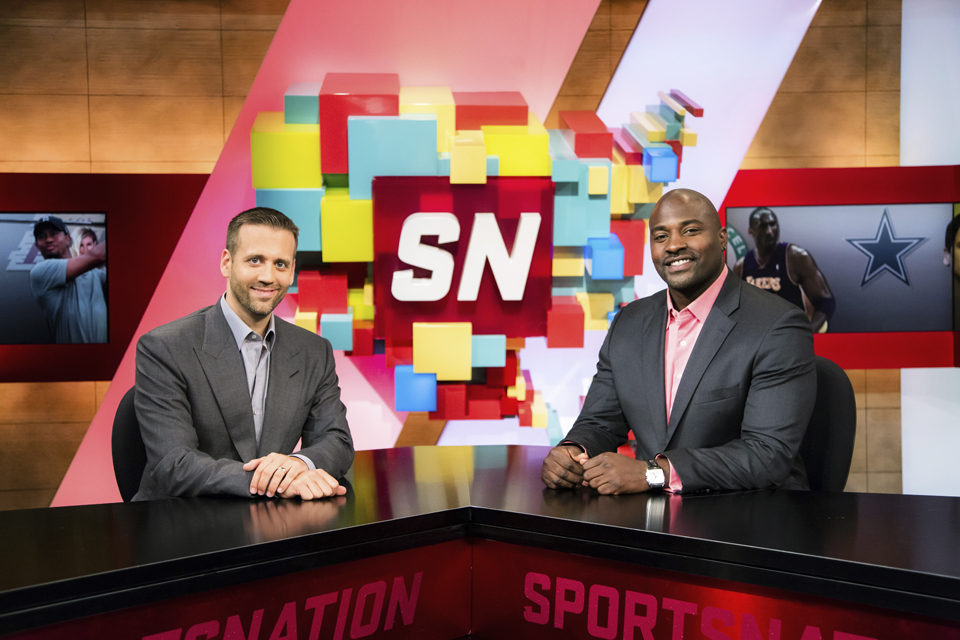 Max Kellerman, CC 98 (left), and Marcellus Wiley, CC 97 (right), after going through school without getting to know each other, met in Los Angeles a few years ago and decided to become radio co-hosts.

While Sunday's Super Bowl may not feature any prominent Columbia connections, come Monday, there will likely be two alumni talking about it extensively on the radio and television.

At first glance, Kellerman and Wiley appear to be a study in opposites. Kellerman grew up in Greenwich Village, while Wiley hails from Compton, Calif. While the 6-foot-4, 276-pound Wiley played in the NFL for 10 seasons, Kellerman started his own public access television show when he was 16, and got a job with ESPN out of college.

But despite their different backgrounds, the two have become close friends in recent years as fellow sports broadcasters.

"There's some hilariousness between us that is pretty funny—black, white, athlete, no athlete, big guy, little guy—but then some things we really have in common," Wiley said. "So as much as I'm from Compton and he's from Greenwich Village, we found common ground."

Initially, that may have been academics. Wiley chose to go to Columbia largely because of what it offered in the classroom.

"I thought I should look at myself for who I truly am—a guy who does well in the classroom and does well on the football field," Wiley said. "I thought if I did have to choose one to shortchange it would have to be football, because an athletic career is shorter than a life span."

Kellerman's and Wiley's paths did not cross during their three years together in Morningside Heights. After graduation, Wiley was invited to the NFL Scouting Combine, and soon after signed with the Buffalo Bills. The former Light Blue tailback, defensive end, and kick returner­­, defying the usual expectations for an Ivy League football player, went on to a Pro Bowl NFL career.

"I felt like I played for 10 years in a dream world—it wasn't reality," Wiley said. "I looked at the NFL not in the way as a lot of other guys did who were expected to be there, and therefore, there was a certain arrogance. I always looked at football with a humbler approach. I liked to talk about it—the sociological experience of playing football. I liked it from a fan's perspective. I would internalize it, and broadcast it informally because I was confidently articulating my experience to people."

Six months after leaving the NFL, and finding retirement boring, Wiley interviewed for ESPN in October 2007. Wiley has been working there ever since.

Kellerman, on the other hand, entered the sports broadcasting scene in high school. He started a public access show, "Max on Boxing," and continued through college. As a senior, the history major sent video clips to media outlets, which led to appearances on local television shows, including "Late Show with David Letterman." Since graduating, Kellerman has hosted various sports shows—including ESPN's "Around the Horn"—and calls boxing broadcasts biweekly for HBO.

More than a decade after graduation, the ex-football player Wiley and the broadcaster Kellerman met in Los Angeles, where they discovered that they look at sports issues in similar ways.

"We clown a lot but we also aren't scared to discuss social and psychological issues, and I think that's when we're at our best," Kellerman said. "Not just on the field, but also off the field."

Wiley, who graduated with a degree in sociology, said he has always had an interest in analyzing the similarities and differences between people—an interest that shows itself in the two Columbia alumni's shows.

"Oftentimes, the idea is that talking sports is like going to a bar—you don't discuss religion or politics, because it can be divisive," Kellerman said. "But with sports, often interesting social issues come up. Many have mastered the art of talking around them, but I've tried to deal with the central issues as much as possible."

"We talked about the sociology and psychology of the comment, and the media's reaction to the comment," Kellerman said. "The cultural criticism of sports is, I think, when we're at our best. We also like to geek out—talk x's and o's—and as sports fans that's fun to do, too."

The two also often talk about their personal lives, which Kellerman says adds an element of honesty. It also gives Wiley a way to share his experiences as a professional athlete.

Last year, the unlikely duo was rewarded for its couple of years of good work on the radio, with the opportunity to host a TV show on ESPN2. After a daily morning meeting, Kellerman and Wiley tape "SportsNation" from noon to 1 p.m. before hosting "Max and Marcellus" from 3 p.m. to 7 p.m. When they go home, they're constantly doing homework—watching games and staying up-to-date with the news.

"I see Marcellus more than anyone in my life, and I'm having a lot of fun—it's a blast," Kellerman said. "I feel as though we're in the early stages of something good."