Men's basketball upsets Princeton at Jadwin for 1st time since 1993

Men's basketball upsets Princeton at Jadwin for 1st time since 1993 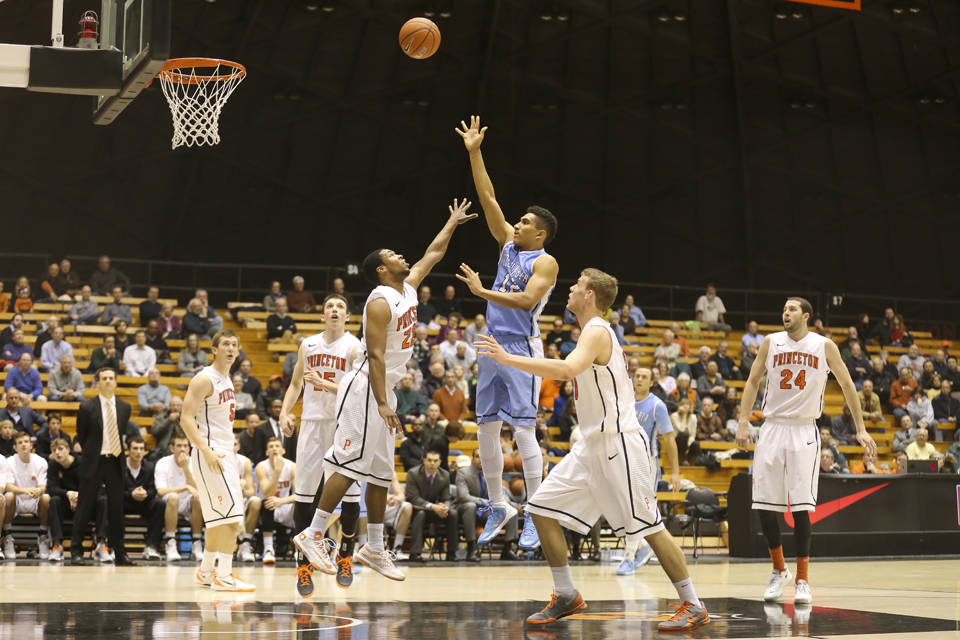 Princeton did a good job keeping the Columbia big men out of the paint, but was less successful against the Lion guards.

PRINCETON, N.J.—For the men's basketball team, it looked like another one of those nights. The Lions fell behind by three possessions early on and entered the break down 33-25, having shot only 33 percent in the first half.

The team came out with new life in the second half, and the game came down to the wire.

With the Tigers leading by two with about 35 seconds left, sophomore guard Maodo Lo missed a jumper, but junior forward Alex Rosenberg was quick to react to the rebound and secured a jump ball in Columbia's favor. Off the inbounds, junior guard Meiko Lyles drained a three to put Columbia up, 53-52.

"It felt good when it left my hand," Lyles said. "The whole team believed."

"We got some shots, but most importantly, we got some stops," Rosenberg said. "We talk about it every day in practice. One stop."

The Lions came out of the break and went on a 17-7 run in the first five-and-a-half minutes. Threes from Lo and sophomore guard Grant Mullins tied the game at 37, eliciting a roar from the Columbia bench, and a layup from junior center Cory Osetkowski a little later put Columbia ahead, 42-40.

"At halftime, we knew we had to come out with a little more attention," Lyles said.

With the Light Blue on the defensive end, Mullins fell and stayed on the floor. Columbia eventually got the ball back and Mullins was able to walk off the court under his own power, but did not return to the game.

The Lions lost focus defensively for a pair of possessions and surrendered back-to-back easy layups to fall behind by two. They left first-year forward Spencer Weisz open for a three on their next trip down the floor, but he missed.

The teams traded miss after miss, scoring only eight points in six minutes. Bray finally knocked down a three from the corner with a little over six minutes to go to put the Tigers up 47-44. After Rosenberg converted a three-point play to tie the game, first-year forward Steven Cook knocked down another corner three to restore Princeton's lead—setting the stage for Petrasek's rebound and Lyles' shot for Columbia's first win at Princeton since 1993.

"Really, once the ball goes up, I really do think that stuff goes away for the most part," head coach Kyle Smith said. "We need to focus on what we can control, and that's all we can control."

Correction: A previous version of this article stated that first-year forward Luke Petrasek pulled down the rebound on Princeton's final shot. It was junior forward Alex Rosenberg. Spectator regrets the error.