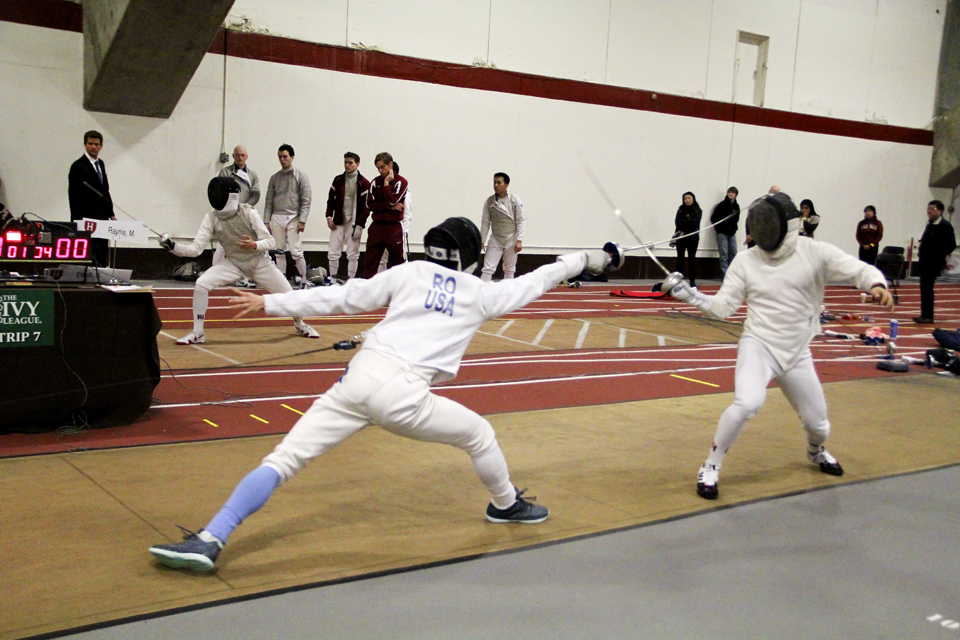 Sophomore épéeist Brian Ro was the top-performing male épéeist at the Ivy Championships, helping Columbia earn a share of the title.

The Light Blue will share the title—its first since 2008—with Harvard, as both teams went 4-1 on the weekend. The men clinched the title after a narrow win over Yale early Sunday afternoon. But the critical moment of the tournament for Columbia came against the reigning champion Crimson earlier in the day.

The Lions were down 13-12 with two points still undecided against, but managed to win both to secure the 14-13 win. Sophomore épéeist Brian Ro and sophomore foilist Harry Bergman clinched the Lions' victory in simultaneous touches in two bouts on adjoining mats. Columbia head coach Michael Aufrichtig called the victory the "single most favorite sports moment of my life."

That victory came on the heels of a similar 14-13 decision against Harvard for the women's team, but in which Columbia came out on the losing end.

The women's team one-point loss to the Crimson came en route to a 4-2 record and a third-place finish. Despite going a perfect 3-0 against Penn, Cornell, and Brown on Saturday, the Light Blue suffered a serious blow when Olympian Nzingha Prescod was forced to the sidelines due to an injury on the first day of the tournament.

Aufrichtig said he expects the junior foilist to fully recover within the next few weeks, but her absence required the Lions to use a replacement—first-year Sara Taffel.

"I was definitely really nervous, but I was also really excited because I wanted to prove myself and my abilities," Taffel said. "It was unfortunate that Nzingha couldn't fence, but it was an awesome opportunity for me to step in and fence really hard schools, and I was happy that I performed the way that I did."

Despite the sudden change, Taffel went 15-2 over the weekend, posting the second-best record for a foilist on the women's side. Her performance granted her a position on the first-team All-Ivy squad, along with Light Blue sophomore foilist Margaret Lu.

Following the tight Harvard contests, both squads were able to easily conquer Yale, as each picked up a 19-8 triumph over the Bulldogs.

But the Lions had yet to face the weekend's biggest challenge—Princeton.

For the women, defeating No. 1 Princeton, which had not lost a match in over a year, was the only way Columbia would have had a shot at the title. But the Light Blue fell to the Tigers, 19-8, leaving the Lions in third place, behind Harvard and Princeton.

Columbia's men were also unable to dispatch the Tigers, missing a chance at an outright title.

The Lions and Tigers went back and forth in the race for the 14th team point. Sophomore épéeist Jake Hoyle fell in a narrow 4-5 defeat as the score shifted to 13-12 in favor of Princeton. Then, in a grueling final bout, sophomore foilist Adam Mathieu lost to give the Lions their first and only loss of the weekend.

While the men's team initially appeared disheartened from the loss, the reality of their being Ivy League champions returned to the atmosphere as the awards ceremony approached. Ro, who was named first-team All-Ivy, said he realized the importance of the Lions' accomplishments.

"Since we came so close last year, but we didn't win, I think this is a big step up. But it's still hard that we have to share the title," Ro said, after apologizing for losing his voice cheering on his teammates. "I'm glad I'm here and that I'm able to represent my school with all of my really close friends who are also fencers. It's really an honor."

Columbia sophomore sabrist Geoffrey Loss was named the Most Outstanding Performer on the men's side. Loss tied for the best record among male sabrists at the tournament—going 12-3 over the weekend.

The Columbia fencers will continue into individual competition following Ivies. Several members from the men's team will compete at the Junior Olympics next week. The team will then get back together next month for the NCAA Regional Championships in Wellesley, Mass.