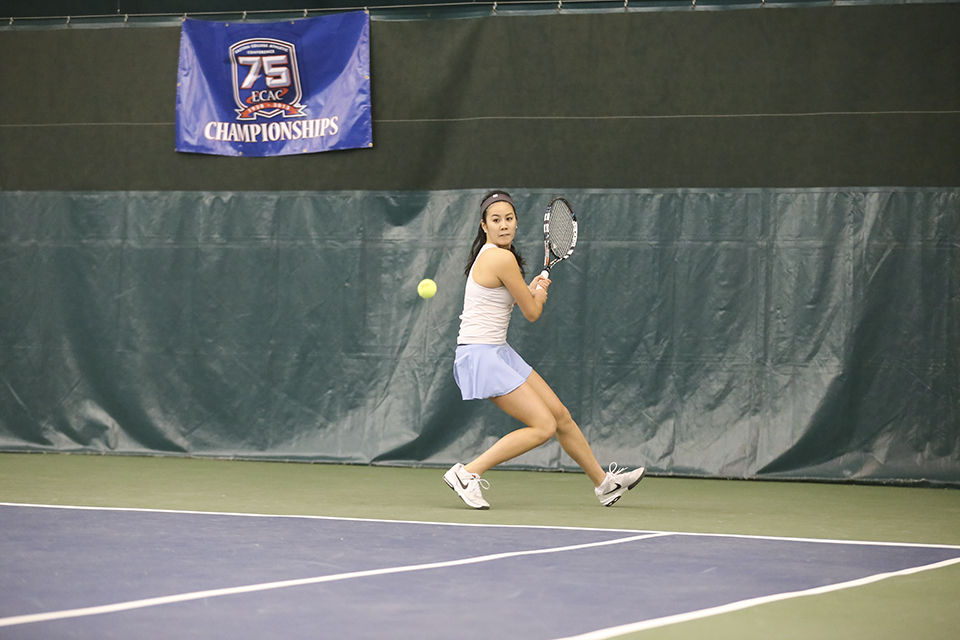 Junior Crystal Leung partnered with first-year Tina Jiang to come from behind and clinch the doubles point for CU against Yale.

The women's tennis program tacked on a title to its string of recent successses by winning its first-ever Eastern Collegiate Athletic Conference tournament this weekend. In the six-team competition of Ivy squads, the No. 51 Lions upset No. 32 Yale in Sunday's final in front of a loud crowd at the Dick Savitt Tennis Center.

Winners of the previous three Ivy titles, the Bulldogs also came into the weekend looking for their fifth consecutive ECACs victory. But the Light Blue, which shared the Ancient Eight championship with the Elis last spring, emphatically denied Yale.

"We wanted them to know that we're coming for them this year," senior Bianca Sanon said. "Our coaches keep telling us in every team meeting, 'Send a message.' And I think this was the message we wanted to send to them: This year, we're not sharing the Ivy title with anybody. We want this title for ourselves."

That message came through loud and clear, beginning with the doubles competition. Sanon and her partner, sophomore Kanika Vaidya, beat Yale sophomores Madeleine Hamilton and Ree Ree Li, 6-2, in the No. 1 match, but seniors Tiana Takenaga and Ioana Alecsiu lost in the No. 3 match, 6-1. This put the onus of earning the pivotal doubles point on junior Crystal Leung and first-year Tina Jiang at No. 2.

With the match tied at three, Leung hit a second serve into the net to put Yale up a break. But the duo came back to earn a break point of its own, tying it up at five all.

The match advanced to a tiebreaker, and with the other matches completed, all eyes were on Leung, Jiang, and their opponents Hanna Yu and Sherry Li. The Columbia duo fell behind, 6-3, but rattled off a stunning five consecutive points—saving three match points—to earn the Light Blue the doubles point.

"They were a very good team," Leung said of Yu and Li. "They had three match points, and we said, No. We're coming back, all the way back, one point at a time.' We didn't give them any shots—just went for it."

"I knew we had to win the doubles point to win this match," head coach Ilene Weintraub, CC '02, said. "Yale is very solid overall, and I think they're even better in singles. So for us to come back and win that doubles point was a huge momentum swing for us, and I think we were able to build on it in singles."

In singles play, though they lost at No. 5, the Lions won on the No. 1, No. 3, and No. 6 positions to clinch the victory. Jiang was first off the court at No. 3, taking out Sherry Li, 6-4, 6-4. No. 75 Vaidya was next to win with a straight-set drubbing of Hamilton in the No. 1 singles spot. While Hamilton sent the first set to a tiebreaker, the rest of the match was all Vaidya. She won the tiebreaker 7-0, and bageled Hamilton in the second set to put the Lions up 3-1.

"I think my serve clicked—my serve got me going through it," Vaidya said. "And I just really wanted that trophy. I just went out there and played, and I think I got on top of her from the first point of the second set, and that kind of got the momentum going for me."

Less than five minutes after Vaidya's victory, Alecsiu clinched the championship when she broke Courtney Amos' serve to win her match, 6-4, 6-4.

"We've worked since we were freshmen towards this title," Alecsiu said. "The first two years we didn't even pass the first round, and I think this is just a result of our really hard work."

One element of this match that doesn't appear in the box score is the home crowd. Multiple team members spoke of the crowd's positive energy as one catalyst for victory.

"The doubles was a huge clinch, and I think it had everything to do with the fans," Sanon said. "Today, I think that definitely made the difference."

To advance to the final, the Light Blue defeated No. 69 Princeton in Saturday's semifinal. The Lions top-two doubles teams each won 6-4 to secure the doubles point. Then Vaidya, Sanon, and Takenaga each won their singles matches in straight sets for a 4-1 final score.

The ECAC championship, which this year lacked Binghamton and LIU Brooklyn due to weather concerns, is the latest in a string of unprecedented success for the Light Blue program, and the team said it is still hungry for more.

"In our first team meeting I said to the girls, 'Our goal is to win the Ivy League outright, and to make the postseason. And if not, we want to be in the top 40 so that we make the postseason no matter what,'" Weintraub said. "This win is one step forward to getting that ranking up there."

Ivy play may not begin until March, but the Lions have put the rest of the Ancient Eight on notice. They'll be back in action on Saturday against Maryland at home.