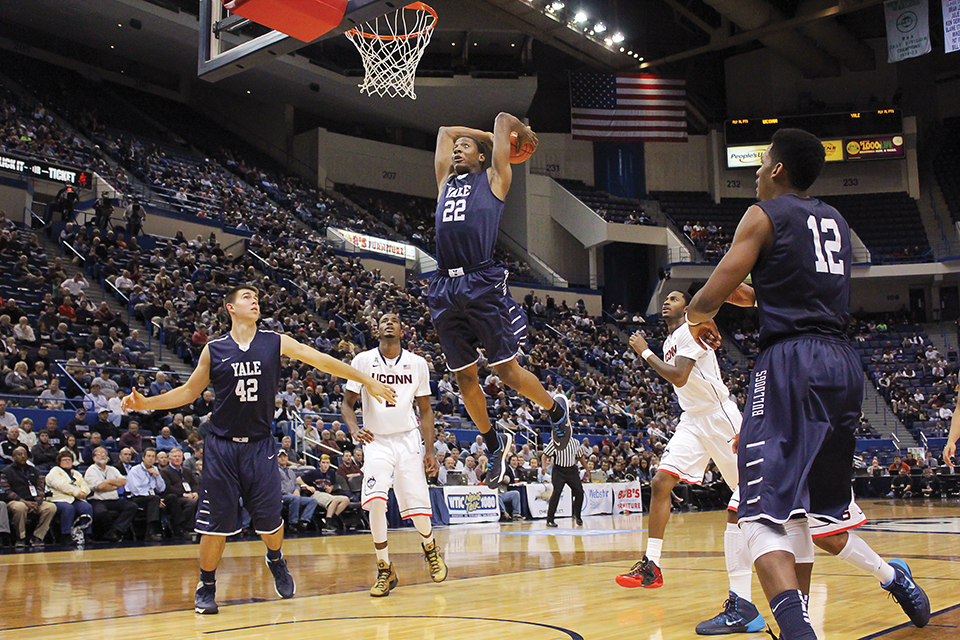 The Bulldogs were the big winners this weekend. Their two impressive wins boosted them to the top of the Ivy League standings, where they now sit tied with Harvard for the top spot. The Bulldogs began the weekend with a great defensive effort against Dartmouth in a 67-54 win. Forward Brandon Sherrod led the way with 15 points, while six other Bulldogs each put up at least five points. The win was head coach James Jones' 200th.

The following night's victory may have been even sweeter though, as Yale handed Harvard its first Ivy defeat of the season. Forward Justin Sears and guard Armani Cotton had double-doubles, with Sears scoring 21 points and going 9-for-10 from the foul line. With the win, Yale ended the Crimson's 20-game home winning streak.

Prior to the loss to Yale, Harvard had notched a win against Brown on Friday night. The 52-45 win was a low-scoring affair for both teams. The Ivy League's leading scorer, Brown guard Sean McGonagill, was held to just eight points.

McGonagill was more effective the following night, as both he and forward Steven Spieth scored 20 points in a 75-62 win over Dartmouth. Spieth earned Ivy League Rookie of the Week for his effort, and the Dartmouth game represents his highest-scoring game to date.

From the other travel group, Penn emerged victorious, securing two wins in front of home crowds at the Palestra. Friday night was a high-scoring, 90-83 affair against Cornell. Penn led 50-32 at the half, and despite a tighter second half of play, the Quakers managed to hold off the Big Red. Guard Tony Hicks racked up 27 points, as well as a career-high seven assists. Guard Miles Cartwright and forward Fran Dougherty also put up impressive numbers, scoring 19 and 17 points, respectively.

The following night, the Penn offense caught fire against Columbia, shooting 68.2 percent in the first half and leading 40-30 after the first 20 minutes of play. Despite cooling off a little in the second half, scoring 28 points to Columbia's 30, the Quakers maintained the lead throughout. They were led by Dougherty, whose 23 points and 12 rebounds earned him his second double-double in as many games. Dougherty was named co-Ivy League Player of the Week, sharing the distinction with Yale's Justin Sears.

Following the 68-60 loss to Penn, Columbia will find it difficult to contend for the Ivy crown.

The weekend had gotten off to a promising start for the Lions with a thrilling 53-52 win at Princeton on Friday. After a lackluster first half, during which the Light Blue shot just 33 percent, the team livened up in the second half. A last-minute three by junior guard Meiko Lyles and a key block by first-year forward Luke Petrasek clinched the Light Blue's first win on Princeton's home turf since 1993.

As the teams hit the midway point of Ivy season next weekend, Columbia, Brown, Yale and Cornell will be at home.

Men's Basketball Around The League