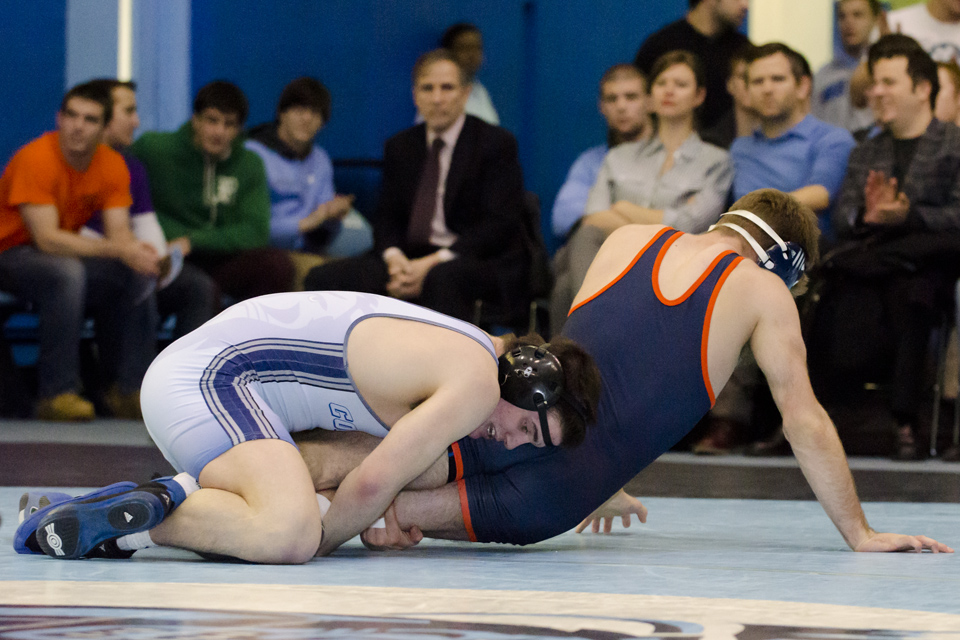 The EIWA Championships yielded six top-eight finishers and three NCAA qualifiers for the Lions, including a conference runner-up in first-year Markus Scheidel at 157 pounds.

Columbia scored 69 team points and placed fifth in the 18-team EIWA, while, as expected, Cornell won the team title with 165.5 points.

"The guys trained really hard all year, they did the right things, they came to compete, so I'm certainly proud of them," head coach Carl Fronhofer said.

Along with Scheidel, senior co-captain Josh Houldsworth and sophomore Zack Hernandez earned automatic bids to the national championships. Houldsworth, who will be returning to NCAAs for the second straight year, placed third at 165 pounds, while Hernandez finished fourth at 184.

Sophomore Angelo Amenta and senior co-captain Matt Bystol finished fifth and seventh at 133 and 141, respectively, outside of their weight classes' qualifying spots.

The second day of competition was frustrating for junior Shane Hughes, seeded second at 174, who struggled with a sprained ankle suffered on Saturday. Entering Sunday with a shot at one of the three automatic bids in 174, Hughes elected to continue wrestling until he had earned a qualification or had been mathematically eliminated.

He was then pinned in the semifinals by Navy's Matt Miller, the eventual champion, and lost a 10-0 major decision to Hofstra's Frank Affronti, which knocked him out of contention for a bid. Hughes forfeited his last match to finish sixth overall.

Scheidel, the seventh seed who upset Cornell's second seed Brian Realbuto on Saturday, continued his dramatic run Sunday with a 3-1 win over third seed Joey Napoli of Lehigh in the semifinals.

In the final, Scheidel faced Boston University's Nestor Taffor, the top seed. After two tight periods, Taffor opened up a lead with a couple of takedowns and went on to win, 8-2. But Scheidel's run to the title bout qualified him for his first NCAA tournament, which did not surprise Fronhofer.

"The kid can wrestle. He's in every match, whether he wins or loses," Fronhofer said. "Was it a great performance? Yeah. Was I completely surprised? No. He can compete with anybody."

Houldsworth, seeded fourth at 165, lost his semifinal match to Cornell's Dylan Palacio. But he dispatched Harvard's Devon Gobbo, 13-5, clinching one of the five automatic bids at 165, and then overcame Penn's Casey Kent in a 3-2 decision to take third place.

The sixth-seeded Hernandez only lost to one wrestler all weekend, giving up identical 6-0 decisions to Brown's Ophir Bernstein on Saturday and Sunday. Before Sunday's bout with Bernstein to decide third place, Hernandez had already clinched his first bid to NCAAs with wins over Army's Ryan Tompkins and Harvard's Cameron Croy.

Despite failing to earn automatic bids, Hughes, Amenta, and Bystol can still make it to nationals. The NCAA distributes four at-large bids per weight class to the best wrestlers who did not qualify through their conference tournaments. Hughes and Bystol, who were ranked coming into the weekend, have good chances to get bids. At-large decisions will come out on March 12.

The Lions who qualify for the tournament will travel to Oklahoma City for the NCAA Championships on March 20 to 22.