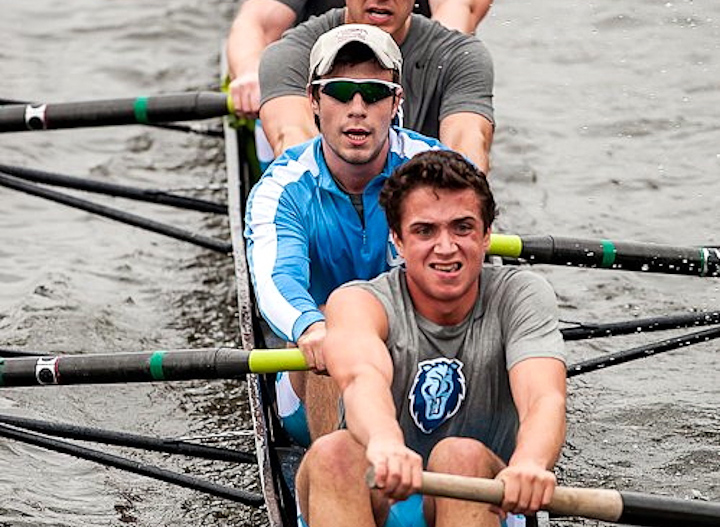 The mens lightweight team captured the WIT Cup last weekend and takes on Yale and Penn this Saturday.

The hectic spring rowing season continues this Saturday, as Columbia's three rowing teams travel to races around the Northeast.

After being defeated by ranked opponents Princeton and Virginia last weekend, the women's rowing team will head to Boston for the Woodbury Cup to compete against Northeastern. The race was established to honor Melanie Woodbury, BC '96, and 1996 co-captain of the Columbia varsity team, who was killed in a 2002 automobile accident.

In the 10 years since its inception, the Lions have taken home the Cup four times. The Huskies have won five times.

Meanwhile, the men's heavyweight team will take on Princeton and Penn in the Childs Cup, held in Schuykill, Pa. The Childs Cup is the oldest collegiate race trophy, and has been a competition between these three schools since 1879.

The April 2 USRowing Collegiate Poll ranked the Tigers at No. 4 and the Quakers at No. 7, with the Lions at No. 16. The Lions are coming off a successful showing against MIT and Dartmouth, though the competition was shortened due to the adverse weather conditions. Princeton defeated Navy in a tight race last Saturday, while Penn's last competition was two weeks ago against Northeastern and George Washington.

The Columbia men's lightweight team captured the WIT Cup last weekend, but had its races against Navy and Princeton disrupted due to the windy conditions. Head coach Nich Lee Parker was pleased with the results and looks to keep improving, noting this week in practice that the team "really talked a lot about maintaining good rhythm in the middle of the races and having confidence going into the second half." The team heads to New Haven, Conn., on Saturday to compete against Yale and Penn in the Dodge Cup.

"This race, the Dodge Cup, is always a challenge," Parker said. "Yale's ranked No. 1 right now and after our race against Princeton, we're ranked second, so I think there will be a lot of eyes around the rowing community on the Dodge Cup this weekend to see No. 1 and No. 2 go at it."

The Lions are seeking a win for the first time since 2003, as Yale has won the race for the past 10 years.

The women start at 7 a.m., while the lightweights will hit the water at 9 a.m. Start time for the heavyweights is 10:40 a.m.