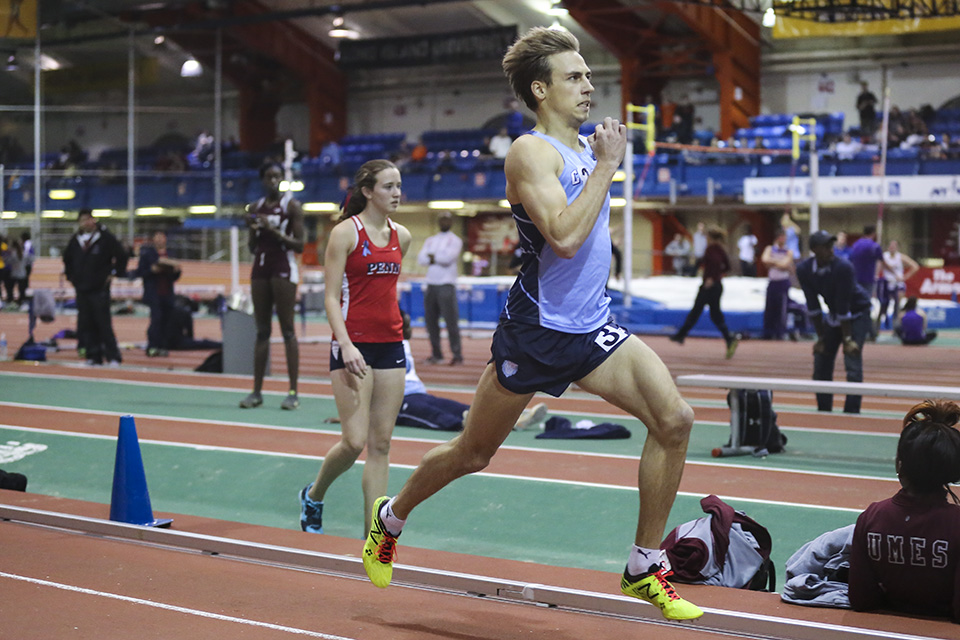 Senior Harrison McFann and the Lions will compete in front of a boisterous crowd this weekend.

There are a few extra incentives for the Columbia runners competing at this weekend's Penn Relays. Fame. Glory. Gold—literally.

Traditionally, the individual winners at the meet—the oldest, biggest competition in the country—are awarded gold watches (relays receive the less flashy, but still coveted, bronze plaques). Columbia's program has its own history at Penn Relays, where a stunning 2007 victory at the meet established the Light Blue as a track power and was crucial in attracting highly ranked recruits.

"It was the first time an Ivy school had won for 50 or 60 years. In a lot of ways that propelled our program forward," head coach Willy Wood said. "A good reason why some people are here right now at this moment is because of what we accomplished on that particular day."

Seven years down the line, Wood is still reminded of the win on a daily basis—a blown-up photo from the meet dominates half of a wall in his office. While Wood isn't necessarily expecting another Cinderella victory, the emphasis on relays provides a time for the squad to come together.

With the exception of the cross country season, this meet is "the closest we get to running as a team," senior John Gregorek said. "The times go out the window. It's really about competing."

Gregorek will run on the distance medley and 4xMile championship relays.  Both the men and women's distance medley relay teams will be in the spotlight, as both ranked among the top in the country in the indoor season.

The men's DMR relay was "fifth in the NCAAs indoors, but with that being said, all four teams that beat us will be here as well—we'll be lining up against Oregon and Stanford. But the team's very confident, they're very fit," Wood said.

The women's team of sophomores Olivia Sadlerand Jaycee Parker, senior Trina Bills, and junior Waverly Neer will benefit from improved fitness and a healthy Neer, who has struggled with injuries as recently as this year. Now ready to compete, she blazed to a 5k victory and school record at the Stanford Invitational earlier this month, clocking the second-fastest time in Ivy history. Injuries pebble the Lions' entries as they ease into the outdoor season: junior triple-jumper Nadia Eke, who has a shot at the podium, competed for the first time last week after an injury at winter NCAAs. Star sprinter Marvellous Iheukwumere will sit out this weekend due to a hamstring sprain.

"We had very high expectations about a week ago for our 4x100 and 4x200 relays," Wood said, "So it [Iheukwumere's injury] lessens our expectation a little bit, but we still feel confident that they can do very well."

In the field, senior Duncan Dickerson, last year's Ivy champ in the hammer throw, is the Light Blue's brightest prospect.

Thanks to the meet's storied status, there will be a substantial crowd.