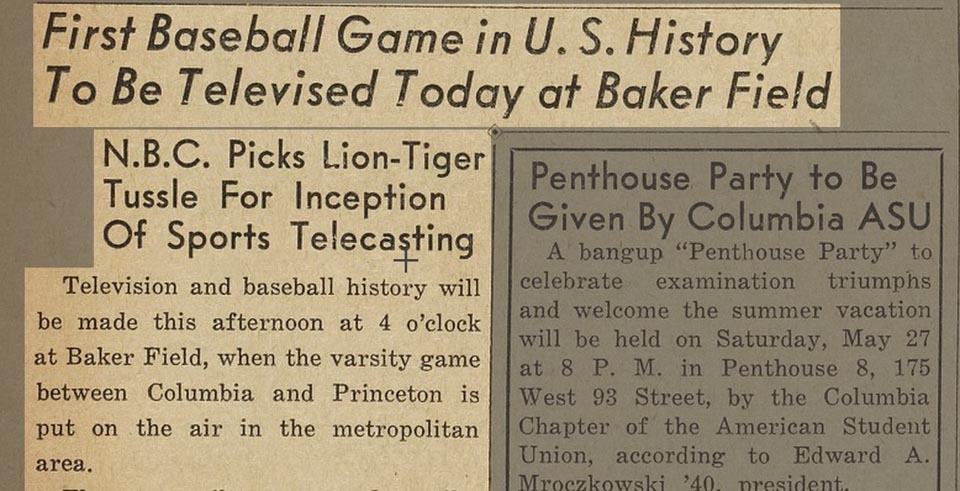 Though the Light Blue didnt come out on top, the televised game between Columbia and Princeton was an important moment in media history.

Baker Field has seen its fair share of historic moments, but one game in particular—a Lions loss—stands out.

The sports world was forever changed on the sunny afternoon of Wednesday, May 17, 1939, when Columbia baseball hosted Princeton for the second game of a doubleheader at Baker Field. The catalyst for this revolution was a single NBC iconoscope camera resting atop a 12-foot wooden stand on the third base side of the field, which shot the first televised sporting event in U.S. history and the first ever televised baseball game.

NBC, which had only begun airing regularly scheduled television broadcasts a week earlier, beginning with a broadcast of the World's Fair in Queens, deployed the only remote camera it had. According to a Spectator article from that day, Baker Field was "partly selected due to the relative absence of tall buildings that might cause interference with the telecast."

Columbia, well aware of the historic implications, commemorated the occasion on its 25th and 50th anniversaries. Dowd, who pitched all 10 innings of the historic tilt, would re-enact the end of the game with Pearson in front of NBC cameras on the silver anniversary in 1964. Dowd also threw out a ceremonial first pitch before a game to mark the golden anniversary in 1989.

As for the broadcast itself, the signal was relayed to a transmitter on top of the Empire State Building and could be seen on about 220 sets in the New York area, most of which were owned by NBC or Radio Corporation of America executives, according to a New York Times article from 1964. The game, called by Bill Stern, was aired on W2XBS, an experimental station, which would later become NBC's New York affiliate, WNBC. As the Times put it in that day's paper, Stern was "assigned to identify players and interpret the play."

NBC's television program manager at the time, Thomas H. Hutchinson, was quoted in the article as saying the broadcast would "signal the beginning of an important development in the art of pictures through the air, for outdoor sports will furnish much of the most interesting material we could televise."

However, in the Times review of the broadcast that weekend, Orlin E. Dunlap Jr. did not agree with that sentiment.

"To sit for two hours in a darkened room on a beautiful sunny day in May to watch a baseball game on a miniature screen stirs thoughts on the future of television in sports," he wrote. "The imprisoned baseball fan becomes restless; his eyes tire. ... The televiewer lacks freedom; seeing baseball by television is too confining, for the novelty would not hold up for more than an hour, if it were not for the commentator."

He added, "What would Christy Mathewson, Ty Cobb, Rube Marquard and those old-timers think of such a turn of affairs—baseball from a sofa!"

In fairness, Dunlap did attribute part of the problem to one camera not being able to properly keep track of the ball and follow the action, suggesting baseball on TV needed at least three or four cameras. This limitation did indeed pose difficulties.

"We prayed all the batters would strike out," Stern said in a Columbia press release on the 25th anniversary of the broadcast.

Although in retrospect the game was a watershed moment in both sports and media history, the magnitude of the event may have been overshadowed by another big baseball story in New York that month. Just 15 days earlier, Lou Gehrig ended his streak of 2,130 consecutive games played. Gehrig, who played for Columbia 16 years earlier, back when the Lions played their games on campus on South Field, retired five weeks later.

But televised sports continued to grow over the summer of 1939. Pleased with its experiment, NBC aired a doubleheader between the Brooklyn Dodgers and Cincinnati Reds at Ebbets Field on Aug. 26. This time, the broadcast used two cameras and featured Red Barber as the announcer.

Baseball, along with many other professional and college sports, is now an indispensible part of the television landscape. Sports have become so intimately linked with television that in the fall of 2013 the NFL alone accounted for 34 of the 35 most viewed shows.

Three-quarters of a century later, it's safe to say that the marriage between sports and television that began at Baker Field in 1939 was more than a fad.