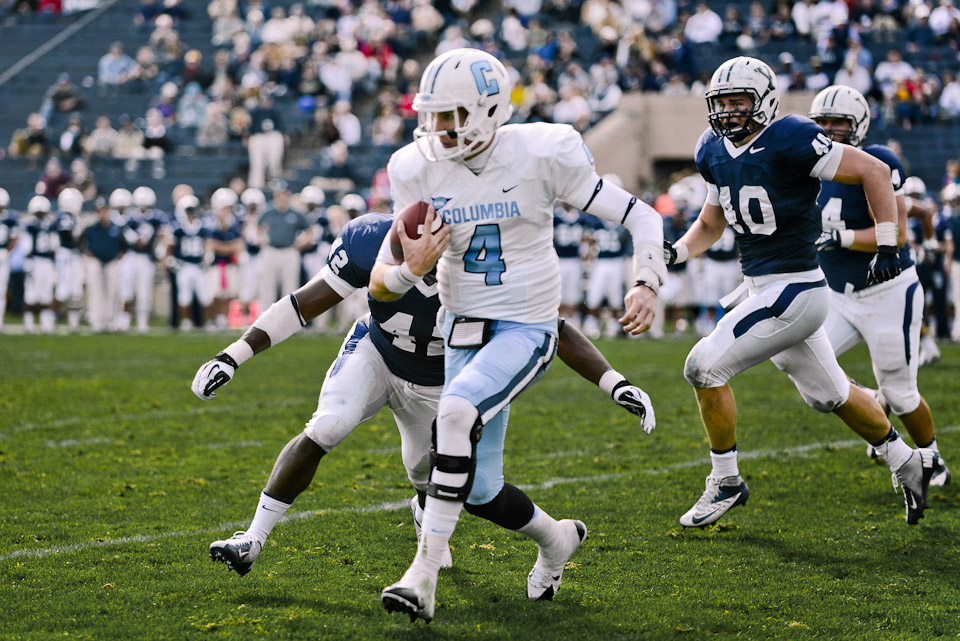 First-year quarterback Kelly Hilinski was part of a Lions offense that was the worst in Division I and averaged the fewest yards per game.

In no uncertain terms, Columbia's 2013 football season was a historic disaster.

From season-ending injuries in the first game, to suspended star players, to calls from alumni to fire head coach Pete Mangurian and Athletic Director M. Dianne Murphy, the Light Blue's first winless campaign since 1987 was the biggest story of the fall season.

The team's grim numbers reflected the tenor surrounding the program in its second year with Mangurian at the helm. In the 122-team Football Championship Subdivision, Columbia finished 2013 ranked dead last in total and scoring offense, and in the bottom three in first downs, rushing offense, and total defense. The Lions put up just 7.3 points per game, with a total of nine touchdowns and four field goals scored on the season. They converted just 110 first downs in 10 games, ahead of only Houston Baptist, which had 106 in seven contests. There is little doubt that Columbia was one of the worst teams in all of college football.

The season started with the hope that junior quarterback Brett Nottingham, a former four-star recruit who transferred from Stanford, would be able to help invigorate the Light Blue offense. The quarterback showed why he could be a star with some strong throws in Columbia's 52-7 season-opening loss to Fordham, but suffered a season-ending wrist injury during the game.

Columbia also lost senior defensive end Seyi Adebayo to a season-ending knee injury, leaving the Lions without two of their most important leaders on offense and defense for the remaining nine games.

"This is an unfortunate, ugly reality of football at any level," Mangurian said in a September statement. "These two young men have worked extraordinarily hard to prepare for the season. I feel for them."

Both units would miss their stars throughout the season, but no position was more scrutinized than quarterback. Mangurian named sophomore Trevor McDonagh the team's starter, and he struggled in the home opener, completing just 12 of his 34 passes for 109 yards in Columbia's 37-14 loss to Monmouth. Still struggling against Princeton, Mangurian benched the sophomore in favor of first-year Kelly Hilinski. The rookie flashed his potential against the Tigers, completing 10 of 21 passes for 132 yards—including a throw to sophomore Scooter Hollis on a crossing route that the receiver turned into a 70-yard touchdown reception.

"It was time," Mangurian said of the decision to put Hilinski into the game. "It didn't work for him [McDonagh] last week very well, and it really didn't work very well for him at the beginning of this."

But the losses kept on coming. Mangurian went back and forth between both quarterbacks in Columbia's 24-10 loss to Lehigh, a game that saw senior running back Marcorus Garrett put up 150 yards on the ground with a touchdown. The head coach then named Hilinski the starting quarterback before the team's Homecoming game against Penn, a contest the Lions would drop, 21-7, despite a strong defensive effort.

"This one hurts. They all hurt, but this one really hurts," Mangurian said after the game. "We've still got to pass through that valley, and we haven't done it yet."

The next few games were lopsided blowouts, with the sixth loss of the season a 56-0 embarrassment to Dartmouth on a chilly day in Hanover, New Hampshire. The Lions played their seventh game of the season without Garrett and senior punter Paul Delaney due to a violation of team rules, and lost 53-12 to Yale in New Haven, Connecticut. Harvard shut out the Light Blue for its eighth loss, 34-0, and the Lions fell 24-9 to a Cornell team playing without star quarterback Jeff Mathews.

Unrest surrounding the program began to boil over during weeks 8 and 9. Amid calls for the removal of both Mangurian and Murphy, University President Lee Bollinger submitted a letter to the editor to Spectator to express confidence in both.

"Frustration is felt most acutely by the hardworking players and coaches who take pride in their efforts and are determined to improve their performance," Bollinger wrote. "I am confident that Pete Mangurian is a coach whose leadership and values will deliver that improvement in the years ahead."

But Bollinger's words did not stop a group from paying to fly a banner that read, "THX SENIORS GO LIONS LUV U!! MANG & MURPHY...JUST GO" over Robert K. Kraft Field as the Lions dropped their final game of the season to Brown, 48-7, to complete the sixth winless season in program history.

Despite the season's ugly nature, after the loss to Brown, Mangurian expressed a determination to build a winning program at Columbia.

"There's a plan in place that's based on empirical data, and a lot of knowledge and observation, and a great team of people that's a lot larger than anybody realizes, working to make this program and these kids successful," Mangurian said.

Having compiled a 3-17 record over the last two seasons, the Lions still have a long way to go in climbing to the top—or, at least, away from the bottom—of the Ancient Eight.