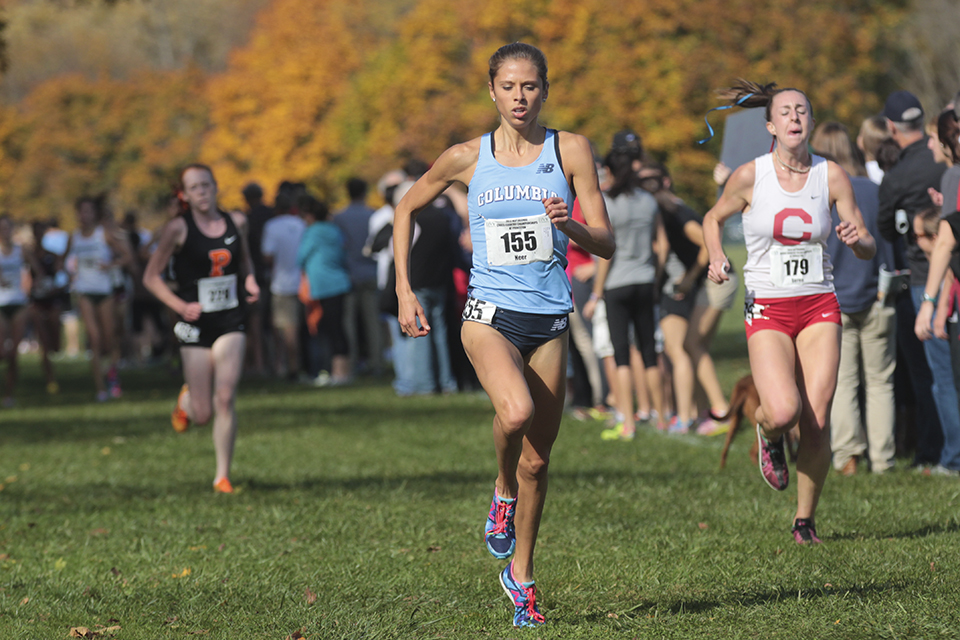 In the beginning was the word, and the word was "terrible."

Women's cross country became an Ivy sport in 1977, and for over 20 years, the Lions either finished dead last or flat-out didn't compete.

Finally, they broke through. Columbia finished fifth in 1998. And after a pair of third-place finishes, the Light Blue entered a golden age, finishing in the top two spots every year from 2002 to 2011, save for a third-place finish in 2009.

So it was in 2011 that Aryn Foland—then a first-year on the team—witnessed a routine silver medal finish, just a fingernail away from the team title.

Then things went wrong. Riddled with injury and other complications, the team has sunk to sixth and fifth in the last two years.

"I don't even know what we've gotten. It's been so embarrassing, I didn't even look at the results," Foland said, laughing a little. "I'm just kidding ... We got second three years ago, then we got sixth and fifth. We're way better than that. Our girls' team's never really put the pieces together—we can never kind of get it done."

Putting the pieces together will be the struggle this year, especially with a brand-new coach and a large gap to fill from the class of 2014. And in perhaps the most devastating blow, All-American Waverly Neer, who was the heavy favorite for this year's Ivy title, transferred to Oregon for her senior season.

That leaves the women with just three returning runners from their top seven—Foland and sophomores Samantha Siler and Pegah Kamrani.

It's a situation that could easily inspire despair, but Foland remains upbeat, especially with the influx of fresh blood.

"We're a very, very young team right now, which is really cool to watch as a senior. People kind of have to step up right now," she said. "It's the time where anyone can contribute. And it's very up-in-the-air, it's very experimental, groups are changing, and you know, people are stepping up who didn't expect to."

With so many open spots at the top, and underclassmen like Siler and Kamrani leading the way, new head coach Dan Ireland says it's the type of atmosphere that helps fuel ambition.

"It's our deal as a coaching staff to make sure to keep these kids excited and getting better and wanting to be a part of this," he said. "And you know, keep the carrot in front of them—the things they dreamed about in high school, college, make sure they don't get sidetracked and forget about those goals."

Two of the newest imports are Grace Grim, who won running capital Oregon's cross country 5A championship as a junior in high school, and first-year Erin Melly, who's kept up with the top of the pack during preseason. Additionally, a breakout outdoor track season last spring has sophomore Henna Rustami raring to prove herself on grass.

"The freshmen might be a little hungrier, they come in and want to prove themselves," Ireland said. "Sometimes the upperclassmen, I tell them they got to be hungry to not get beat by the freshmen."

And while the team may heavily favor youth over experience right now, there's a new cohesion, which will help the team's pack dynamic on the course moving forward.

"We finish workouts together, and we're kind of like, 'Oh my gosh, we just did this five-mile tempo, and we all stuck together, and we've never done that before,'" Foland said. "So I'm excited about it. I mean, I am nervous for the first race but I feel like our focus, I feel like we're closer as a team, and I think the focus is more team-oriented."

While it would take a near miracle to come out of this season with a title, turning over a new leaf bodes well for the future as the Lions shoot for a better finish this year.

"We'd like to compete to win, but we'd like to go up there to run up to our potential," Ireland said. "Once we do that, I think we can have a top-three finish, which is working our way back to bringing the trophy back one year."