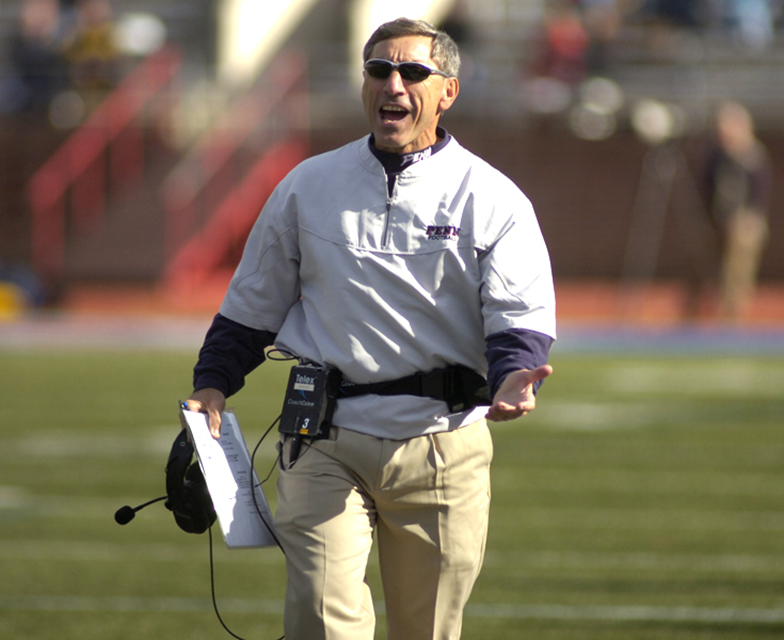 Quakers football head coach Al Bagnoli will retire at the end of the season. Hes led Penn to nine Ivy titles in his two-decade-plus tenure.

Bagnoli will retire at the end of this season after 23 years as head coach of the Quakers football program. His career has been one of the most successful in Ivy League history, as the 61-year-old boasts a career record of 146-76, including nine Ivy titles and four undefeated seasons.

"It's been tremendously enjoyable," Bagnoli said. "I've been blessed to work with some great student athletes for the last 23 seasons."

After a successful stint at Division III Union, Bagnoli arrived in Philadelphia in 1992 to take the helm of a Quakers program that had posted a losing record for three straight seasons and had just gone 2-8. It didn't take Bagnoli long to turn things around.

In his first season, Penn improved to 7-3. The year after, the Quakers went 10-0, securing the first of back-to-back Ivy titles. More than two successful decades later, Bagnoli's reputation and personality still carry weight.

"I came here to Penn because of the program that Al Bagnoli has built here," tight end Mitch King said. "He's a really easy guy to talk to—a little intimidating on the first visit, but he focuses on the right things."

And for recruits like King who chose Bagnoli's program, success has been a virtual guarantee. Between Bagnoli's first season in 1992 and 2012—the last time the Quakers finished atop the Ancient Eight—only two recruiting classes came and went without winning at least one Ivy title.

According to Bagnoli, Penn's success over the last quarter-century has been due to more than just attracting skilled, athletic recruits.

Bagnoli's success has not been lost on his colleagues. Columbia head coach Pete Mangurian has spoken highly of Penn football in the past, and said that there are many aspects of the Quakers' program that the Lions seek to emulate. Despite Penn's 0-4 start this season, Mangurian continued to praise the program the Quakers skipper has built up over the years.

"Penn can still run the football. They have an identity, they're tough," Mangurian said. "They're hard for anybody to beat at Franklin Field."

Bagnoli said there was no singular event that caused him to decide to retire, but added that he is ready to pass the torch.

"I tell people I've had the really good fortune of being a head coach in college since 1982, and so it's been a long time, and anybody who's in the business knows it's a grind," Bagnoli said. "It just got to the point where I felt I've had the privilege of doing it long enough, and just felt it was time for somebody else to take over."

It is unclear what Bagnoli's future holds. He said he has interest in staying involved with the Quakers, but that he doesn't know exactly in what capacity.

"Something in the athletic administration office—that'll be something completely foreign and new to me, but certainly looking forward to it," Bagnoli said.

With only six games of his Quakers career remaining, Bagnoli's players will be looking to move past the rocky start to the season and send off their coach in winning fashion.

"Don't let yourself take things out of perspective,'" King said, quoting his coach. "Like I said before, he really harps on paying attention to detail—not looking too far in advance, focusing on winning today. And that's one of our mottoes here at Penn—Win today.'"

The Quakers have done quite a bit of that over the past 23 years—and if Bagnoli's 19-3 lifetime record against Columbia is any indication, they have a good chance to do a little more before closing this chapter of Penn football history.