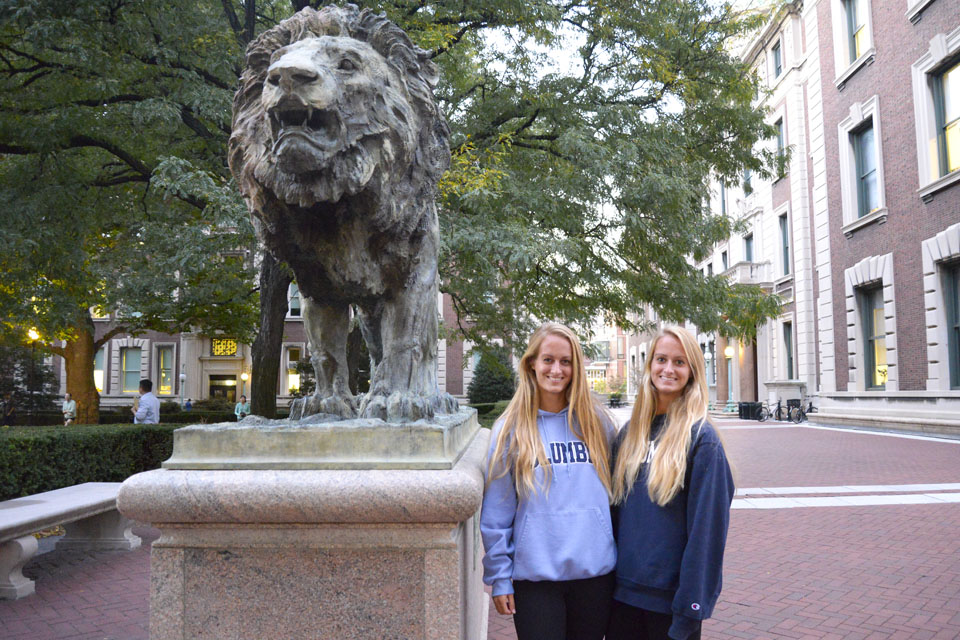 Holly and Natalie Neshat were thrilled to both get recruited to Columbiathey thought theyd have to split up to play soccer in Division I.

Do twins have telepathy?

In sports, many pairs of twins seem to—including Columbia's own Natalie and Holly Neshat.

They look identical to the point that their coaches and teammates can't reliably tell them apart without numbers on their backs. They answer questions at the same time and finish each other's sentences. And on the field, according to women's soccer head coach Tracey Bartholomew, they have an uncanny ability to find each other.

"It's just some kind of instinctual thing that happens with them that you can't train," Bartholomew said in September.

Holly, a midfielder, has appeared in all 13 games for Columbia this season, making seven starts. Most recently, she tallied her first college goal in Columbia's 1-0 win over Princeton on Saturday, earning Ivy League Rookie of the Week honors. Her sister Natalie—a forward-turned-defender—didn't play a direct role in the goal, but played the entire 90 minutes on the back end in her ninth start of the season.

The first-years acknowledge their chemistry on the field, which, they say, comes from years of experience playing together.

"We know our style really well, so I know where she's going to run and how she wants to receive the ball and stuff like that," Holly said. "So I think that makes it easier and doesn't necessitate as much communication as I might need with other people."

Holly and Natalie grew up in San Diego, where many people play soccer as kindergartners in house leagues. Early on, they had the bonus of being coached by their dad.

"I guess he has kind of kept us motivated and into it. He's someone we always ask advice about plays," Holly said of the twins' father.

The sisters did not only play soccer growing up. They also played volleyball and ran track.

"There was definitely more passion and intensity that I applied to soccer," Natalie added.

And their love for soccer only continued to grow. The ultimate goal for both girls, athletically, was to play at the Division I level. But they didn't want to sacrifice academics to do so. Given the tough college recruitment process—as much as they hoped to stay together and play—they knew a package deal just wasn't likely.

That is, before Bartholomew called—and wanted both of them to play at Columbia.

"This was the culmination of what we both wanted," Natalie said.

So far, both sisters said they've enjoyed their experience. As suitemates, in addition to siblings and teammates, they agree that having each other has eased the transition to college.

"We are very independent people but we are also, in some ways, dependent on each other," Natalie said.

They say there's no real inner rivalry—just a healthy competitive spirit. At Columbia, they said they've consciously tried to stay separated—they already know each other's style of play and want to develop chemistry with their other teammates.

But their teammates and coaches are more than happy to put them together, whether to compete against each other in practice or together against another team in a game.

"Having one good player is a great thing, but then when they're twins you get two of the same genes and everything like that," Bartholomew said. "They're incredibly hard-working athletes, and they put in a lot to the program in such a short period of time."

Telepathy or not, there is no doubt that their experience of playing together for so many years has provided them with an advantage on the field—an edge that looks like it'll benefit Columbia until they graduate.

"One of hardest things to figure out is who is who, which definitely still fools me to this day," Bartholomew said. "But once they get playing and they're moving, you can kind of tell a little bit more about who they are."