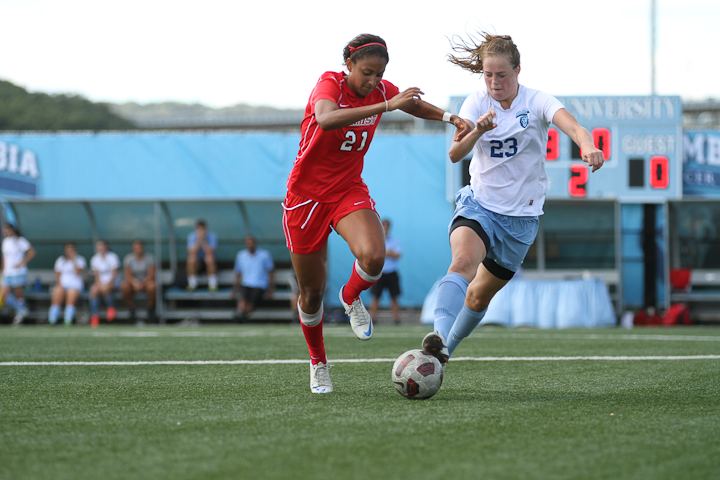 The departure of senior forward Coleen Rizzo, who led the team in goals in 2014, will make things difficult for a Lions team that already had trouble putting the ball in the net.

A disappointing end to Ivy play overshadowed a season that began with the women's soccer team challenging for the top spot in the Ancient Eight.

The Lions ultimately finished sixth in the Ivy League, winning just one of their final four conference games. Still, in head coach Tracey Bartholomew's first season, Columbia emerged with arguably its best defense ever. The Lions (7-4-6, 2-3-2 Ivy) ranked 15th in the country with a goals-against average of .600, and they set a program record for fewest goals allowed with 11.

And all that success came with first-years making up three-fourths of the Light Blue's back line—fullbacks Hollie Neshat and Natalie Ambrose anchored the right and left flanks, respectively, and Kerry Manion thrived at center halfback.

"Defensively, some of those young players got opportunities because some of those returning players got hurt—plain and simple—and they made the most of them," Bartholomew said. "We were able to kind of bring the team together and organize a defensive unit, including the back line."

Bartholomew also credited much of the defensive success to veteran center halfback Cadie Naquin. A junior, she was an organizing voice for the three first-years and a vital offensive weapon on set pieces as well.

The latter distinction for Naquin underlines another theme from the season—a frustrating inability to score goals. Beyond senior forward Coleen Rizzo, the Lions managed just 12 goals across 17 fixtures.

"In terms of scoring goals, I do feel that we were on a pretty good track," Bartholomew said. "We would have scored more goals, I think, had some of our more experienced players been healthy."

Specifically, the trio of senior forward Alexa Yow, senior forward Phoenetia Brown, and sophomore winger Grace Taylor missed significant time with ACL injuries. Barring any setbacks, Taylor expects to return for her junior season and help revitalize a struggling attack. Brown, meanwhile, faces the decision over whether to return for another opportunity to end her career on a more positive note.

"She tore her knee before her freshman year. There is an outside chance, but with the Ivy rules you have to take a semester off, so it complicates it. We'll kind of see. I don't know if Pho will or not," Bartholomew said of Brown.

Yow does not have that option. She—along with Rizzo—will graduate in the spring, which leaves the Lions with questions on the offensive side. The incoming class of first-years will need to take an active role on the attack in order to help make up for these departures.

Bartholomew added that in the future she also may consider other formations besides the Lions' standard 4-3-3.

"We have to attack as a group. We've played out of a 4-4-2 with a diamond midfield and had some success with that," she said. "Our goal will be to try a number of different systems. We need another system in our belt to have a good season next year, but we're losing 10 players, so our incoming class has to come in and fill some shoes."