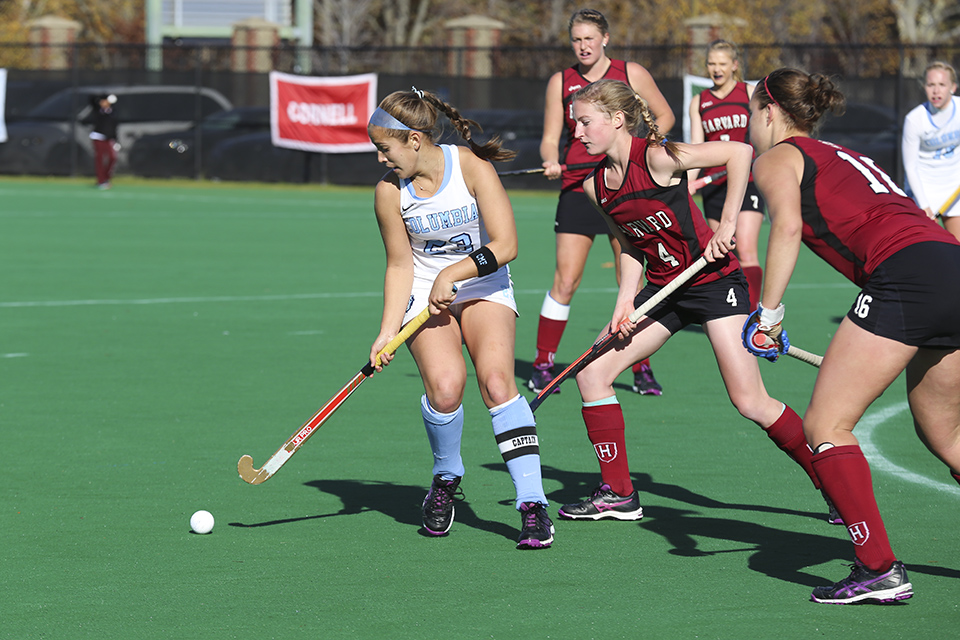 Junior Christina Freibott had a record-setting year, leading the nation in assists en route to being named a third-team All-American.

Although the field hockey season ended in early November, the accolades haven't stopped pouring in for junior Christina Freibott. In addition to finishing as the national leader in assists per game, the midfielder was named Ivy League Offensive Player of the Year and was selected to the National Field Hockey Coaches Association All-Mideast Region First Team.

"I was surprised to be selected," Freibott confessed.

But those who spent time watching her at work at Columbia Field Hockey Venue this fall are not so astonished.

"What they don't show ... is her tactical knowledge of the game, her awareness of situations, and her willingness to make the play," Freeman said.

Freibott's hockey IQ crystallized into many moments of offensive brilliance in 2014.

In mid-October against Penn, Freibott kept the Lions in the game early, drawing fouls and scoring on a penalty stroke and penalty corner. With 1:39 remaining in the game, the Lions were behind 3-2, but Freibott came through again, netting her third goal to send the game into overtime. Freibott seized control of the ball moments into the extra frame and connected with sophomore forward Katie Ruesterholz for the winning goal.

The contest was representative of Freibott's impact on the team—a player who can pull the trigger if need be, but thrives on finding an open teammate.

"I aim to be able to set up all of our goal scorers so that they can have goals in crucial moments of the game and ultimately come out with wins," Freibott said.

"Given my position, I am the sort of facilitator on the field," Freibott said. "From that first weekend win over La Salle, we progressed as we went onwards. We improved our play into such a high level of field hockey that it became fun."

"She's the catalyst, the facilitator, the one in control—but she's also something more," Freeman said. "She's the teacher."

Freeman noted that Freibott's knowledge of the game allows her to essentially be an on-field coach, reading the opposition's setup and knowing where her teammates should be.

The Lions' impressive 2014 season culminated in 12 wins—a program best—but the Light Blue fell in its final regular season game against Harvard, ending its dreams of a first-ever Ivy League title.

Freibott accepts the sting of the sour ending, but has already refocused her energy towards the 2015 season.

"Next season, we'll be looking to put the pieces together a little bit more," she said. "What's most important is that we look to build off of where we ended this year, and I am excited to see where that takes us."

But Freibott and the Light Blue face a couple large obstacles next fall. Two of her top targets, midfielders Zoe Blake and Kyle Marsh, will both graduate in May. Blake's 13 goals led the team, and Marsh's nine assists ranked second behind Freibott.

"The loss will definitely affect our corners," Freibott said. "Kyle was the insert, and Zoe was the primary hitter, and that was something that was a great strength for us this year."

The Lions relied heavily on the dynamic corner unit this year. Columbia scored 26 of its 51 goals off penalty corners—by far the highest ratio in the Ancient Eight.

Freeman, however, isn't too worried because Freibott should keep the team rolling along.

"Christina will make sure those around her will step up on our set pieces," Freeman said. "Christina and her teammates set each other up for success."

For now, Freibott is already itching for another shot at an Ancient Eight title, and when the season rolls around, Freibott will be back at work.

"I'll do everything in my power to help us get there," she said.