YOUNG: Taylor meeting a sign of progress for football program

YOUNG: Taylor meeting a sign of progress for football program 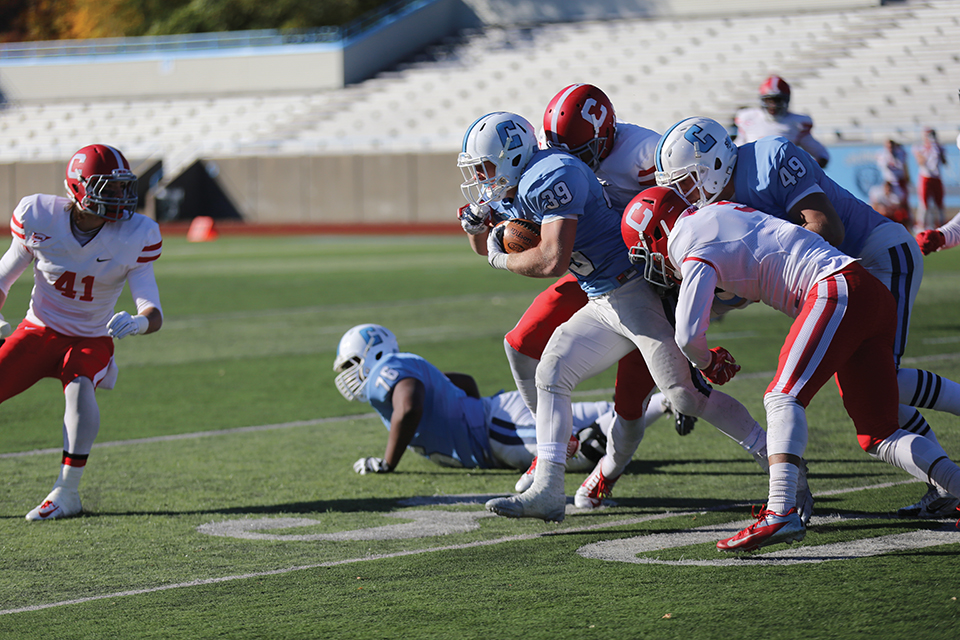 Rick Taylors findings in his investigation into the football program will serve the Lions well in the future.

In recent years, Columbia football has dropped the ball—on many levels.  But while yesterday's forum on Columbia football does not necessarily mean we'll see immediate change on the field, it did indicate that the message was received. For all the discontent that has been leveled at the athletic program in recent months, Rick Taylor's review of Columbia football was absolutely a step in the right direction.

I had not been to Faculty House since Pete Mangurian was hired three years ago, and besides the obvious reasons (the event's purpose), things felt different this time. The speakers—University President Lee Bollinger, consultant Rick Taylor and incoming Athletic Director Peter Pilling—all seemed to be sincere and candid. Most importantly, there was an admission of the serious problems surrounding the football program.

Taylor confirmed that the students on this year's team were divided—in various ways—and that Mangurian only exacerbated that tension. Taylor then noted a lack of emotion on the field and how students felt like "orphans" during their frequent bus trips. Furthermore, he stated that playing Fordham, as many would surmise, is a tremendous detriment to the team.

But Taylor's solution for many of the other tangible problems surprised me. It is, simply put, more money. It now seems that Columbia will make a larger financial commitment to football, especially in regard to compensation of the coaches. A salary boost--commensurate to the living expenses of New York City--would draw higher-quality coaches, which is necessary to compete with the other Ivy programs.

It is a little disconcerting that Taylor also called out alumni as part of the problem, citing a lack of donations. It is tough to place the burden on loyal Columbia graduates when they are donating on blind hope—especially in light of recent years (and decades).

The endgame for the turnaround is recruiting higher levels of talent. But when the majority of Ivy teams are going after the same recruits (which Taylor explained is more the case now than ever due to the Academic Index), Columbia is simply at a disadvantage because of the state of its program. It can change, but it will be a long process. Taylor even admitted that the team may be unlikely to win a game in 2015, and that there is not one clear method to improve the quality of recruits.

To that end, I still am skeptical that Columbia can ever have an elite football program. But, as I have commented in the past, I am fine with just a competitive one. The issues that the football program have caused Columbia at large—both the University and the athletic program—far outweigh the potential benefits of an 8-2 football team.

Taylor compared this situation to how he was able to help turn around Northwestern's program—and its apathetic fans—and ultimately reach the Rose Bowl in 1996. I can guarantee Columbia is not returning to the Rose Bowl. Ivy League football is still mostly an exhibition.

Columbia needs its football team to become a source of school spirit—that's it. Men's basketball can lead us to the promised land.

Thus, I am content with the steps Columbia is taking. The old regime failed to communicate information time and again—which can be attributed to the previous head coach and the general chaos that surrounded the team. The new regime—with a new head coach and Pilling at the helm—appears to be different. I believe Pilling will handle the head coach search well and I applaud Columbia for both conducting the review and addressing it publicly.

Taylor didn't offer any hint on Wednesday as to who the new head coach would be. Some have suggested that former Penn head coach Al Bagnoli is a candidate for the head coaching job. True or not, this proves that Columbia has set up the position to be as attractive as possible and effective reform is on its way.

Eventually, the Lions will break a 30-something game losing streak, and hopefully we will be able to celebrate larger achievements in the future. It is unclear exactly what lies ahead. Nothing is ever easy for Columbia football.

But Columbia is beginning to take control with a commitment to listen to all recommendations and input more resources. It is clear that the University realizes the severity of the situation for its athletes, alumni, and fans. For all the program's flaws, this presents reason for optimism.

Ryan Young is a Columbia College senior majoring in economics-statistics. He is the sports director for WKCR. Roar Ryan Roar runs biweekly.