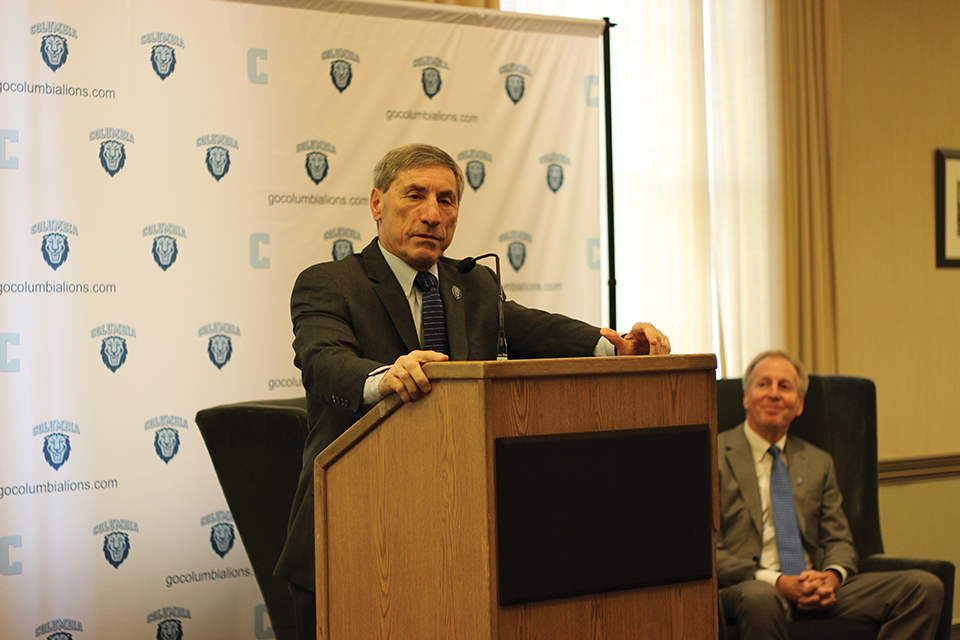 Ever since it was announced that Al Bagnoli would come out of his short retirement to head the ailing Columbia football program, Light Blue fans seem to believe there is a reason to rejoice.

Bagnoli was formally introduced as Columbia's new head coach by University President Lee Bollinger and Athletic Director Peter Pilling at a press conference held last week at the Faculty House. Those at the event—current players, fans, and alumni—welcomed Bagnoli and were enthusiastic about the prospect of prosperity.

The announcement of the hire sent the Ivy League football world abuzz. A hyperbolic column  was published in The Crimson, and Spectator published an op-ed penned by former Daily Pennsylvanian Sports Editor Steven Tydings last week.

Brandon Copeland, a former Quakers linebacker who won three Ivy League titles under Bagnoli, said that Penn alumni are excited to see Bagnoli step back into the role he loves, even if it is for another team.

"I've heard a lot of former players say they'll root for Columbia every week besides the one they play Penn, because we want to see our coach do well," he said. "They want to see them have success because he's had such a positive impact on their lives."

But no one is more enthusiastic about Bagnoli than Columbia's invariably vocal football alumni.

Sean Brackett, CC '13, who quarterbacked a Light Blue squad against Bagnoli's Quakers, said Bagnoli can have an immediate impact because of his winning mentality.

"Whenever you play a team coached by Bagnoli, you know they're going to be smart, tough, both physically and mentally.... They're always competitive from the first quarter to the fourth quarter. They're always going to have those guys ready to play," he said.

But some are a bit more dubious.

Des Werthman, CC '93, who has long been critical of the program's direction and asked for his name to be removed from the Columbia Athletics Hall of Fame in November 2013 due to the state of the program, said that while he is happy about the hire, there is still a lot of work to be done to morph the program into one that can get some wins.

"Those are steps in the right direction," he said. "And there's obviously other things that have to be taken care of over time. I don't want to see a really good hire, and then people, whomever they may be, renege on promises on the direction we're going. It's a positive first step, but there are many other steps to follow."

Alumni are split on whether or not the addition of Bagnoli will bring rapid success to the football program, who has characteristically coached winning teams. Many believe that it will still be difficult for Bagnoli, who, in his worst season with Penn, only dropped four games, to get a win next season.

Because of his late hire date, Bagnoli will have to get Ivy League waivers in order to conduct any off-campus recruiting this year. Additionally, the assistant coaches he brings into the program will not have a lot of time to implement their systems. An announcement regarding his plans to fill the empty spots on his coaching staff is expected soon.

"This is a battleship that's been going the wrong way for 50 years," Werthman said. "It's going to be hard to turn it around overnight.... It takes time to get recruiting classes in, it takes time to get the team gelling with the offense he wants to put in and the coaches he brings in."

Others, such as Marcellus Wiley, CC '97, who went on to become an all-pro defensive end in the NFL, thinks there is no reason it should take long to turn things around.

"I'm looking forward to a fast transition. I'm not the guy who says this is going to be a five-year plan," Wiley said. "I think you get people in there with a like mind and real goals, and it'll be time to go to work."

While disagreements persist among alumni and fans regarding specifics, there is one thing they all seem to agree on: Things are moving in the right direction.

"We have set the stage to do something bigger than normal," Wiley said. "And it's time to make it work."