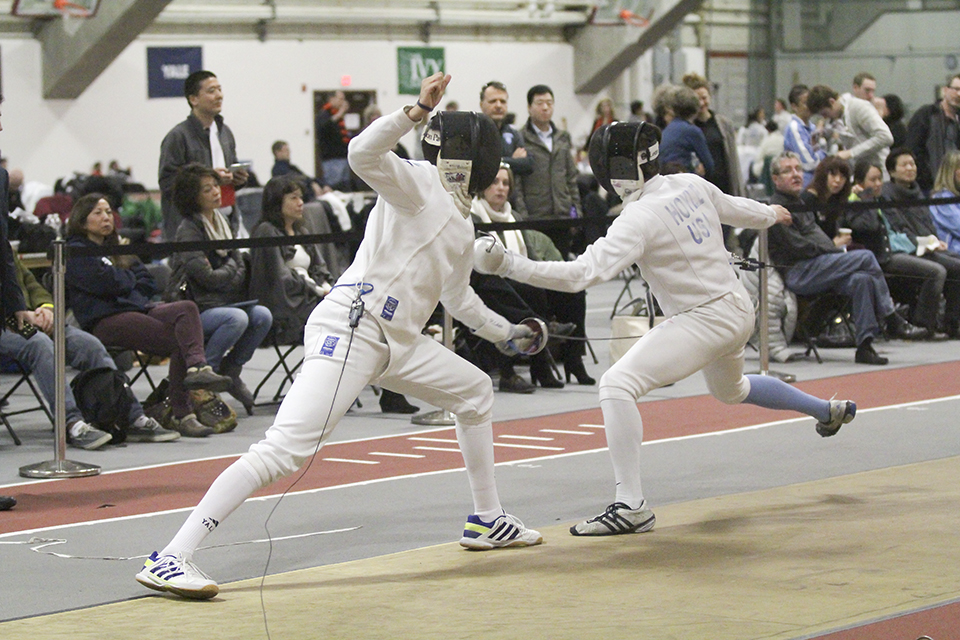 Épéeist Jake Hoyle earned his first NCAA individual championship as well as All American first-team status in an epic ending to his junior season.

March Madness took on a whole new meaning this weekend as the Columbia fencing team claimed the 2015 NCAA National Championship. This marks the first national team title in over two decades for the Lions, and the first with head coach Michael Aufrichtig at the helm.

"I had a plan four years ago, and it was to bring the championship back to Morningside Heights, and here we are," Aufrichtig said after Sunday's final bouts. "It's just amazing. The entire team fenced their hearts out, and—at the same time—we were prepared."

Though in second place upon the close of the men's competition on Friday, the Lions rallied back to take the top spot with 165 points—nine ahead of Notre Dame and reigning champion Penn State. Men's epee and women's saber led the way in points for the Lions with 34 for each division.

The championship came to the tune of nine All-American honors, the most the team has garnered in eight years. Among those All-Americans were rookie saberists Lena Johnson and Anastasia Ivanoff, who posted impressive top-ten performances in their first appearances on the big stage.

Perhaps the most impressive showing of the weekend came from Jake Hoyle, who earned the men's championship title in épée. The junior went 19-4 on the weekend, with three of his four losses coming down to close 5-4 results.

Hoyle's effort earned him first-team All American status, but not before facing off teammate Brian Ro in an intense semifinal bout.

"Brian and I have fenced each other countless times, and it's always very even," Hoyle said. "It's split fifty-fifty, so I knew it was going to be a really good bout, and I knew we were both going to fence as hard as we could."

Top-seeded Hoyle went back and forth with Ro—a fellow classmate—and found himself on the losing end of Ro's 13-12 lead with 15 seconds remaining. Hoyle tied things up off an attack, and went on to take the winning point in an extended victory to secure a spot in the championship bout.

"Obviously, I'm happy that I won, but I'm also very happy that we just got this great bout in the semifinals together," he said of his teammate.

Hoyle found himself against fellow Ivy fencer Jack Hudson of Princeton. The two had faced off earlier in the weekend with Hoyle winning soundly at 5-1. After leading throughout the bout, Hoyle took it on a 15-10 decision for his first NCAA title.

"I got up early, and I went up 5-1," Hoyle said of his strategy. "And from there it was more a waiting game, playing it safe and making sure I didn't do anything too risky to make sure I kept that four-touch lead."

In addition to a third-place finish in épée, Ro garnered first-team All American honors for his 15-8 performance. On the women's side of épée competition, sophomore Mason Speta went 13-10 for eleventh place and All American status, with first-year Katie Angen placing 18th.

Margaret Lu wasn't about to let the intensity die down as the championships came to an end on Sunday. After a 19-4 weekend, the junior knocked off No. 2-seeded Alanna Goldie of Ohio State in the foil semifinals in a close 15-14 bout. However, Lu was left to face the two-time reigning foil champion from Notre Dame—Lee Kiefer, who Lu had faced before in her career.

"We grew up together," Lu said of Kiefer. "We've been fencing for a long time, and our bouts are always pretty close, back-and-forth. She's gotten a lot stronger in general, and me as well, but she's very accomplished on the world stage."

After sticking to a tough bout, Lu fell to Kiefer in a 15-13 decision. Her effort earned her a silver medal in her first-ever NCAA tournament appearance.

"I definitely wanted to do better and win, obviously, but I fought a good bout," Lu said of the foil championship round. "I had a game plan and stuck to it pretty well, just not at the end."

Fellow junior foilist Jackie Dubrovich joined Lu with an All American finish after going 15-8 on the weekend.  Two more All Americans were found in junior foilists Harry Bergman and Adam Mathieu, who finished in 5th and 12th place, respectively. Senior saberist Will Spear ended his career in Light Blue with a 17th-place finish alongside junior Geoffrey Loss, who placed 14th after a 11-12 weekend.

Columbia's win marks the fifth different national champion over the past five years. Despite the ever-changing tide in college fencing, Aufrichtig said he wants to get his team back to this point next season.

"We've got a lot of juniors who are coming back next year, and some sophomores and freshmen who were in it this year," he said. "We've got some great recruits coming in, and the goal next year is to go back and do it again."

Ending the 2014-15 season with dual Ivy League Championships, an NCAA title, and No. 1 rankings for both men's and women's teams—despite what next season brings—it is safe to say that Columbia fencing is at the top of its game.