A new rule: How Columbia fencing rose to the top

A new rule: How Columbia fencing rose to the top 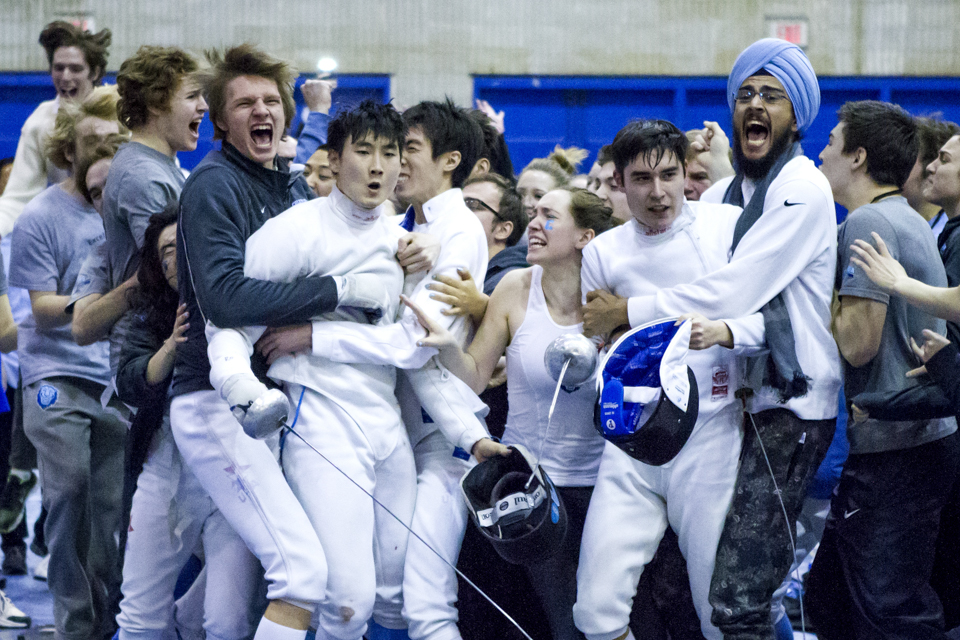 The 2014-15 season saw a host of honors for the Columbia fencing program, including Ivy League titles for both mens and womens teams.

That is what junior épéeist Jake Hoyle recalls being told by the still new Columbia fencing head coach three years ago, when the prospective recruit was considering joining the team.

Given the program's recent success, that promise does not seem overly ambitious. However, the Light Blue fencing program's dominance was far from assured when head coach Michael Aufrichtig took the reins in 2011. That season, though the women's team finished second at the Ivy League Championships, the men went 2-3 to tie for third, and the team finished eighth overall at NCAAs.

Fast-forward to 2015, and the Lions have brought home both the Ivy crown and the NCAA Championship—with Hoyle earning the national men's épée title.

Hoyle is part of a junior class that features the first crop of fencers recruited by Aufrichtig, a business school graduate and former college fencer. Although Aufrichtig has an admittedly unique recruiting style, he has brought together a winning combination of talented fencers.

Understanding the current success of Columbia fencing requires not only an exploration of the changing composition and attitude of the team, but also a little background on its maverick coach.

Aufrichtig first picked up a sword in his first year of high school at Northern Louisiana's Caddo Magnet High School without any knowledge of its sport.

"Fencing? Is that with the swords?" the future women's épée world team coach asked.

But after two years of training and exposure to national level competition, the young épéeist knew that he had to put his dream of becoming an Olympic marathon runner on the back burner for this new passion—fencing.

After Aufrichtig met future Columbia volunteer assistant coach Wesley McKinney, the two started attending camps and watching fencing tapes in order to improve their skills. Upon qualifying for his first Junior Olympics in Orlando, Florida, Aufrichtig noticed that the major collegiate programs, especially those on the East Coast, were well-represented in the final round.

"I saw all these people at the top from schools like Columbia, and there was a guy from New York University, and Penn State, and Notre Dame—but I noticed that there were a lot of people from New York in all the weapons," he said.

With the release of the 1987 film "Wall Street," Aufrichtig found himself inspired by Michael Douglas' Wall Street tycoon character. He knew that New York was where he needed to be for both business school and his athletic career.

"That's what brought me up to New York," he said. "I wanted to be Gordon Gekko. Business and fencing."

A degree in marketing from NYU's Stern School of Business pushed Aufrichtig into a career in brand management and fundraising, but fencing remained an integral part of his life, as he continued to fence on the international circuit and place in the top-12s of the North American Cup. In 2007, Aufrichtig was named chairman of the New York Athletic Club fencing program, a volunteer position to which he dedicated upward of 30 hours a week for five years.

Despite balancing his career with his athletic interests, Aufrichtig still held onto the goal of earning enough money to fence full-time. Little did he know that his dream would be realized, albeit in a coaching capacity, at an Ivy League university just a few miles up the road in Morningside Heights.

Now in 2015, with a national title under his belt, one can easily see that Aufrichtig has not stopped blending his two passions. Each of this year's nine Light Blue All-American fencers is a product of one of Aufrichtig's three recruiting classes. His ability to apply statistical analysis to the arena of fencing has led some to view his recruitment tactics as a "Moneyball" approach similar to that of Major League Baseball general manager Billy Beane. 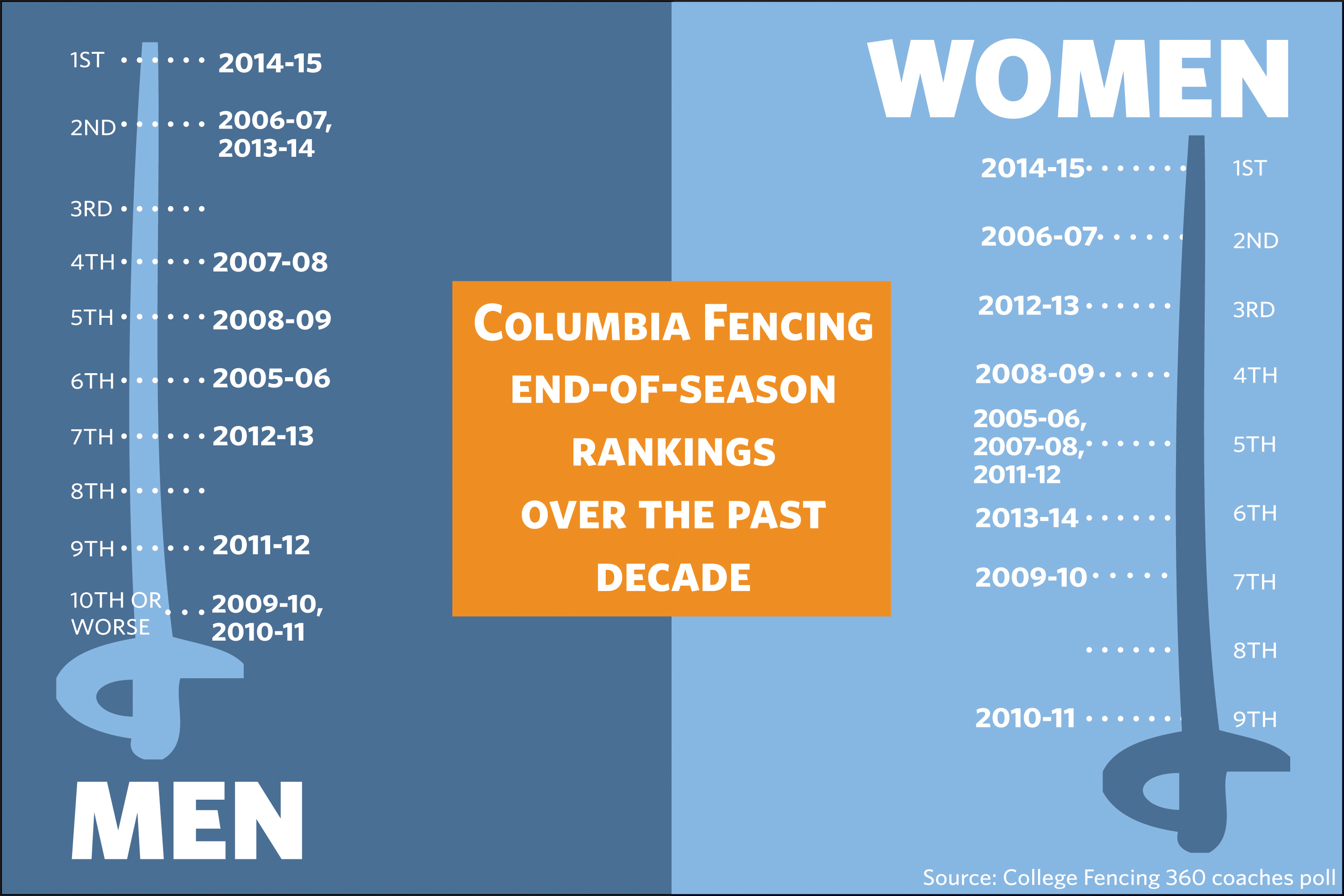 "I could definitely tell that he was one of a kind the first time I met him," Hoyle said of his coach. "I'd met with a lot of other college coaches but when I went and talked with Mike, we sat down and he had maybe 20 pages of my results from the past four years, and all kinds of things were circled and highlighted."

That note-taking reflects the intense attention to detail Aufrichtig brings to his role and is a result of years of analyzing and researching what makes a college fencer great. The roots of his analytic approach can be found in his trips to the Louisiana Downs Horse Track with his parents, where he would try to pick the winning horses.

"I would go back and look at past history, and circle different things—were they on grass, were they on a turf, was it slippery, was it not? I'd really get down on the details," Aufrichtig said. "I did the same thing for fencing where I'd look at past performances, but first I'd look at the big picture. In horse racing, you look and see where they were at certain furlongs. So for fencing, I look at their ultimate number."

This ultimate number—a composite ranking based on precollegiate results—gives an overall picture of a fencer's final performances at tournaments. However, what sets Aufrichtig's style apart is his deeper analysis of the five-touch bout performances that occur in the preliminary rounds, an approach he calls "just mastering the obvious."

While most tournaments are 15-touch bouts, collegiate fencing is first-to-five.

Aufrichtig gave a TED Talk last year that explained the importance of this oft-overlooked statistic in recruiting. He spoke about current sophomore foilist Drew Johnston, whose stellar five-touch record caught Aufrichtig's eye and who has thrived at Columbia, most recently finishing fourth at the NCAA Regionals.

"I'd say Michael's a little bit more willing to take risks than the average coach and go with kind of unconventional people who are a little bit outside the norm for fencing, but are still getting pretty good results," Johnston said.

By focusing on recruiting individuals that can thrive in a collegiate setting, Aufrichtig has been setting the stage for a national title since his first class arrived to the Light Blue strips in the 2012-13 season.

"He's very good at predicting what we're capable of and very good at doing what he can to make sure it happens," Johnston said. "I don't really think if you'd asked anyone in the fencing world four years ago, 'Who's going to win them [NCAAs] in four years?' they would have said Columbia."

Aufrichtig hasn't just been responsible for recognizing and recruiting world-class fencers, but also for retaining world-class coaching. Dr. Aladar Kogler, one of the fencing world's most significant contributors to the sport, served on the Columbia coaching staff from 1983 until he announced his retirement in 2011.

A four-time coach for the United States Olympic fencing team and USFA National Fencing Hall of Fame member, Dr. Kogler has been widely recognized for his coaching tactics that focus around mental concentration. At the age of 83, he can claim responsibility for more than 20 Olympians, as well as 10 books on sports psychology. Realizing the incredible loss Dr. Kogler's absence would be to Columbia's program, Aufrichtig made it a point to get him back.

Now back with the Light Blue, Dr. Kogler conducts individual lessons with fencers like Hoyle and junior foilist Margaret Lu, who were Columbia's top finishers at this year's NCAA Championships.

"If that isn't Mike's crowning achievement so far, I don't know what is," Hoyle said of Dr. Kogler's return to the team. "I owe the success to Aladar for making me better, but without Mike Aufrichtig, Aladar wouldn't even be here." 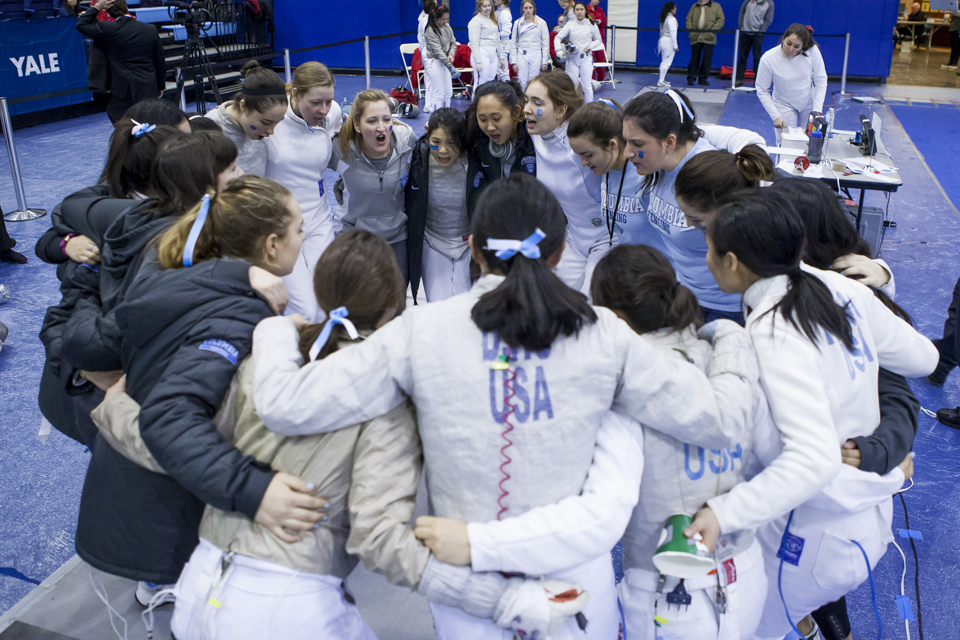 Building solid recruiting classes and compiling a coaching staff to match were just a few of the goals Aufrichtig had upon his arrival at Columbia, and he continues to perfect the program. Jackie Dubrovich, a junior foilist who earned an individual bronze medal at last year's NCAA Championships, said the recruiting classes were instantly exposed to Aufrichtig's enthusiasm for successful team—not just individual—performances, which has contributed to an improvement in Columbia's showings at the Ivy League Championships.

"I think that's just trickled down to the overall feeling of the team," Dubrovich said of the evolution to a more team-based mentality. "People are motivated, people truly care about the team's results versus just their own individual results and I think that was something that was holding us back before."

The concept of teamwork, though difficult to fathom with an individual sport such as fencing, is one that has thrived under Aufrichtig's reign due to multiple team practices during the week, a new mindset, and new regulations.

A regular season record of 18-6 for the men's team and a nearly spotless 26-1 tally for the women marked a historic year as both teams finished No. 1 in the country. This marked the first time in the 14-year history of the CollegeFencing360 Coaches Poll that the Light Blue men's squad has garnered the ranking, while the women rebounded from last year's No. 6 finish.

With a 2015 national title and both Ivy championships added to the shelf, Columbia fencing has reached the peak of a decade-long climb. However, the crown does weigh heavy, bringing with it the pressure to maintain the standard of excellence with which Columbia fencing has now become associated.

The question now becomes what the Lions must do to remain the royalty of collegiate fencing. This challenge is something that Aufrichtig said he already addressed with the team at its last practice.

"I said, 'If anyone is content winning an NCAA championship and an Ivy League championship, now is your time to retire. Just do it, because this is the top, this is it,'" he said. "'But, for all the other people that want to take the journey of coming back and repeating it, there's going to be a lot of pressure, a lot of high expectations. If you want to take that journey, then get ready for a lot more work.'"

Aufrichtig noted that continued excellence does not just come from the current team, but the incoming class of recruits as well. Over 25 emails a week have appeared in his inbox, with high school fencers claiming why they have what Columbia fencing is looking for. Some potential recruits have even gone so far as to prepare the spreadsheets of their statistics with which Aufrichtig's selection process typically begins.

Though the historic 2014-15 Columbia fencing season has officially come to a close, the work required to repeat as Ivy and national champions does not stop in the offseason. That applies to both coaching staff and fencers because, to Aufrichtig, the work put in when the fans aren't watching is what matters most at the end of the season.

"They can be content. We can sit back. But no, let's see what we can do with this," he said. "The title won't mean anything, but the way we got there I think is what's going to mean a lot to the team."