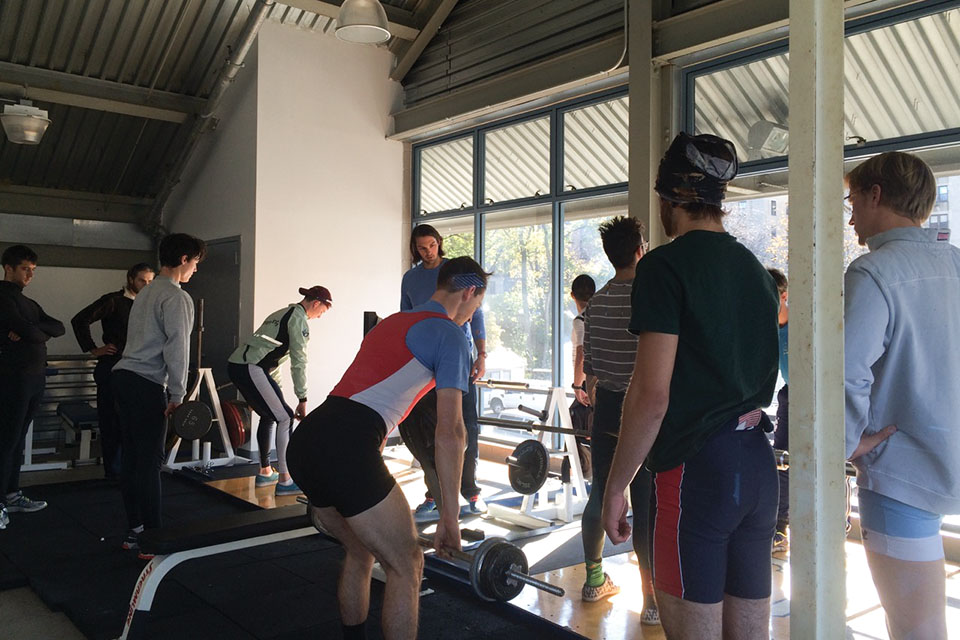 When head coach Nich Lee Parker sized up the 2014-15 season for his lightweight rowing crew, he knew that preparation would be paramount. After last year's finish when the team was just two seconds shy of a national championship—Parker's mission focused on a critical task: maximizing speed in whatever way possible.

For many, the solution to closing that two second margin might simply be to work a little harder. But for Parker's team, the solution has been to work smarter.

"We wanted to make a shift in how we approach the whole year," Parker said. "We thought we could've had a better end-of-year performance."

The new approach, which Parker calls an "integrated model of performance," involves the input of several outside specialists. While experts contribute specialized knowledge, Parker busies himself with synthesizing that information to optimize team speed.

German—a sports physiologist who graduated with his master's from Purdue—serves as the Lions' strength and performance coach. His specific assignment from Parker is to help construct a regimen of properly sequenced workouts that will give the Lions the best possible chances at the IRA National Championship Regatta in late May.

Based in Indianapolis, German flies to New York several times a year, working with the team during both fall and spring training camps, as well as before IRAs.

Parker first met German when he was the latter's first-year rowing coach at Purdue in 2007. After Parker began coaching at Yale and later Columbia, the two stayed in touch.

Normally, German's role would be fulfilled by a member of the coaching staff to keep all team operations internal. Parker, however, has taken a markedly different approach by utilizing the sports physiologist.

"I think it's very cool that Nich acknowledges, 'maybe somebody can do this one part better than me, so I'll let them advise me,'" German said. "Nich knows that if he can have somebody who can give them advice in one area to make the team faster, then it's worth doing."

Parker says that with the help of experts like German, his job becomes easier. His duty is simply to know enough about their respective fields to organize the aggregate information toward maximum output.

Meanwhile, German's specific purpose goes beyond the typical weight lifting and training that any nationally competitive crew would undergo. He spends much of his energy on writing a long-term, elaborate fitness routines that encompass on-the-water training, winter preparation, and weight room workouts.

"We've really taken a big-picture look at it," German noted.

Throughout the offseason, the coaching staff reviewed the data they obtained from the workouts written by German. Thanks to constantly evolving technology, Parker and assistant coach Jesse Foglia also use heart rate monitors, which are connected to an iPad, to track the intensity of every rower during workouts. As a result, when the staff sets a specific intensity goal for a given workout, they can provide instant feedback if a rower is working too quickly or slowly.

Parker also monitors the sleeping and eating habits of his rowers, which allows him to observe not only strength training, but also many different factors in correlation with their performance on the water.

With each timed workout or race, German, Parker, and Foglia will adjust the workout plan to better prepare the crew for IRAs.

"A lot of college rowing programs don't have someone like me, so in a sense this is a pioneer project," German said.

German says the Columbia team is likely one of the physically strongest teams in the country. He notes that this could be advantageous, given that many lightweight rowers devalue strength training in order to maintain their specified weight.

German is not so sure that the trade-off is necessary. "You can have a high level of both strength and endurance," he said. "You just have to know how to train for it."

Parker emphasized that his team is mature enough to meet that challenge.

"This group can handle a more complex training program," he said. "Physiologically, of course, it's more demanding. But the real drain of the program we've been able to do this year is just emotional."

Perhaps it's not surprising that the No. 2 Lions have won every cup race this spring to date. The Light Blue has its largest regular season matchup this weekend when they challenge Cornell, the reigning national champions, as well as hotly performing, No. 5 MIT.

The IRAs will be a great measure for how this one-year-old approach works. So far, Parker and his rowers are confident.

"If people want to know if it's working, in this past year we've broken every single ergometer record that ever existed for Columbia lightweights," Parker said.

The results of the remaining regattas will speak for the effectiveness of the lightweights' new approach. But what is certain is the with a new mentality, and help from German, the team will stop at nothing to finish what they were just two seconds away from achieving last June.