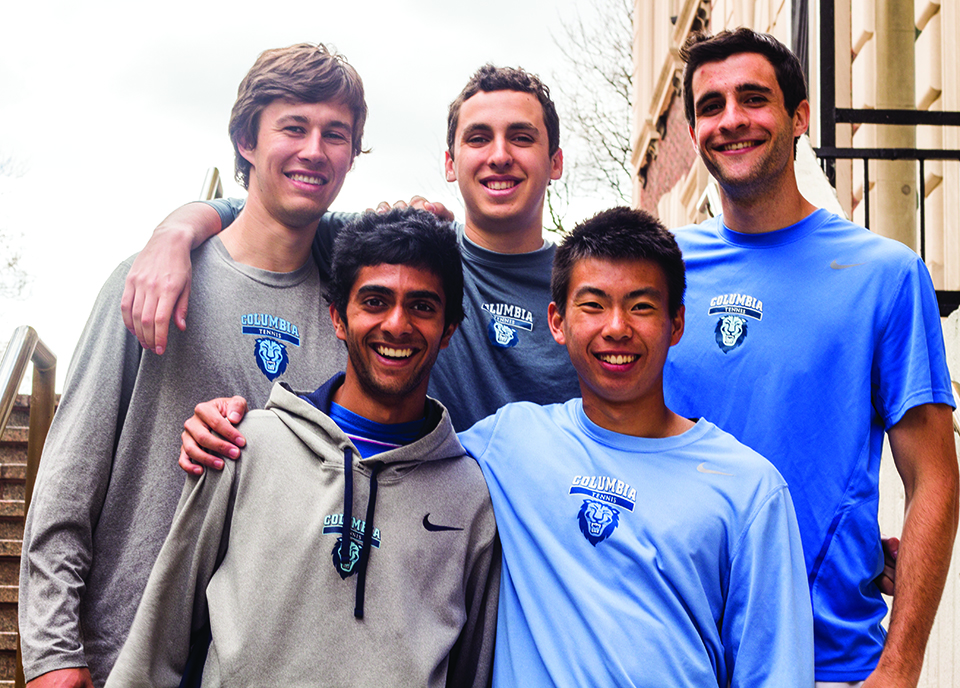 Five seniors have been the engine behind the best tennis program in Columbia's history.

Bid Goswami's Greatest Generation is moving on to bigger and better things, but not before it made an indelible mark on Columbia and its tennis program.

The team's five seniors—Ashok Narayana, Max Schnur, Eric Jacobs, Winston Lin, and Bert Vancura—have transformed an Ivy contender into a formidable national program. According Goswami, the Greatest Generation has been the engine behind the best tennis program in school history.

The team reached a program record No. 11 national ranking, the highest of any Ivy team since the 1980 Princeton squad, before losing to No. 3 Virginia in the Sweet 16 of the NCAA tournament last weekend.

The Light Blue competed on the heels of a grueling finals week, and appeared fatigued throughout the match. But the Lions showed grit in the face of adversity, though Vancura and junior Mike Vermeer arrived at the host city just hours before their match against the Cavaliers.

"I was really proud of the way they played," Goswami said. "They were ready for the big fight."

"We have had great people playing for us in the past if you look at all my 33 years," he added. "We lost some and won some. But what this group of guys did from day one, they worked hard, they set the example for the rest of the team, and they're not selfish. It was a team atmosphere they created."

The group's individual achievements over the past four years seem endless. As first-years, Narayana and Schnur set the stage as a consistently dominant doubles team, bringing home their first of four first-team All-Ivy honors. Meanwhile, Lin won the Ivy League Rookie of the Year Award.

Narayana and Schnur added the Indoor National Championship in their junior year, which included a win over the top doubles team in the country. The duo ultimately earned a top-10 ranking, as did Lin in singles.

Lin earned a pair of All-American honors with stellar junior and senior seasons. He earned multiple titles between the Ivy-Plus tournament, home to the most prominent northeast teams, and the regional tournament.

Aside from being great tennis players, the Light Blue seniors have proven to be some of the best sportsmen and student-athletes on campus. Narayana earned the Northeast Sportsmanship and Leadership Award, while Vancura took home the Eisenhower watch, which honors the senior male student-athlete with the best cumulative academic record.

Goswami said it has taken some time to comprehend the reality of losing such an impressive leadership core.

"It was more emotional for me this [Saturday] morning," he said. "I felt a pain. It took 48 hours before I realized this is over. The grand team we had gathered is finally going away."

Goswami said he is looking forward to hearing about the Greatest Generation in the years to come.

"Apart from tennis, they have all improved as human beings, and I think we'll hear more from them in years to come," he said.

Lin and Schnur will look to play on the professional circuit, after which Schnur is likely to attend law school. Vancura will work for molecular biologist and Nobel Laureate Richard Axel. Narayana and Jacobs have already secured lucrative jobs as well.

Goswami said that the departure of the Greatest Generation will test the remainder of the team and afford the players an opportunity to prove their mettle. But he added that the leadership of the graduating seniors—which has shifted the program's culture so drastically—will be seen for years to come.

"When I was sitting alone with Winston this morning ... I realized it's the end of an era," he said. "I have been very blessed and I am very proud to have had them as our players."